I use Thule hood loops at the front of the car, each secured under a nut that was attached to the frame of the car. At the back I use simple loops of sail rope tied to fasteners on the rear deck under the hatch. I connect the blue Thule stern and bow lines with simple loop-to-loop connections. 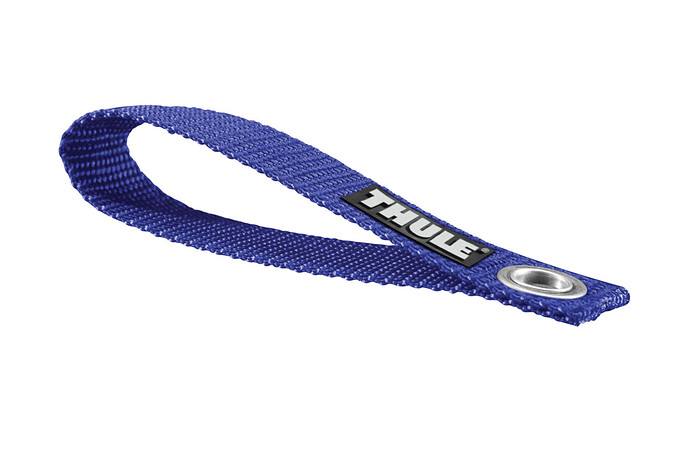 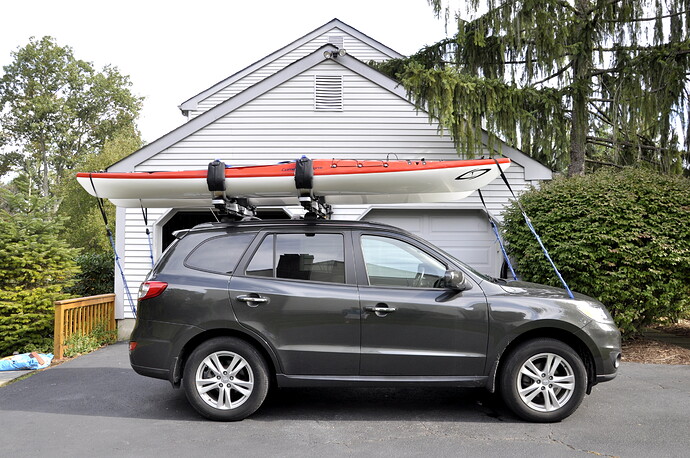 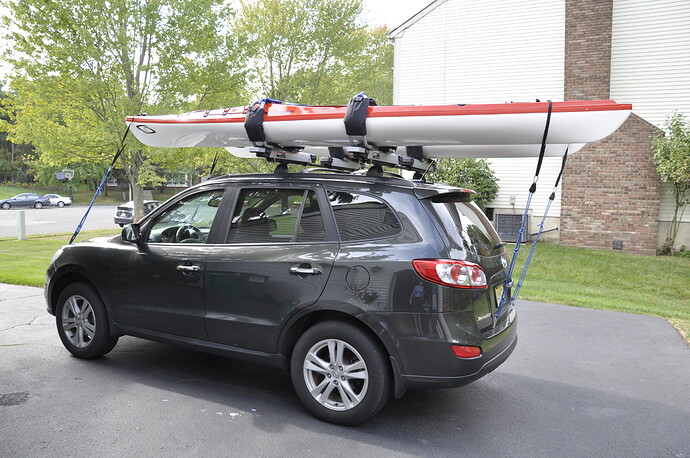 In over 8 years this has worked very well for many trips from South Carolina to Nova Scotia and with no damage at all to the car’s paint.

I have just been using the same type of cam straps that I go over the canoe with front and back. My canoe I drilled and put a lining loop bow and stern, I just thread the cam strap thru the loop and thru the hood or hatchback loop and buckle it and cinch it up. It is simple and no metal parts except the cam.

Good to know, thanks! I have plenty of marine carabineers so i’ll have to see if any are big enough. I might finally find a use for them as opposed to just having them “in case”

I do have a vehicle with towing eyes, front and rear, and I’m not looking forward to replacing it in the future. Seems like such a silly thing to remove sigh.

I made something similar to those Thule hood loops. I just bought about 2’ of tubular webbing from the local REI at 45 cents/ft, cut it in half and melted the ends, folded it over and used a soldering gun to put holes through the ends. (The soldering gun melted the holes together, which didn’t hurt.) Popped the hood and found a small bolt holding the fender on, pushed it through the webbing hole and tightened it up. Fold the flap toward the engine and close the hood when not needed. For the stern, I’ve got a trailer hitch with chain eyes I can tie to, but similar straps could be made to work for a hatch or trunk.

I bought black webbing, but if I do it again I’ll probably use the “tan” so that when I take the boat off, I’ll be more likely to see I’ve still got the strap lopps sticking out before I drive off.
https://www.rei.com/product/737298/bluewater-1-climb-spec-tubular-webbing.

You can buy a grommet maker set at big box stores (HD or Lowes) for about $8 that makes 6 sets of loops. I usually give them away to friends.

This is a fantastic visual for me because I have a 2012 Hyundai Santa Fe! I am using the factory crossbars for now, but I’m only transporting one kayak at the moment. What roof rack model do you have on your vehicle?

KFB: Are your straps encircling the kayak hulls? I can’t really tell from the photos but it looks like you only have the straps through the loop of the J-racks and down to the rack on the inside. Please tell me I’m wrong and not seeing the whole set up.

I trust neither aftermarket racks nor their accessories to secure the load on their own. My straps always go completely around the boat hulls AND around the added rack and the car integral rack. Trusting just a j-rack not to fail is too much of a risk without the failsafe of securing the boat and rack directly to the car structure as well, IMHO.

Those photos are from 2014. I posted them simply to show the tie downs. My method of securing my kayaks has changed since then although that is exactly how Thule recommends the boats to be secured and I never had a problem.

Hullavators aren’t J-racks. And when I realized just how flimsy the Hyundai factory rails are I had my dealer replace all the factory nuts (under the headliner) that had no lock washers at all and constantly became loose with nylocks.