Correlation of hull length and speed

And make sure it is also not the heaviest worm.

I currently paddle an Eddyline Equinox and plan to for a long time. I used the Tsunami models because I assumed they have a similar hull design and I wanted to consider only the effect of length. I’m a slow leisurely paddler who has to limit time in the boat due to hip issues. Not looking for the fastest boat. Just trying to satisfy my curiosity and figured folks here could offer reasonable answers.

Ah, now with this detail I can provide a more relevant answer than just a funny graphic.
I owned an Eddyline Equinox for almost exactly a year. It was my first “real” kayak. I did a number of long - multi-day trips in the boat. On one trip - 4 days on the Suwannee River - self supported (including water), one of my paddle partners brought a Werner Ikelos (691cm sq.) for me to try. I had been using an Aquabound Whiskey (613cm sq.). What a HUGE difference it made! After trying it I never put my Whiskey together. It stayed on my deck for the entire trip and I ordered an Ikelos as soon as I got home. So this is adding another element to the equation - the paddle.
Back to the boat-
The Equinox was a great boat to learn with. However, once I started to demand more from the boat - particularly edge turns and faster turning response in general, I knew I needed another boat. In fact, I knew that I need two more boats!
I now own an Eddyline Sitka LT. At 14’6" and with a 23.5" beam, it is a much more capable boat - skeg down, it paddles much like the Equinox but is noticeably quicker to speed and just feels more lively in general. Skeg up, and I can maneuver easily down the tightest creek and easily carve edge turns.
So I bought the Sitka LT for smaller creeks and short trips. I also bought a Current Designs Prana - now this is a FUN boat! At 17’ and 21" beam it feels very fast and cruises effortlessly. And despite it’s 17’, it handles much better than the Sitka. Even easier to turn and I can do long sweeping edge turns (so much fun!)
So to sum it up - your going to need two new boats and a new paddle.

String, you probably just paired up with a competent athletic paddler. My sister is six years older and she can more than hold her own. I own two Pungos. They can’t compete with a well designed sea kayak, but I wouldn’t rate them as a slow boat. The main problem is they don’t handle wave over 18 inches as well as a closed cockpit boat.

The original post wasn’t really about fastest boat, it was about assessing how width and length impact speed potential. It specifically mentioned the 125, 145 and 175 Tsunami models. I mentioned in other posts that I originally joined the forum to solicit advice on a faster boat. Somewhere along the way, I decided that I valued the feeling of comfort and the confidence I get from the boat, more than the desire for speed. I look at the boats in the gallery and at times wish I could fit it one or develop the skill it takes to keep it on edge. I can’t compete, nor do I want to match other members, but I enjoy sharing the stories of other members riding on the edge, looking at the sleek shiny boats, seeing the places the boats take the paddlers. To the question about where is your favorite place to paddle, one response was, “the last place I paddled.”

After 15 years of paddling a Pungo or one of those three boats mentioned in the post, I looked at my logs to answer the question the best I could, and came up with an educated WAG. It closely matched the formulas that a few members posted. When you guys are riding the big waves or threading through the gentle curves, I’m calculating and working formulas in my head. Thank to the posts, I found out that my calculations were correct. There is no dark side here and no can of worms.

When considering a trip to a new location, I make a time/distance chart, to shows how long it’ll take to get there at an avg spd. I also found some charts that help put some of the questions in perspective. 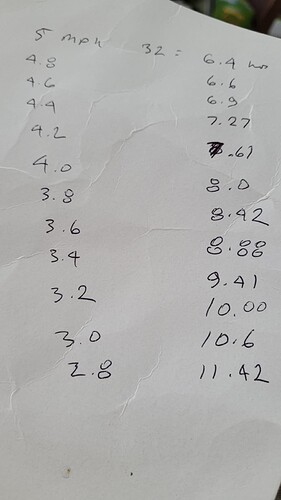 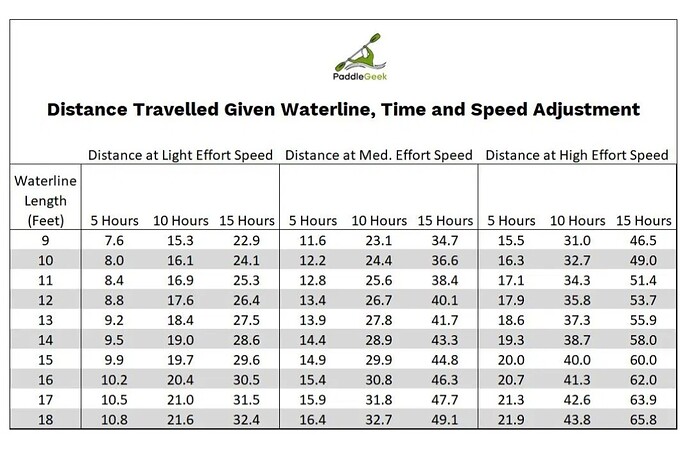 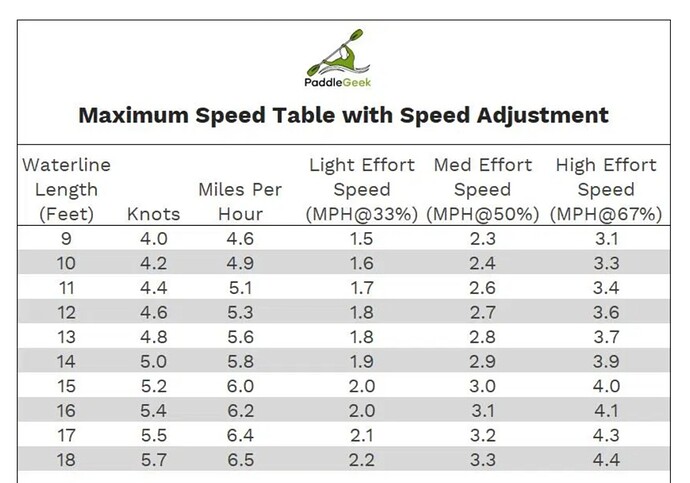 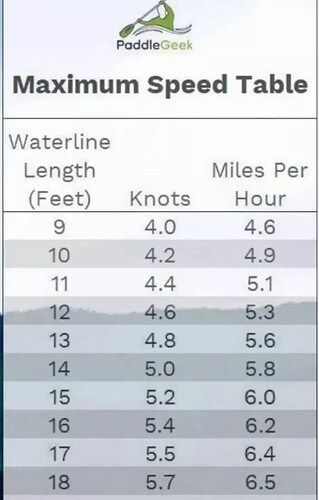 Anybody with questions about the Tsunamis . . .

The integrated propulsion/navigation biosystem IP/NB is the main regulator of “speed” in a kayak.
The stars are matter, we are matter, the math formula doesn’t matter.
Unless you want go on full Lisa Carrington( perfect IP/NB) then go with that style of boat. Then you can bone up on your nautical engineering math skills between workouts.
Peace J

Bow rocker is extreme in racing sailboats. It may be for stability… Placid Boatworks Shadow regularly wins the 90 miler in the kayak class. It has significant bow rocker
Shadow - Placid Boatworks,

Deadwood ( no bow rocker ; the sumberged part of the bow in the water) adds to drag.

That’s a fast boat, and a good looking series to boot.

Paatit, I’m just happy being able to estimate how long it’ll take me to get from point A to point B. I can only go twenty miles, because that’s all the fingers and toes that I got. I don’t want to get out there and not be able to get back.

One other thing that matters is seat placement. Recreational boats have the seat set back, from the bow, 56% of the boat length.

Racing boats have the seat further forward. This is to keep the boat from climbing the bow wave.

I know it works because I built a Pax 20 and found it hit the bow wave wall. After my EFT ended up in a million pieces spread across I-75, I ripped the deck off of the Pax and put a woodstrip deck on it, I also moved the seat forward just over a foot. That allowed the boat to go .67 mph faster.

That also going along with the frequency of the bow wave having a longer period in a longer boat, that makes them much different than in a 14 foot boat.

Athleticism is important but muscle mass is not, making a boat go fast has more to do with cadence and rhythm than sheer muscle.

List of kayaks broken down to HPK,FSK & SK based on that system. 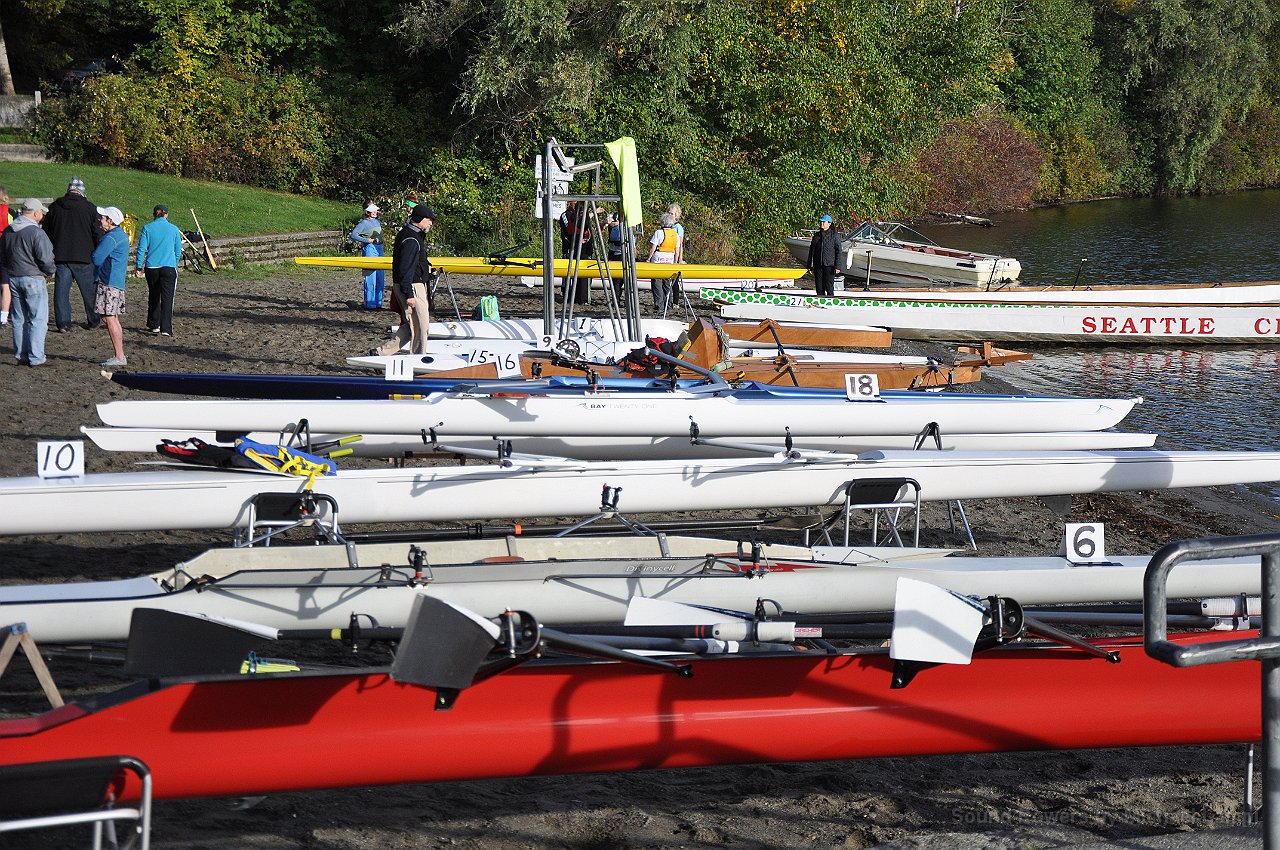 How Much Faster is the Longer Kayak? • PaddlingLight.com

This thread just sent me down a 2 hour internet rabbit hole!

My best answer is to try out a few boats if you can and see what feels fast and handles best. I would suggest a Current Designs Prana, maybe a Carabou (if you can find one) ,also the CD Expedition, or one of its cousins. The longer P&H Cetus and even a Valley Nordkapp. My boat for speed , distance, and all conditions is NC Expedition (19’-2").

What I want to know is in what length boat will I have the most fun.

CraigF. Interesting about the seat placement. Pax 20 discontinued. How does moving the seat change the way it handles waves, or since it’s a flat water boat, is that negligible. The Delta 15 has a seat that moves. I considered how it would help in weather cocking. But wonder about the benefits you mentioned. Now you made me think.

I suspected what you mentioned about muscle being less important than cadence and rhythm. Muscle helps in a sprint, but when I muscle-it, the acceleration doesn’t feel right. Its like pressing against something as the blade cavities. By focusing on precise form and increasing cadence, the boat just accelerates away. The same was true with spinning on a bike. Once I learned to spin, speed on climbs doubled and I added 5 mph to descents.

The only boat I found troublesome regarding hull speed was a 9 ft rec boat. The bow wave caused the stern to bury and wash the rear deck nearly to the the cockpit. I couldn’t figure how the boat accumulated about two gallons of water during a trip. Water was coming in a hole that I drilled in the stern peak to drain water.

Doggy_Paddler, probably all of them.

True! But so far my 16-footer feels just fine.

Roger that. Getting Back. That matters!
Peace J

Got to have a favorite. Even if it isn’t fast.

Agree getting back matters, but too often the finish line comes too soon.

I taught her to paddle. I guess I’m a good teacher.