I’ve been getting really into paddling over the last year. I have rec kayaks and haven’t had many complaints other than tracking and drag. That said, I made the mistake of looking at touring / racing kayaks. It was only a matter of days before I took home a used '99 QCC 500X found locally. With all that said, I have some pretty serious concerns.

First and foremost, I think I damaged the seat while the boat was in transit. I’m not sure if this is structural or cosmetic, but the repair doesn’t look easy and I have never worked with fiberglass. 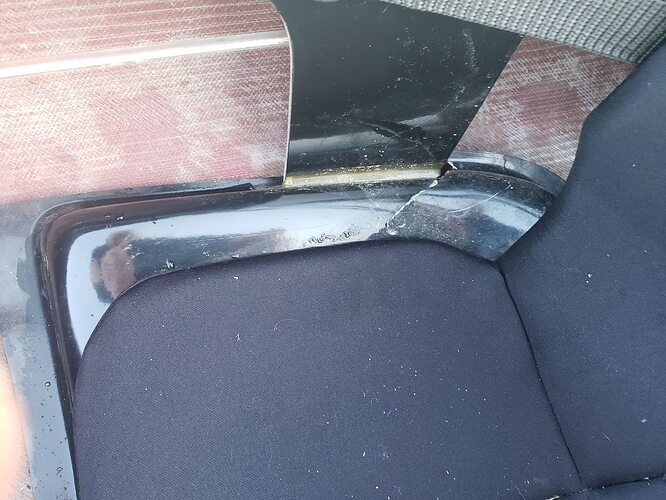 My second concern may be related. I have been told this is a demo model, made of fiberglass. It has inflatable bags at the bow and stern rather than bulkheads. I am a really tight fit at 6’4" and 250lbs. To get in, I need to sit on the back, grab the sides, and scoot forward. This causes some creaking noises. Should I be concerned about the lack of reinforcement? Maybe the creaking is caused by the seat rubbing?

I doubt the seat is structural. I would remove the seat if possible, and do any fiber glassing from under the seat. Otherwise, I would do the repair from the top. Is the seat attached to the floor? It would be good to know what resin was used in the manufacture of kayak. Doing the fiber glass work is fairly simple.

Check out this post on removing a seat epoxied to the hull if that applies to your kayak.
Removing Seat Epoxied to the Hull - Advice - Paddling.com

You can also shape minicell to be a seat, in fact if this boat is such a tight fit that may be a plan longer term. But for now per above, seat is likely ok.

Here’s a picture of the seat in my '10 QCC 600X. It looks like the same seat but in blue. You can also see a bead of what looks like epoxy gluing the seat to the vertical panels on the sides of the cockpit. Looking at photos of other QCC kayaks online, I think they’re all glued like this. So I think it may be possible to carefully cut into that bead of glue to get the seat pan out - maybe with a Dremel tool or an angle grinder with a cut-off blade. That would make repair of the seat pan easier, or have the kayak ready for a new foam seat.

But I do wonder if there is some structural function to the rigid seat pan glued in. It would certainly stiffen the cockpit rim, especially for sliding into the cockpit from the rear deck. If it were me at 250 lbs, needing to put all of my weight on the rear deck to slide in, I’d try to repair the seat and then glue it back in to keep that extra structure intact. 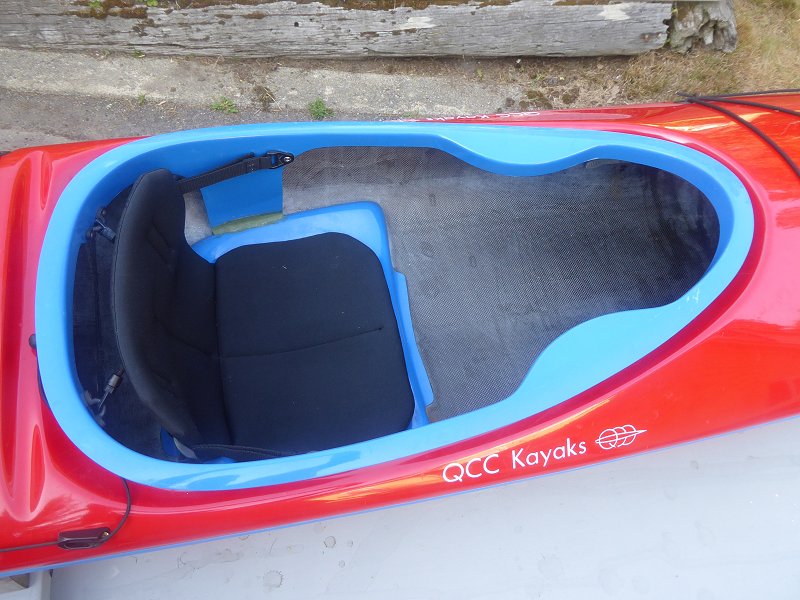 To make a decent repair you need to remove the seat glass seat from underneath. Then finish the top the top by feathering in a few layers. Daunting task if you never worked with glass. Boat may be a bit small for your size QCC 700 would be better suited for your height and weight. Many sea kayaks you need to enter by slid in from sitting on the combing / deck behind the seat.

How did the seat crack like that? Did it happen when you strapped it on the car!

You can use West Systems epoxy to patch it.

Seat is adding some structure. QCC boats don’t have the heaviest layup schedule as far as I know. All my CURRENT DESIGNS hulls have a gelcoat crack just behind the rear bulkhead. People get on the rear deck and slide in. I put extra glass under that area to stiffen the deck up. I have a 3 more to do.

When I put wide base seats in I add some glass below the seat from bulkhead to about 18" in front of the seat. I have to see saw them on the bulkhead to launch or get them out of the water.

I’d help you if you’re near Long Island NY

Thanks all for the replies. I called Wenonah/Current Designs and they have a plastic seat they now use. They said this seat works well to replace early QCC seats. $140 may be worth having the all new rigging if it’s a drop-in replacement. 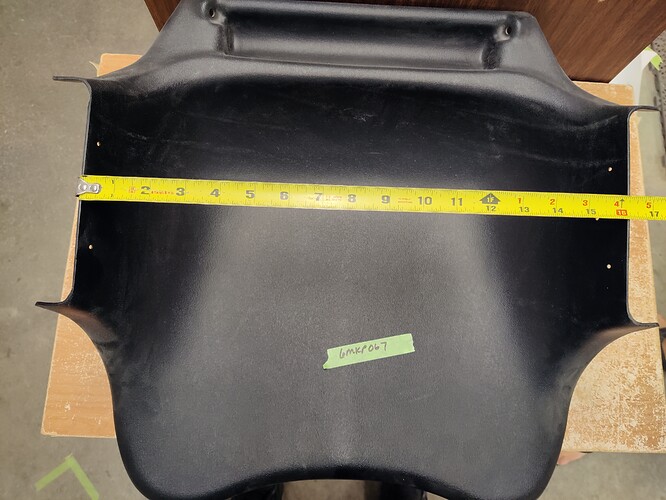 As for how it happened, transport is only my best guess. I didn’t notice it when I bought it, but did notice it when I went to load it on my trailer after the first outing. I would imagine I would hear a disgusting cracking noise if it were my weight that caused the crack. I transported it on a flatbed trailer with rather thin foam under it and the straps were somewhat tight. Next time I’ll use a lot more foam and let that apply the pressure, and not in the middle of the hull. Live and learn.

I can keep my eyes open for a 700, though I doubt I’ll be able to pick one up at the same price. I only justified it as I have too many cheap kayaks and I’ll be listing a couple soon. If I can get $275 each with paddle I’ll break even.

Ah, I get it now. The seat used to be glued to the hull, but all the epoxy in front and half in the back has released. This unevenness caused the tear. There wasn’t much epoxy used to hold it down… certainly not a continuous bead. I can see and feel where the glue used to be in the front. On the plus side, that makes removal that much easier. Now to peel apart the remaining epoxy… Wish me luck. 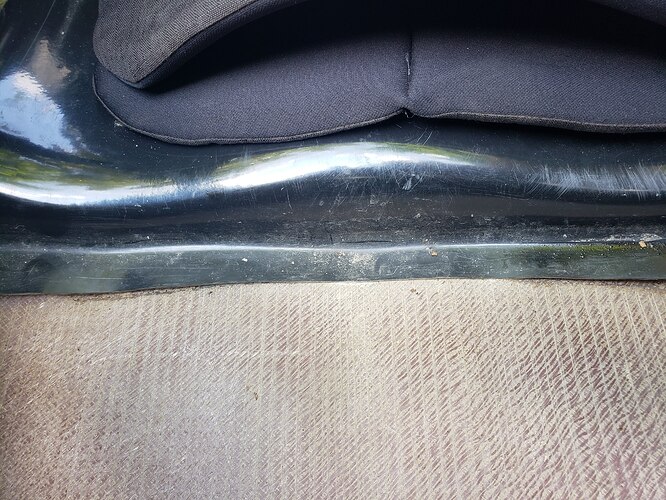 I put the same CD seats in all my CD hulls I use the wide base it’s 17" not 16" gives me tad more room for rotation. They are actually wider than under the combing. They are really comfortable seats. I’m 6’ 235 38" waist.

There wasn’t much epoxy used to hold it down…

That’s interesting. In the photo of mine, a 2010 build vs your 1999 build, it looks like they used a much bigger bead of epoxy in later years. Maybe the epoxy breaking lose was a problem with the older ones.

The plastic replacement seat has mounting holes on the sides so it must just attach with screws or rivets.

On the 500X vs 700X, Wenona stiill maintains the QCCKayaks.com website, and the “Choosing a Kayak” tab lands on the 500X for >200 lb paddles who prefer stability over speed. And the 700X for paddlers who prefer speed over stability. The cockpit size appears to be the same for both models.

A Current Designs Extreme / Nomad is fast and a perfect match for your body and weight. Good one goes for 800-900. I just bought another one. 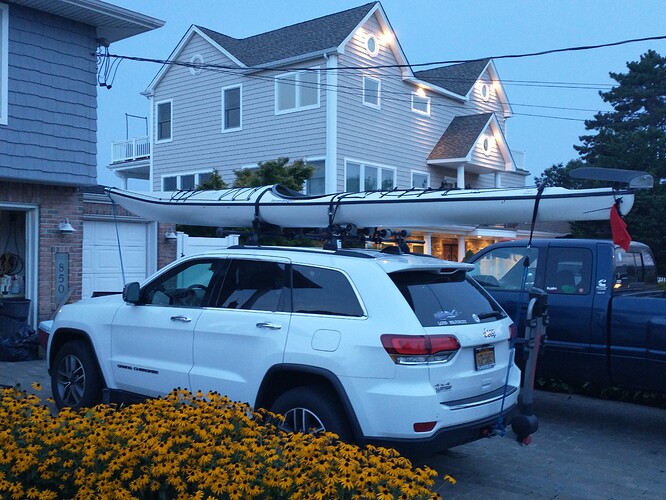 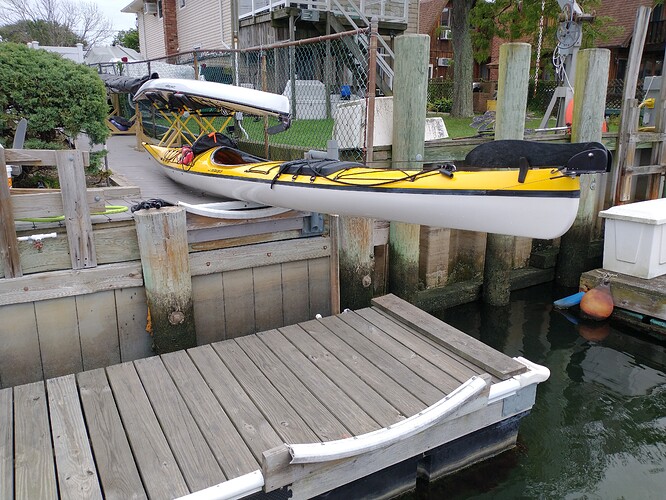 CD Expedition I got for 900 year ago. higher deck, longer cockpit easier to get in. Tad faster rounder bottom than the Extreme. Maybe 1/2 mph.

I’ve been advised that it is dangerous to sit in a fiberglass boat when it is resting on the hard ground rather than the water. In my case the warning was issued regarding my solo fiberglass canoe (by a guy who makes them.) The pressure that your body weight places on the shell without the “give” of the hull resting in water can apparently cause you to deform and break the boat.

Did you try entry into the boat as you describe when it was on the ground? Perhaps your needing to sit on the stern deck to get into cockpit put enough stress on the cross section of the boat that it deformed that seat attachment area and caused it to split.

I’d be interested to hear other people weigh in on this. I was surprised at the warning on sitting on my canoe’s suspended seat on land. Perhaps this does not apply to kayaks because the hulls wrap around and the deck would make deformation less probable.

inflatable bags at the bow and stern rather than bulkheads

One other comment. My 600X bulkheads are very thin composite panels that are glued in. When you tap on them, they’re like the skin on a drum - no significant thickness. They wouldn’t provide much additional structural reinforcement.

I wonder if your 500X is an early prototype. I’ve never seen one without hatches and bulkheads.

They give you 6 pop rivets. But you can use oval head screws and finish washers if you don’t have a pop rivet gun. 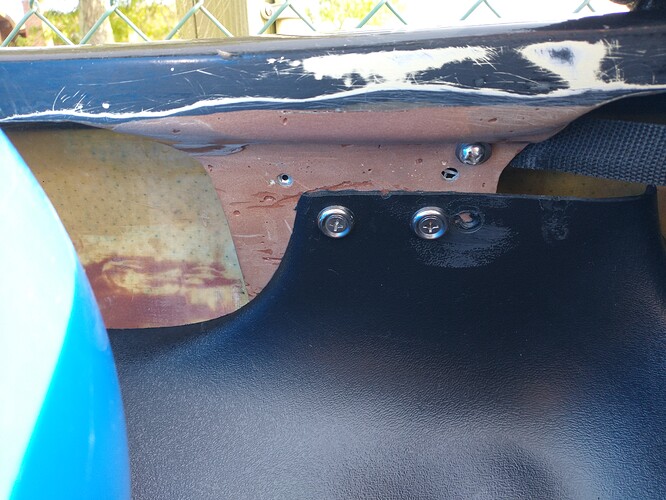 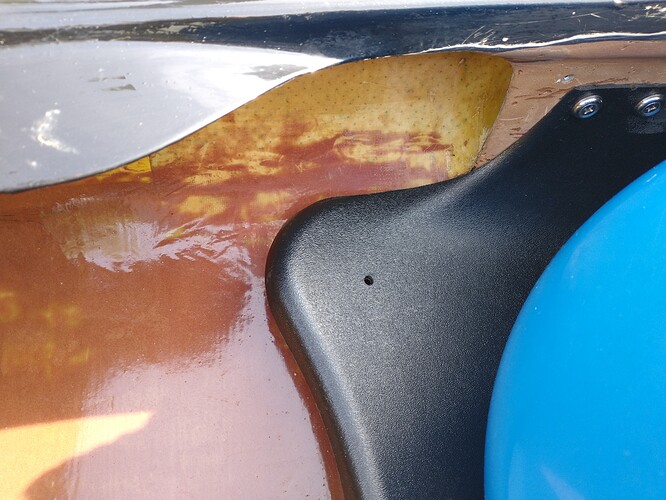 I cut the seat down to make it lower. Be fixing it up cosmetically soon. I cut the combing legs off and moved them back so seat could go back more. I just moved seat all the way back few weeks ago and I just screwed it as it’s coming out again soon.

I wonder if your 500X is an early prototype. I’ve never seen one without hatches and bulkheads.

I was wondering the same thing. It has some interesting “features”. For example, there is a PVC plug installed in the stern deck.

The color combo is also interesting. This is truly a unicorn of a vessel. 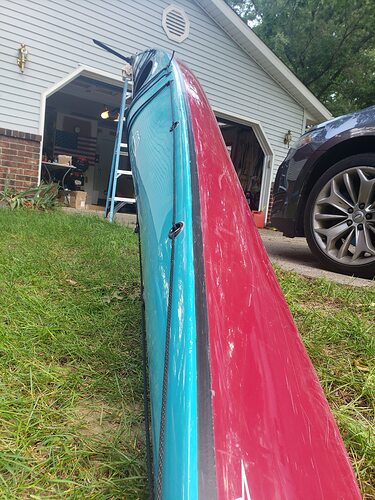 Serial number starts with EGY and ends with 0799, if that is any indicator of what this actually is.

I think 0799 is july 1999 and the PVC Port is for access to the stern. Perhaps for mounting the rudder.

Early QCC boats could be ordered with zero, one or two bulkheads/hatches. I believe they were labeled Q500, Q500S and Q500X. I remember seeing a no-bulkhead boat for sale but I didn’t buy it.

Yours is unusual, I wonder why it has the rear access port with no rear bulkhead - seems unnecessary, except maybe to give access to anchor the rear float bag.

I have a custom Q400 with two bulkheads but only the rear hatch, since I like a clean front deck and don’t carry much. They did not offer the single hatch boat at the time, but did it anyway, and hid a drain fitting in one of the forward deck fittings to make up for the lack of a hatch, it’s pretty slick. Yours was definitely a custom order with that wacky color scheme.

I think the replacement pan PaddleDog shows above looks good - the wide base is worth it (I have it on a CD Pachena). I find that sitting directly on the seat pan is quite comfortable and lowers my CG a noticeable amount, so worth a try.

Pad gets messed up from my ass rotation. It’s held by 4 auto type plastic push pins. You can feel the difference being 1/2" lower. Even if it’s in my head only

FYI, the Q500 was originally designed by John Winters and sold as the ‘North Sea’ by Swift Canoe & Kayak in Canada. The Q400 was called ‘Caspian Sea’. I think the designer statements are worth reading to understand what Mr. W. had in mind for his boats:

Fast but for not much height under the deck.