I use the G-flex 655 thickened epoxy adhesive. It comes in two tubes. You squeeze out equal parts and mix for at least two minutes. If you get bubbles, they are hard to get out of the mix. When mixing try not to stir. I have “tiny bubbles” in mine that is how I know. I don’t think it hurts anything but the appearance.

The epoxy is somewhat like toothpaste, but a tad thicker. Maybe more like PeanutButter. apply it proud along the edges. When it hardens, I file and sand it even. I set the paddle horizonal with the blades horizonal and rotate them 180 degrees every minute or so. In about 15-20 minutes they should have thickened enough not to sag much. Once they don’t seem to sag, I then turn the blades 90 degrees, so they are vertical. Check back over the next few minutes to make sure it isn’t sagging. Heat will speed it up.

Just don’t
lick the stirring stick.
It only resembles peanut butter.
If you make the mistake, quickly gargle with vinegar.

I like my ottertail canoe paddle which tapers at the tip. My next GP will be tapered at the tip.

The taper on the tip doesn’t have to be as drastic as on a ottertail canoe paddle. Don’t take it as far back so your grip area isn’t on the taper or else your hand will want to slip of the end when doing extended paddle rolls etc. A little bit goes a long way and gives more than you would expect.

Here is a picture of three different paddle shapes. The first is what most people are familiar with. Widest point at the tip and a taper from shoulder to that point.

The second has widest point at the tip and then parallel sides for a bit…then a taper to the shoulder.

And the third is a tapered tip, some parallel side and then a taper to the shoulder. 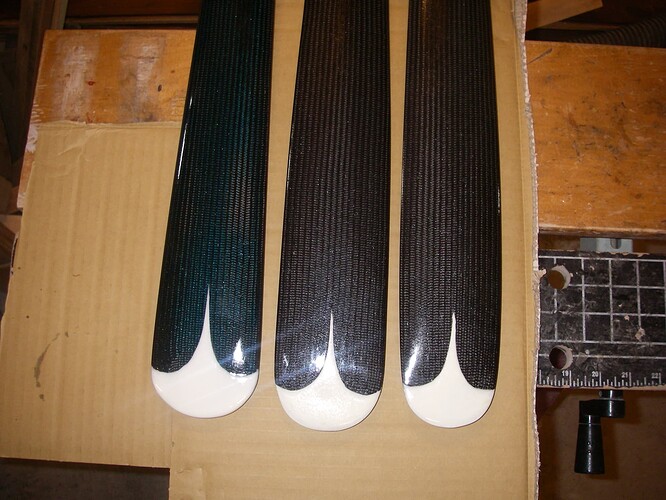 The other thing I like to change is the abrupt shoulder cut with a right angle or close to it.

Who does that? I don’t think I’ve ever seen anything steeper than a 45 degree angle, which is what I typically use for my personal paddles.

I probably described it wrong, but it was an abrupt cut from the loom to the place where your fingers actually rest when paddling . When I was making my first paddle someone sent me a link to guy (Cape Falcon? I don’t have the link anymore) who makes kayaks and paddles, and suggested I follow his design which is a bit different than what I am following now.

Anyway with the current paddle I did a smooth transition and I stuck to keeping the tips a bit thicker since I am worried about the wood splintering; I can thin them down more later if I want. We are having 15-20 kt winds, and I’m waiting for a calm day to try it out.

When I was making my first paddle someone sent me a link to guy (Cape Falcon?

I love Cape Falcon’s instructions. I even bought his Greenland paddle PDF. But nothing compares to Brian’s book, really.