We ended getting a North Shore Atlantic-2 demo boat - from Riverside Kayak Connection in Wyandotte, MI. Haven’t got it out on the water yet though. Will post again on our thoughts, versus our expedition-sized tandem, after we’ve been out.

Nice find! I’m looking forward to hearing about it.

North Coast or North Shore? If the latter, I demoed a North Shore Atlantic 2 a few years ago and really liked the kayak.

Stellar kayaks are now made in Europe. Previously they were being made in Thailand, not China. Best quality and lightest of any of the tandems out there.

As to racks - look at GoodBoy Kayaks located in the USA. Cliff Roach builds the most economical and solid racks anywhere - and they don’t require bow or stern tie downs for any length kayak as it is 8 feet between supports.

Check them out!! I own two of them and they are the best by far!!

Thanks for the Stellar and rack info. We will check it out.

This evening, when I looked at the Stellar web-site, it certainly wasn’t clear that the boats are made in Europe. There are links on the site showing factories in China. If they are making them in Europe it would be nice for them to make that clear. If the links on their site with info on a Chinese business owner are for products besides the Stellar kayaks that could be made a little clearer. Do you know where in Europe that they’re being made?

We’ve got about 8-10 hours in the North Shore Atlantic-II now. We like it a lot. We like the lower volume for unloaded day-trips. Even though it is about 13 lbs lighter and 1-1/2 feet shorter than the Libra-XT it is much easier to car-top. We like the rudder raise/lower controls a bit more on the Libra As there are two separate positive pull cords 1 to raise and 1 to lower. The Atlantic-II uses bungee-tension to lower and a positive pull to raise. I like the port/starboard rudder steering controls better on the Atlantic - as the ones on the Libra pivoted about a point and in such a way that there was no place for my knees to go to (other than being forced into the underside of the deck [could be operator error/ignorance though]). We usually paddle using synchronized strokes but during those time where unsynchronized paddling is required the Atlantic-II cockpits could be about 6” further apart. There is no ability to touch paddles in the Libra.

Just got the second double out of our hallway and into the garage. You can kinda’ see the volume difference in the photo when they are hanging side-by-side.

We still value the Libra for load-carrying on camping trips. 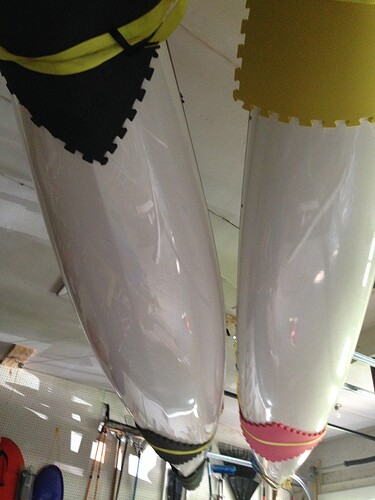 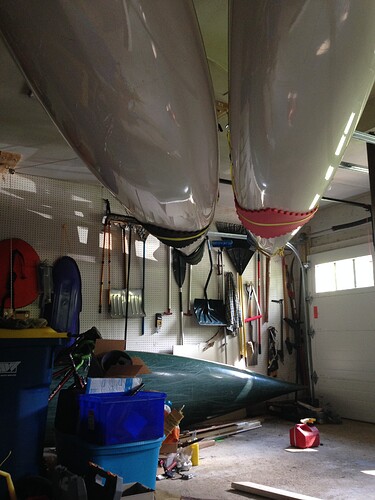 The Seaward Passat G3 in standard trim would probably work. I’ve spent a lot of time in Passats, and liked them enough to get one for the family. They paddle great and are built very well. Feels like you’re paddling a big fast west coast style boat. It’s 26 inches around the center hatch, but where you’re sitting in the cockpit, it definitely does not feel like a barge.

Seaward might be willing to make a low profile boat based on the Passat, would at least be worth a phone call. They’re practically a custom shop and have really good customer service. I’d recommend getting back bands rather than the full size seat backs they’re installing as standard nowadays.

Another option but would be challenging to get stateside.

Thanks for the info. We already ended up with a North Shore Atlantic-II.

Saw that right after I posted. Enjoy the new ride!

Glad you’re enjoying your tandems!
I have the Current Designs Unity. We had it out over the weekend and did some rolls. We seem to have that down fairly reliably. We came up slick and solid each time.
Last night we seemed to be cruising faster than I can ever remember outside of surfing. We turned against the current in a no wake zone, and we were gliding past the parade of power boats, one after another. A guy in one boat expressed his admiration with a nod and muscle-flexing gesture. I asked if anyone wanted to trade. One of the girls asked “What for? Y’all are passing everyone by!”
I needed to remind myself that I was just the stern paddler, with some real horsepower working from the bow position.
We even got to rescue a float tube for some kids swimming next to some docks that lost it to the wind. They knew exactly how to play us. A girl yelled to us “If you see a boat out there, could you ask if they would go after that float and bring it back to us?”, seeming to knowingly acknowledge us as a less than capable craft. We bit. They enthusiastically thanked us over and over, such that I suspect we may have saved some hides. We felt pretty good about restoring their carefree spirits.
I’ve had the Unity for a good number of years now. It’s a 2011 that I bought new in 2012. The deck and ends and curved surfaces are all stiff. The flatter part of the middle of the bottom in the center flexes fairly easily. This worried me when I first noticed it, but has never materialized as an issue.
It’s a 21’ x 26" tandem, so it tracks well and has really nice glide. It has just a slight tendency to weathercock, but slight enough that I typically do not deploy the rudder. So the balance is probably right where it should be. We enjoy playing with maneuvering strokes, and seem to bring it around fairly well.
In any case, thanks for the updates on the North Shore Atlantic II, and the comparisons to the Libra. There doesn’t seem to be all that much information out there on these types of tandem sea kayaks, so I figured I would add some here in case this thread would pop up somehow. In the hands of a pair of skilled paddlers, they really are incredibly fun and rewarding. If you have the skills and get the chance, give it a whirl in some nice easy surf. If that doesn’t leave you smiling, it’s hard to know what would!

Thanks for the message. We did get out on Lake Huron (launching at Port Austin) a few weekends ago. The conditions were calm - but first time that we were able to get out on a lake longer than two miles.

We need to work on having the ability to roll. We’ll probably start that in a pool next Winter.