Yeah, yew would be just because. It’s a nice looking wood and it ties in with one of my other hobbies. It would look cool on the wall, not that I would have much luck finding a long enough piece to make a paddle.

@bnystrom said:
What does that have to do with anything? Greenlanders never made boats out of fiberglass, either. There are countless products that have been improved by changes in materials.

Driftwoods that would have been available to Greenlanders in pre-commerce days were primarily tamarack, spruce, pine and fir, and later on commercial “deal” which was probably some mixture of the latter 3. IOW, similar to the s-p-f (spruce pine fir) you find at lumber stores today.

I don’t think too many people would equate fiberglass boats with traditional skinboats, or even modern synthetic skinboats, so what was your point?

I’m not suggesting anyone should stop using WRC but I am suggesting they consider the wider possibilities of much cheaper and readily available wood that was also traditionally used, if they care about the tradition aspect (and I’m not suggesting they should). These traditional woods are perfectly good and some may find them better if they aren’t prevented from even trying them because of very prevalent but historically quite recent paddle wood dogma.

Cedar as the common wood probably has to do with the fact it’s light, easy to work, common and with it’s natural oils it holds up better than most woods. Same reason it’s used for fence posts, shingles and shake.

Exactly. As I previously stated, it also has flex characteristics that make it ideal for paddles.

Let’s also not forget that there’s a huge difference in the needs of modern paddlers and subsistance-hunting Greenlanders; our lives and livelihoods don’t depend on our paddles. Even if Greenlanders had access to WRC, they may not have used it for paddles. OTOH, as recreational paddlers, we are free to use materials that provide characteristics - such as light weight - that are largely an afterthought when the ruggedness of your paddle is a primary concern.

It’s also simply not true that s/p/f is readily available in quality suitable for paddles. I have yet to see a single stick at local suppliers that I would consider for a paddle and I have actually looked a few times when I was buying lumber for construction projects. Sure, you can get crappy s/p/f pretty much anywhere for a relative pittance, but I won’t make paddles with substandard wood.

While there are some areas where WRC is scarce or even unavailable, you can find it in most placesand there is always at least a small percentage of it that’s quarter-sawn and suitable for paddles. I will not use flat-sawn wood for paddles, which is pretty much all I’ve ever seen in s/p/f. I’m also not willing to pay the crazy prices for Sitka spruce, which is the only “white wood” I’ve seen that meets my personal quality standards.

If people happen to live where you can get spruce or other woods of suitable quality, that’s great. If you like the characteristics of it, such as increased stiffness, that’s great too. Use whatever you like. What I object to is someone claiming that the most widely used wood for GPs - by a huge margin - is “inferior” to their personal choice. It’s just nonsense.

@roym said:
Carbon has become my go to

As long as it is authentic Greenland carbon fibre, similar to the type they have used for thousands of years, it is okay.

@roym said:
Carbon has become my go to

As long as it is authentic Greenland carbon fibre, similar to the type they have used for thousands of years, it is okay.

I think you need a special blade on your plane when forming the carbon also.

HMMM…maybe have to think this over some. … Not sure whether they had Bi-axle or unidirectional carbon available for thousands of years…guessing …just a plain weave.

I believe that the first introduction in Greenland of a Greenland style paddle in cedar was after the resurgence of the Greenland games and the subsequent opening of he games to people from cultures other than from parts of Greenland itself.

So in that sense, Carbon fiber , as a Greenland paddle medium , has about the same historical time frame. Thus my humor {or perceived lack of} has a certain basis.

Greg Stamer would probably be a good source since , I believe he is the one that introduced Greenland to the Western Red Cedar Paddle. {but then…I could be wrong}

Your observation about the timing is interesting, Roy, though I’m pretty sure it’s off by a few years. As best I can recall, when I first started using GPs, there wasn’t anyone making them in carbon fiber. I’m pretty sure that Superior was the first company to do so, at least commercially. I certainly wasn’t in at the beginning of the GP “movement” (for lack of a better term). Guys like Greg had been at it for quite a while before I started. Given that, I would guess that WRC paddles probably predate carbon fiber versions by somewhere around a decade in the US, perhaps more. It’s not something that is likely to be documented anywhere, nor is it particularly important, for that matter.

You do beautiful work, by the way.

Thanks bnystrom
My comment about the western red cedar was not about when it was first made, but , using Greenland as the acceptance bar. Prior to the opening of the games to outsiders, the western red cedar paddle was considered too flimsy and weak for a paddle.{by Greenland} It was only accepted as a viable wood after Greg brought one to Greenland and they had a good laugh at it …but then because they no longer did subsistence hunting with harpoon and skin kayak exclusively.

The game changed . So using Western red cedar became except-able. and now is quite the norm for the games {not sure for the walrus put tho} My statement concerned Carbon fiber was also soon introduced, So two new materials were introduced about the same time into a centuries old culture.

We are billion year old carbon, the most common element in all plant tissues. . I want organic carbon in my GL’s so I’ll stick with good old cedar, it’s sacred.

I totally understand Jeff
My making of carbon fiber paddles has been totally misunderstood from day one.I started in order to do what was next to impossible to do with wood .
To make a series of paddles with small changes, to be used before a paddle making class {wood paddles} to not guess at what each paddler wanted, but have them try different sizes and shapes before they made one. Because the use of molds allows repeating and then changing by pulling a plug from the prior mold to slightly change. The changes from mold to mold would be indicative of the characteristic of that change. I made carbon to better understand what needed to be made in wood.

Roy, I get your point now and you’re absolutely correct. Greenlanders are nothing if not pragmatic and they readily adopt or adapt new tech and materials to their needs, whether that’s mast rings as coamings, slices of plastic barrels as ribs or new materials for paddles.

I’m just so happy I found an inexpensive used Greenland paddle, since I love it and it enables me to paddle even when my shoulder isn’t doing great. It happens to be carbon. I would’ve been thrilled with a wood one, too. I am also pragmatic!

Modern Greenlanders have access to home supply stores, with a standard of living the equivalent of Denmark. That said, this wood is often not great, as anyone who leaves HD disappointed knows all to well.
In some ways, Greenlanders of old had better wood. It was driftwood called pingeq, from LOGS (not tiny sticks), that came from Siberia and other far-off places. As time went on, many hunters bought European pine and other woods. H.C. Petersen writes, “Not all kayak builders were able to obtain pineq. Therefore many of them used the paddle wood from the shops. This was reddish and tough but had a course grain and was not completely without knots”.

The first paddle that Greenlander Maligiaq Padilla brought to Delmarva in the '80s was full of knots, fairly heavy, round shaft, very narrow blades (I have it in my collection). He tried a WRC paddle in Delmarva and loved it. He was given a WRC paddle as a gift by one of the participants.

When I participated in the first Greenland games opened to outsiders in 2000, the chief competition judge, Kampe Absalonsen liked the shape of my WRC paddle, but shook his head and said, “not good”. Traditionally, he explained, a paddle should be strong enough to support your weight, for example if you used it like a chin-up bar. He said my paddle was too light. However, even with their reservations, the judges allowed me to use the paddle. It survived the competition and my walrus pull attempts (and for a second trip when I competed again). I left it with Maligiaq and it stayed in the Sisimiut Qajaq clubhouse where it got a lot of use and attention.

I brought it back home on my last visit and used it as my main paddle for many years until I accidentally cracked it during a forward stroke class. I was trying to show that your paddle should not slip through the water, but acts like it is “stuck in mud” in a good stroke, allowing you to lever your kayak and body forward. I demonstrated a strong catch with enough power to bend the shaft and CRACK. I guess I made my point… (the paddle finished the lesson but I retired it) 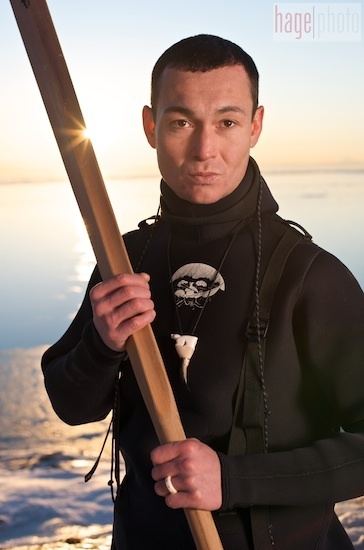