Measuring distance on a river

A planimeter is used to compute area, not distance.
https://en.wikipedia.org/wiki/Planimeter

As mentioned above, the tool to measure distance on a map is an opisometer
https://en.wikipedia.org/wiki/Opisometer

If you’re have downriver racer tendencies, the GPS is going to be the most accurate measure. If you’re a “catch every eddy - surf every wave” kind of paddler, not so much.

yknpdlr nailed it. When using GE, zoom in enough to see where the best route lies, and use plenty of waypoints. Then realize that the riverbed may have changed since the photo was taken. (Nothing’s perfect

When using GE, zoom in enough to see where the best route lies, and use plenty of waypoints. Then realize that the riverbed may have changed since the photo was taken. (Nothing’s perfect

The Yukon in particular changes or adds the location of gravel shoals every year, but the GE coverage is for the most part only a couple of years old and fairly accurate. The biggest problem was changing water level from year to year, so some of the usual shortcuts behind islands or around bends might be either very good or gone.

The available topo maps for either the Canadian or US segments are so old that they are worse than useless for navigation because of major changes in the river channel in the decades since the maps were surveyed… The same is true of available GPS loaded maps. On the 1000 mile race near Circle AK, where we were looking for an island to camp as shown on the GPS, there was nothing but water, the island was gone. In other places as we paddled along, large chunks of earth were falling in the water with the banks of permafrost and dirt being sharply undercut. The fastest current tended to be near those undercuts but we had to be careful of falling earth and ice chunks that made large waves as it struck the water surface. 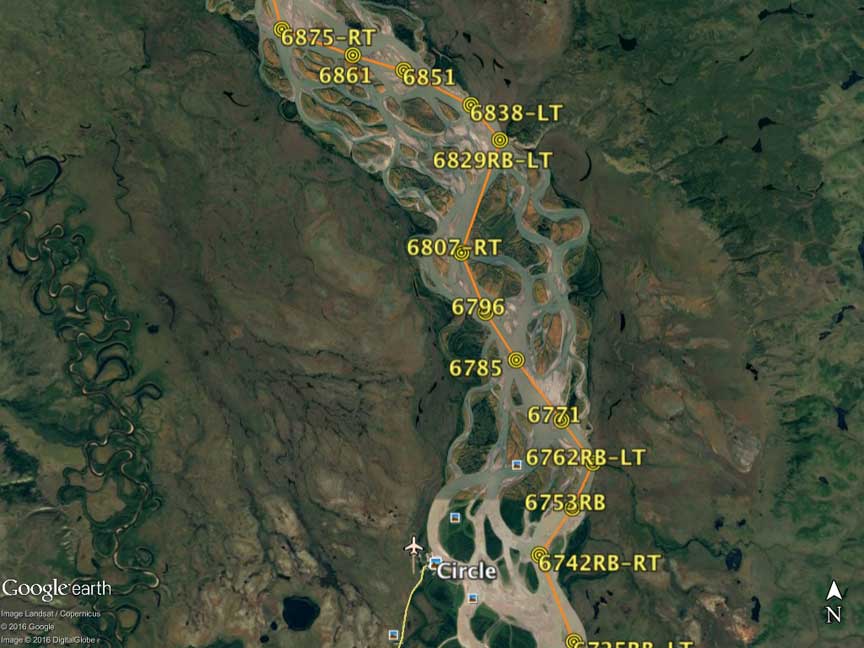 The numbers shown at the waypoints on the route are MS Excel calculated distances (in tenths of a mile) from Whitehorse. The program also determines left or right turns (LT/RT) (left/right bank LB/RB and distinctive point names are manually added) and the whole of the route and waypoint labels get loaded into my GPS.

@dleah said:
What is the best way to measure the distance between two points on a curvy river?

I use the S-health app from Samsung. It’s available on the app store (Android only I think) even if you don’t have a Samsung phone. It has a kayaking module that will track your speed, distance, theoretical calories burned etc. I use the same app to track my daily steps and when biking.

A good guide for distance on a river is to multiply the direct distance by pi (approx 3.14).

“The pleasantest distance between two points is the meander”.
-“Just John” Baumann