It was built by the Mad River Canoe Company of Waitsfield, Vermont in May of 1988 for the 1988 model year. Confluence came up as the builder on the HIN search only because MRC was later acquired by Confluence Holding which didn’t even exist in 1988.

The paddle was designed by Steve Scarborough who later became the chief boat designer for Dagger Canoe. Most people are familiar with Dagger kayaks but Dagger was a canoe company before it ever produced its first kayak. And before that, Dagger was a paddle manufacturer owned by Steve Scarborough. Dagger Canoe got started in 1988 by Joe Pulliam who previously worked at Perception. He approached Steve Scarborough who was making paddles at that time, and together they started Dagger Canoe. Mad River simply added their decal to the paddle. They had nothing to do with making it.

I am pretty sure that the canoe is a Traveler. If so, I have one just like it in the same sand color. I also have a Dagger paddle just like that one that I bought at the same time I bought the boat in Jacksonville, Florida.

Measure the canoe. If the length overall is about 16’ 2" and the gunwale width at the molded hull is 26" it is a Traveler. The Courier is much shorter at around 14’ 9" and wider at around 32" and the Courier did not come stock with a center sliding seat.

The Traveler is a large volume solo canoe, good for tripping with a load, but a bit large for day tripping for most people, although it can certainly be used that way. It is a pretty hard tracking hull design. I used to use mine to take one of my daughters out on lakes and easy rivers when they were growing up, trimming the canoe by sliding the center seat all the way back.

Edit: I had not seen your prior post with the measurements. It is definitely a Traveler. MRC measured the gunwale width at the outside edges of the molded hull which did not include the outwales. The maximum beam at the 4" waterline was listed at 29" for the Traveler but that is a bit hard to measure accurately unless you have a big set of calipers.

The Traveler was a modified version of the Jim Henry designed “Screamer” which was designed to be a downriver racing boat. The first photo on this page from the Hemlock Canoe website shows Jim Henry racing a Screamer in 1973: PHOTO ALBUM Canoe History

@kholman I couldn’t help but notice your profile photo, which seems like an unusual canoe for this forum and a bit familiar to me. Is that perhaps the view on a US nuclear submarine of the watertight door between the engine room and auxiliary machinery room 2 from the AMR2 side?

It must be the way the light is hitting it. I haven’t found any impressions yet.

Thanks again for the info!

@pblanc THANK YOU for all that awesome detail. It feels good knowing what I have.

Are you still in Jax? I just moved to NM from St. Augustine 5 years ago and did a lot of kayak fishing in the Intercoastal there.

No, I never lived in Jacksonville although I have an aunt and cousin who still live there. I actually drove from Tennessee to Jacksonville to buy the boat. At that time MRC had discontinued production of the Traveler. I thought it would be a good choice to take my young daughter out in and it turned out to be. But I had to call Mad River to find out which retailers might still have one in their existing stock and found a shop in Jacksonville that did. 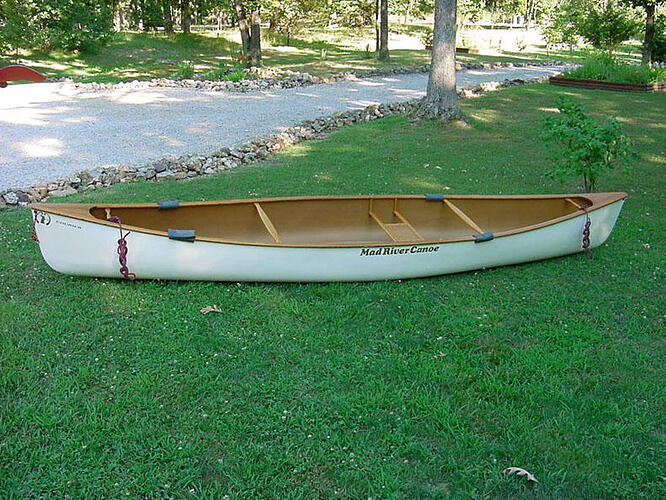 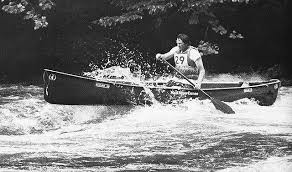 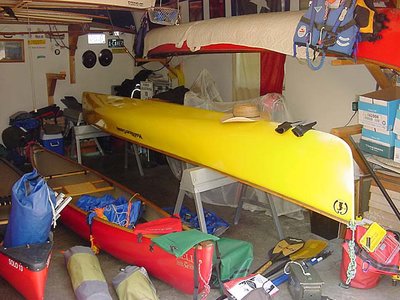 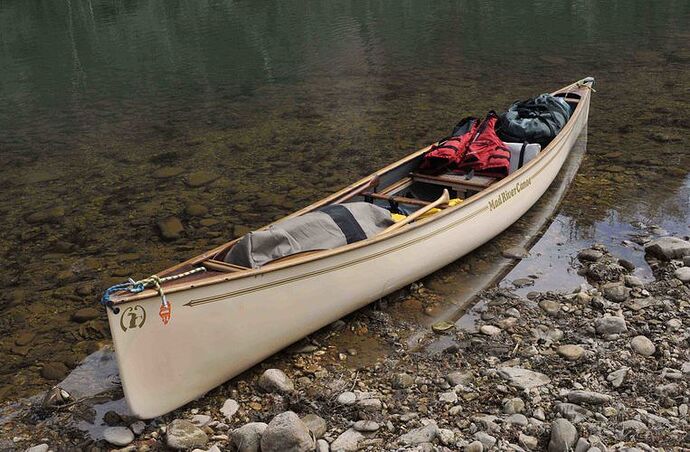 I’m with pblanc; I think it’s a Traveler.

Thanks for the pics. Love that last one, looks exactly like mine!

I suspect that is the kevlar “Independence” model. The Independence was the longer/larger version of the “Courier” for bigger paddlers. I saw one of the “Traveler” models once…it was totally flat bottomed, with no lift at either end and a square cross section, and vertical ends, while the Independence has rounded bottom edges, curve to the keel ends, and a bit (1 to 1 1/2 inches?) of rocker to each end from the thwarts out. I’ve got one of the kevlar Independence models in my garage, purchased years ago from the dealer in Bloomington, IN. The “Traveler” was already out of production when I got my Independence in the early/mid 80s. I note that it looks like a lot of the screws are gone from the gunwales in yours…so you will be looking for stainless steel phillips head screws to replace those (I had to get the local hardware store to order those for me once…they didn’t stock them). Not sure about the cord loops sticking up from the end plates…have not seen that before. The Independence was intended as a ‘tripping’ model when it was sold. I used to surprise others on local trips where I only had a day pack and lunch, by being able to get through shallow spots on the rivers that the tandem boats could not pass through since they drew more water. I did learn to plan a bit ahead for maneuvering, and to do more steering strokes than on my shorter solo canoes (Bell Wildfire, Mad River Guide, etc.). The Independence also doesn’t really like to lean to turn like some of the others mentioned…so more turning strokes seemed to be needed. Good luck with it!

If the length measurement is accurate, I think it is too long to be an Independence. They were only 15’8", while the Traveler was 16’2".

The neighbor I bought it from was taking the screws out when I walked over to his place last Saturday. I have them all in a bag and they’re in remarkably good condition considering the age.
Thanks again

If its 16 2, then its probably not an Independence…as others have said the Independence is 15 8 or so (or at least mine is…unless there were running changes to the Independence model I’m not familiar with). Since the gunwales are off, consider putting Watco or similar on the inside (hidden) edges of those pieces before they go back together. Most of us likely do not take the time to separate the gunwale pieces to do that, and since they are partially apart, its a good time to do it.

The Traveler has a shallow V bottom hull as do many of the Mad River designs, especially those from Jim Henry. It does have nearly plumb stems and minimal rocker. There is a moderate amount of tumblehome at center.

The loops on the deck plates shown in the photo are not stock and are probably shock cords intended to hold looped painters.

Having been descended from a downriver racing canoe the Traveler shares the features of all such canoes which are intended to simply get downriver as quickly as possible with a minimum of maneuvering. It is deep (although not quite as deep as the Screamer) and hard tracking. Maneuvering the boat on a fast flowing river requires one to anticipate maneuvers as far in advance as possible and generally involve side slips and back ferries where necessary. An actual turn can be facilitated by heeling the canoe to the off-side onto the flat of the V bottom hull and employing a series of bow draws and stern pries. The boat is pretty stable and can actually be heeled over pretty comfortably by a kneeling paddler.

You can find a number of threads discussing the idiosyncrasies of the Mad River Traveler by using the search function on this forum. Here is one in which Charlie Wilson weighs in on the Screamer, which essentially handles identically to the Traveler:

Thank you for the info! I really appreciate it.

I don’t think we have to worry about me doing any whitewater around here. I know it might not be the best canoe for a small calm lake, but it will be enough for my plans!

I just sold our MR 1981, one of the older Royalex Explorer 16. I don’t recognize this but I agree it must be Kevlar. Ours turned out beautifully and I just sold it to a guy from Atlanta. We have a folder full of our photos, but it does not upload easy to messenger. If you want to send me an email address, I will try to send it that way if you are interested. But like I said, ours is a MR Explorer 16 made of Royalex. I hated to get rid of it but my husband and I are in our 70’s and we wanted to get something lighter–like kayaks. Soos

You know it is Kevlar for two reasons. One is the color of the interior of the hull. Second Mad River appended a “-K” to the end of the 12 character HIN on their Kevlar hulls.

With its length/width ratio of 6.7 and its hard tracking the Traveler is a fairly efficient flat water hull and its 16+ foot length gives it a high maximum theoretical hull speed for a solo canoe.

The downsides are that with its size and V bottom it also has a lot of wetted surface area so more skin friction. So paddling it up to a fast cruising speed will take some effort. And due to its length, depth and plumb stems there is a lot of hull to catch the wind.

Thanks again for all the info @pblanc . Great stuff!

I can’t wait for the ice to thaw now.

This is a picture of the late taken by a neighbor about a week ago. 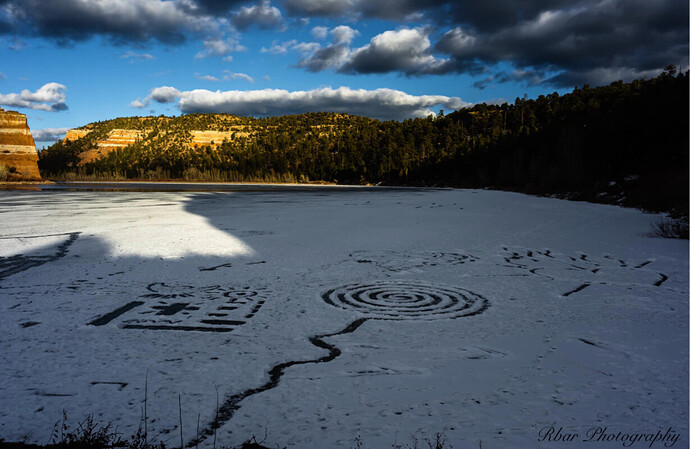 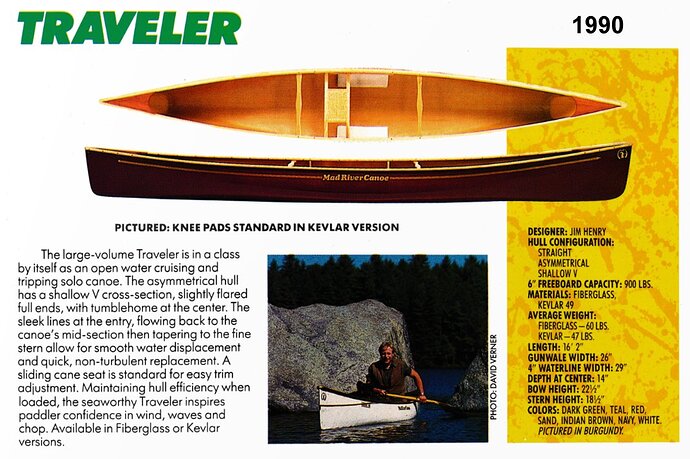