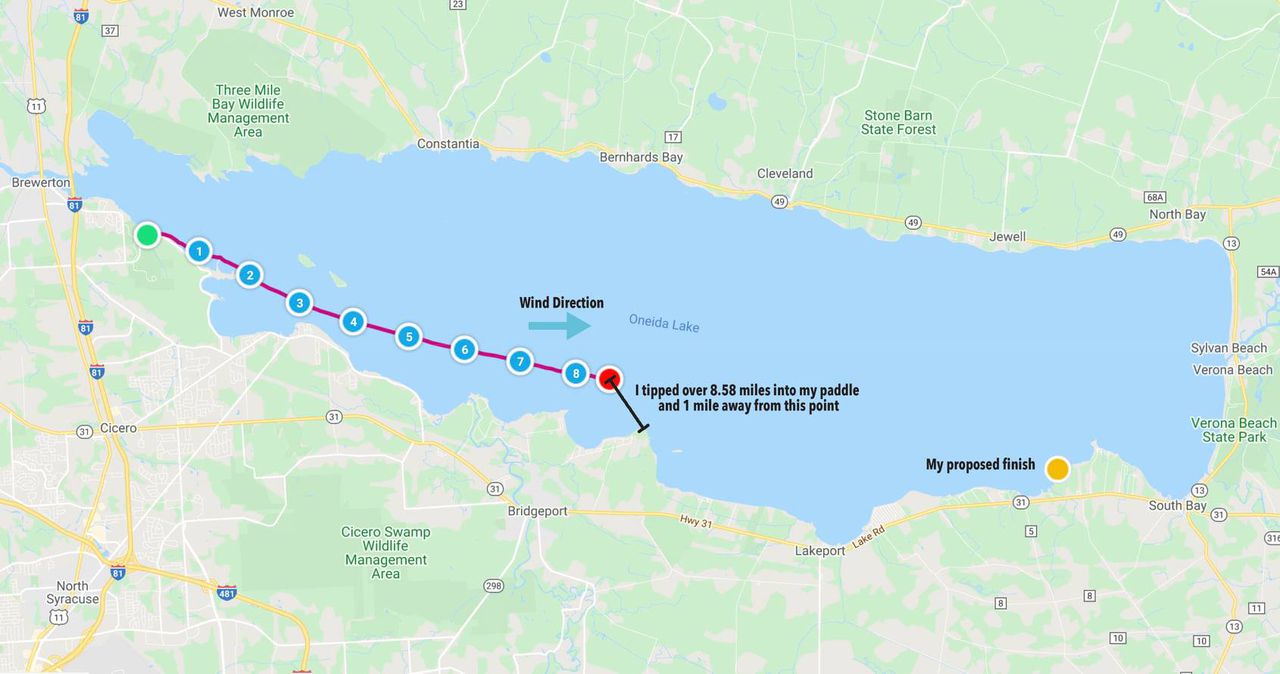 How even an experienced kayaker can get into trouble in the cold waters of...

Bob Raymonda, 62, ended up spending 90 minutes in the water and was almost too cold to speak when two boaters pulled him out of the water.

Amen to the opportunity to educate and reminder to those of us that know… He isn’t sharing his story looking “for sympathy” but to share the experience and promote safety. I applaud him for putting it out there.

I’m on that waterway not far from his route just about every day it isn’t frozen, it’s easy to overlook something when you are “just going out for a bit.” Further complicated when “just a bit” is 16 miles….

The part about not wanting to drop the cell phone is exactly the kind of irrational thing that will happen to your brain when you become hypothermic, focusing on a mundane rationale rather then using something that could save your life. I’m sure he is aware at this point that he should’ve used it. It’s easy to look at that bit from an armchair and say “what was he thinking” but he was likely suffering from hypothermia moments after entering the water. It happens very quickly

An alert beacon that his wife would no doubt have been monitoring or been a recipient for messages from can be pre programmed with messages could have been easily activated. A wrist worn device that connects to your phone may have helped him decide to call someone. There are submersible ones available

Better yet… A VHF radio is very helpful on this waterway(Erie canal system) and I carry one having used it multiple times to communicate with boats and lock attendants. The canal system monitors channel 13 and I have always had someone respond within moments. He wasn’t close to a lock but it’s a clear shot behind his route to the brewerton lock plus they have employees out on boats tending to waterway repairs, buoy placements etc…… Certainly would have been private boats in his vicinity monitoring though…

So 2 more posts to insult and criticize the man further.

I have heard beginners say they don’t want to ask questions for exactly this reason.

Asking a question is totally different than knowing something and disregarding safety. He was not a beginner he was an experienced kayaker. He’s a danger to beginners by example.

Raymonda has more than 30 years of experience

Beginner? Didn’t know cold water can kill you? Many safety items and rules were ignored.

The subject has fairly openly admitted his lapse in judgment, ego and hubris. I feel some sympathy and for someone who might have been floating there thinking he might never see loved ones again because of the stupid mistakes he made. Lapse in judgment is nearly a universal human trait, much like I wished compassion was.

I also feel some sympathy for those who repeatedly engage in name calling and continued ridicule of someone who publicly admits their mistakes. Such people obviously have insecurities and self esteem issues for which they must overcompensate. I feel bad they are compelled to act out in such a way.

Lapse in judgment is nearly a universal human trait, much like I wished compassion was.

I feel this deserves repeating.

I’m glad PD pointed out the potentially misleading statement in the article “without his wetsuit he had to keep moving to try to stay warm”. Movement just accelerates your heat loss. There’s a cold water survival body position called HELP (Heat Escape Lessening Posture) where you pull your knees to your chest and try to turn into a sphere to minimize heat loss while you hold still (unless you think you can swim to shore within a few minutes).

I agree it’s good that he took some responsibility for his own mistakes. He’s lucky to be alive; seems like it usually takes only 2 mistakes to kill someone. In this case it looks like a long list of mistakes; not prepared for weather change, not dressed for water temp, wrong boat for conditions, overconfident in abilities, moving to try to stay warm, offshore yet unable to self-rescue, not carrying a whistle, not calling for help, etc).

For the rest of us:

Glad he survived.
Glad he shared - as it might help others
Glad there’s somewhere everyone can go to learn - nasty criticisms really don’t help much. Mute this post and spend some time reading here instead:
National Center for Cold Water Safety
(Thanks Moulton)
And maybe donate, as it may help others learn too…
(Not affiliated. Just think it’s a worthy cause)

What I think would be most helpful to beginners (like me) is a solid list of the mistakes made and where not obvious, how to prevent said mistake. I read the article and can come up with my own list, but a “curated” list by all of you experts with specifics regarding the severity of the error would be helpful.

After all, he did post this in hopes that it would help others. When he posted it I am sure he knew he would be criticized, but he posted it anyway.

Personally I am glad he survived, it would be worse to read about this after his death and any summarization of mistakes made would be mostly supposition, since there were no other witnesses.

A couple of the mistakes were obvious and have been mentioned (not dressing for immersion, not having a whistle or other emergency signal device) but one thing that stands out to me is that he was paddling what I believe was a local lake for him and he didn’t have an understanding of that lake. This is something we all must seek out before paddling in any body of water, even if it appears benign. And we need to look at conditions before every paddle IMO.

ETA as Celia mentioned, he also evidently did not have the skills for that lake. Anytime you are taking on new challenges, doing it solo is extremely unwise.

I know I can’t walk on water so I take all the precautions I can. Same as when I raced my car or raced my offshore boats. Same thing in my business safety was first. You don’t jump in a race car and say I forgot my helmet. You don’t get in a kayak and launch and not feel 55° water temps. Not like I forgot my whistle or phone.

After all, he did post this in hopes that it would help others. When he posted it I am sure he knew he would be criticized, but he posted it anyway.

That is exactly the point. He is did not share with thought of getting approbation for his saga. Quite the contrary. The effort (along with the attendant slings and arrows) is worth something if you or anyone else gains from it.

I like this idea and since I initiated the thread topic, i will give it the rest of today to play out and give others a chance at constructive reply based and the information we’ve been given. I will then try to compile a summary list based on everyones replies.

It’s not clear if he had a paddle float to help him try to reenter, but to me that’s an essential safety item, along with practicing using it. Also, even if he still couldn’t get back in, waving that bright blob on the end of a paddle makes a great signaling device.

He was in a surfski so I doubt he had a paddle float.

Two books to read are Deep Trouble by sea kayaker magazine. Tons of videos on YouTube and numerous other publication’s available.

“He has been a marathon paddler since 2017, racing in the New York Paddlesports Racing Association. He is a 2018 gold medalist in the United States Canoe Association Marathon Nationals. Most recently he completed a 90-mile race where he placed first in his age group.”
Seems like he would be a good guy to meet. It’s a hard-driven person that accomplishes these type of things. Facing his fear of capsizing in his new boat will probably take on a little different meaning now. May he continue to enjoy going after his growing edge. Downwind sure is fun if you enjoy speed and riding waves.

Somwhere in the middle is probably the sweet spot.

This guy was maybe getting caught up in the bravado and he clearly acknowledges it.
Good on him for sharing his lesson and coming away safe and a better man for it.