Recommendations for a good Contact Tow Line? (not a tow belt)

Happens all the time when people rig boats with anodized fittings and SS braided lines in saltwater no matter how the cared for them. Happen on Sea-lect pedal adjustment screws which were aluminum with the SS cable in the center. They have changed the adjustment screw to SS and sent out replacements to anyone who asks.

What are the 3 essential conditions for galvanic corrosion to take place?

electrical continuity between the two metals.

I prefer to use knots that don’t weaken the rope significantly.

I typically use knots simply so I don’t have to source and buy extra stuff! Would a bowline work best in this situation, or is there a better option?

I just made a couple this morning. Cutting the line at 6’ worked well for the width of my boats after tying on the clips. I used Sterling 5mm cordage with clips I’ll link to below. I tied bowline knots on mine because I’m familiar and comfortable with them, but I’m certainly open to options. I’m pleased with the quality of the clips thus far: https://smile.amazon.com/gp/product/B08L7Q6MSG/ref=ppx_yo_dt_b_asin_title_o05_s00?ie=UTF8&psc=1

Bowline is a good knot but a figure eight weakens the rope a bit less and is therefore preferred by most climbers and abseilers over the bowline these days.

It is important to understand that anything that places a tight bend in a rope whether it is running it through a thin carabiner or crimping it to itself with hardware will weaken the rope just through the effect of the tight bend. When a rope is forced to conform to a bend with a diameter of less than four times the diameter of the rope itself, its breaking strength is reduced.

Would a bowline work best in this situation, or is there a better option?

This pic shows the type of knot I use when tying on a carabiner. This isn’t the contact tow I carry on deck, but I use the same knot on those. One thing that’s very important is that the 'biner can’t flip around on the end of the rope, which is why I don’t recommend a bowline. 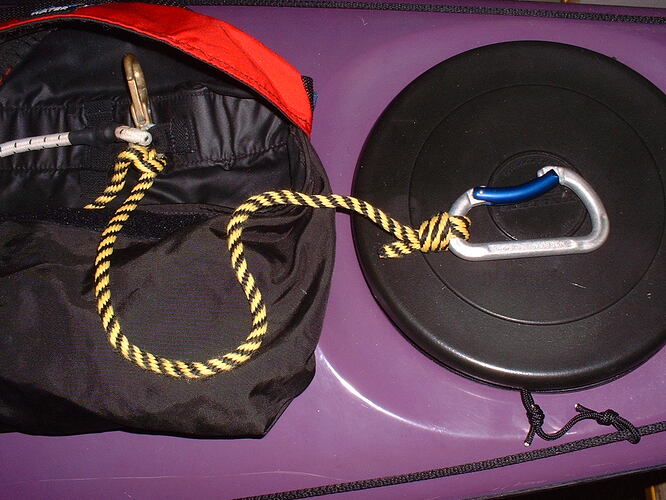 On my waist tow, I take it one step further and use a quick-draw, which holds the 'biner very securely and also functions as a handle. It works great, but it’s perhaps a bit bulky for a contact tow, so I don’t use it for that. 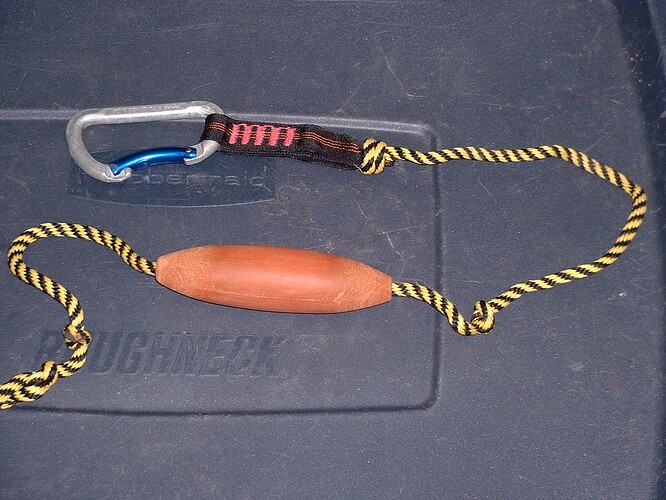 Here are a couple of pics of my seriously used and abused contact tow, which has been deployed many times in training and a few in actual emergency situations. It’s made up of 5mm cord and two keylock carabiners and is attached to the cord and sliders on my foredeck. I show it expanded in the first pic, but if I need the space I’ll stack the 'biners as in the second pic.

With this simple rig, I can grab either 'biner, with either hand, and clip a boat on either side, very quickly, with one hand, even with winter gloves on. I don’t need to reach across the foredeck to unclip the 'biner or to clip to the towed boat, nor do I need to swap the carabiner between hands. The coiled cord keeps it tidy on the deck, but extends as soon as you pull on either 'biner. The max length is 38", which works well for me and my boat. I have long arms (35" sleeve) and the boat has an ocean cockpit, so you may want to adjust the length to suit your body and cockpit dimensions (for reference, the decklines on my boat start 25" from the backband). 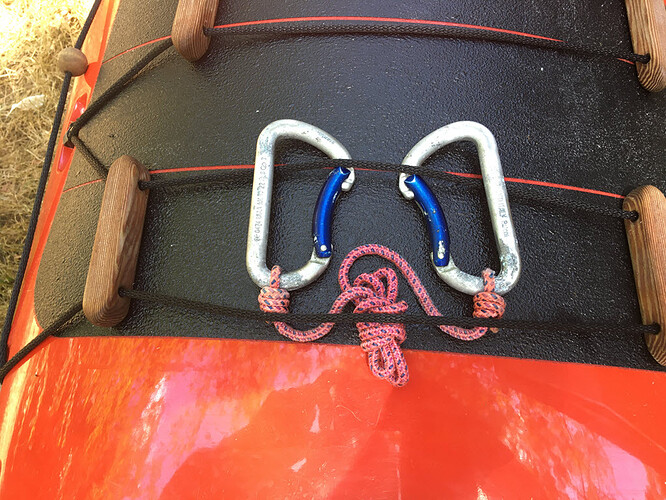 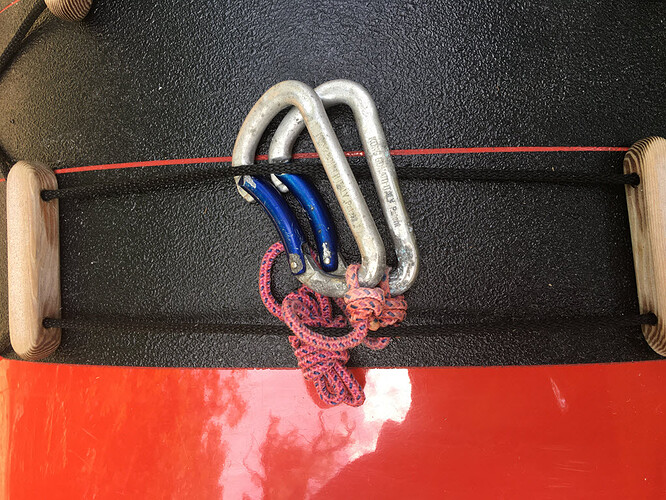 **NOTE:**The corrosion you see is because this rig sat in a closed plastic storage tub wet for a couple of years. Normally, if you rinse it and allow it to dry, this doesn’t happen (see my previous pics). Both 'biners function like new, they just look like crap.

Notice also that the anodized gates did not corrode except where the anodizing was scraped off. If you can find fully anodized climbing 'biners (not dollar store junk), you should have no corrosion problems as long and you rinse and dry them.

Wow! Thanks for this detailed explanation!

These are very helpful images and great guidance. Thank you! I’ll be making one of these later this week!

By the time knots fail deck fittings would be ripped out of your kayak. 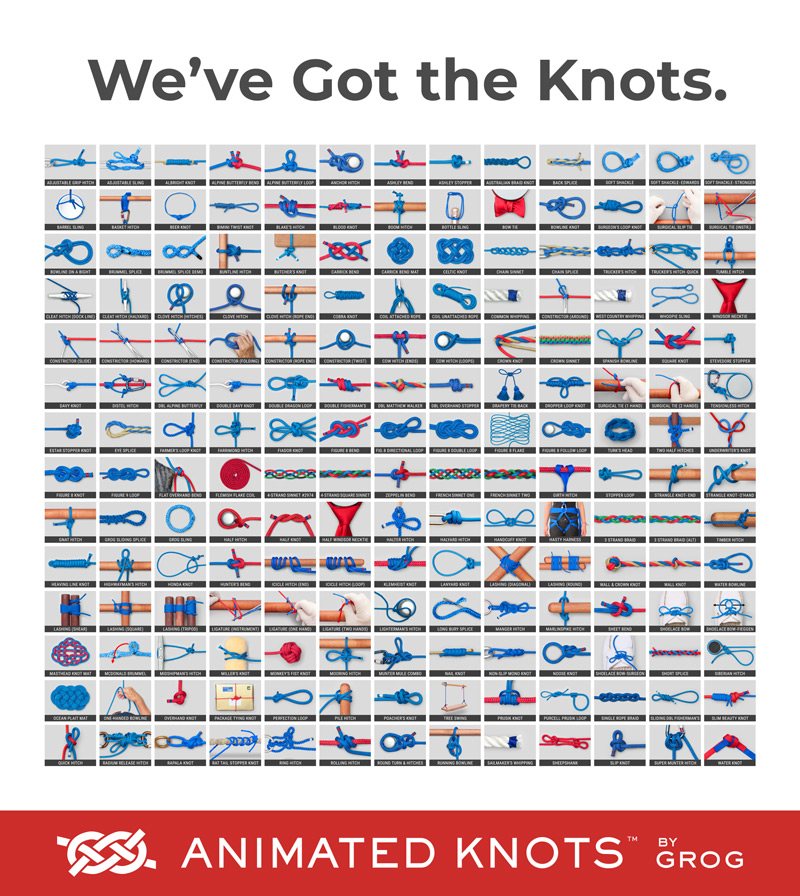 Animated Knots is the world's leading site for learning how to tie knots of any kind. From Boating Knots, Fishing Knots and Climbing Knots to how to tie a Tie, or even Surgical Knots — we’ve got it covered.

By the time knots fail deck fittings would be ripped out of your kayak.

Good point! Thanks for the chart!

The knot I use for attaching carabiners is a “scaffold knot” (Learn How to Tie a Scaffold Knot | CMC PRO), which is the same at the “poacher’s knot” on animatedknots.com, except it has three wraps instead of two. Frankly, I had no idea what it was called, I just tied them.

I love knots to bad I need to brush up on them at times when I use them. If you learn 5-6 you have most things covered. Years ago before Internet in early 80’s I bought a great book of knots well illustrated.

Thank you for the pictures and idea, Brian. I made a contact tow over the winter and have been doing rescue practice in the pool and realized that having the line looped across the deck from left to right can be untidy and can interfere with stashing a paddle during a rescue (at least the way my boat’s lines are configured). I like your idea of keeping everything bundled in the middle, in front of you.

I looked at the Whetman, which is really very tidy and compact but it’s a unitasker, isn’t it?
The quick release is cool but you’re not going to use that as a stirrup or anything other than a tow line in a pinch, and do you really need quick release when the other boat is right next to you. Thanks again, very helpful to see what other people do.

I’m glad that you found my system helpful. As for the Whetman, it looks to be carefully thought out and well-made, but the way I see it, if you need a nine-minute video to explain how to use a contact tow, it’s too complicated. Heck, I can make a contact tow in less time than that!