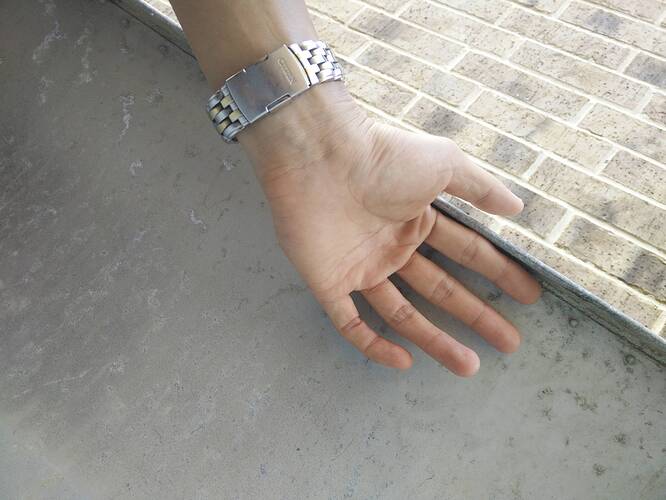 I put my finger to approximately where I am putting the oarlock sockets.

You can see the outside and inside photos.

Yes, there is a gunwale protrusion towards outside, maybe about half the thickness of my index finger.

The gunwale protrusion towards inside is deep enough for my entire index finger.

Flat surface width at that gunwale location is 26 mm.

Gunwale protrusion towards outside is about 5mm and about 21-22mm towards inside.

Okay, so that protrusion will be in the way. With a side-mount socket, it will almost certainly interfere with the oarlock pin dropping down fully into place, and for an angle mount, it will prevent a flush fit of the side portion (vertical surface) of the mount. I think if you got a strip of aluminum or brass of the proper thickness, and placed that along the side of the gunwale below that protrusion, you could use either type of oarlock socket mentioned above, though surely the angle-mount socket would be better. The strip of metal would need to have a thickness that is pretty close to matching the amount of protrusion of the top plate of the gunwale. I’ve seen strips of aluminum of various thicknesses available at most good hardware stores. The width of the strip could be anything that’s as wide or wider than the “height” of the horizontal mounting surface of the oarlock socket. Drill that spacer plate so your mounting bolts go through both the gunwale and that plate. This will beef-up the location of the oarlocks, besides just making the oarlock sockets fit the boat better.

I am going with either Sawyer Utility or Smoker Utility. Talked to Aaron at Sawyer over the phone and he recommended those two.

I have never seen oarlock sockets in person, so I would do exactly what you recommended (even though at this stage I don’t fully understand everything).

I read your advice several times, looked at socket photos and measured again. Now I under 95% of it. It does sound like angled Mount would be better. I will google angled mount photos and look at them more. It is easy yo return to West Marine, so no worries, even if I need to go there a few more times.

Is the one-piece 8’ Small Stealth a lot better than Sawyer Utility 7.5’?

Cost difference is only $40 between the two pairs.

Aaron say the Small Stealth should be slightly lighter and tougher, though it may not matter for my casual use.

I don’t really know the answer to that. I haven’t used an oar like that. From a physics standpoint, it does make some sense that a shorter blade will be more efficient. If the blade does not move much through the water during a full power stroke, opposite ends of a long blade will be “fighting each other” as the blade pivots (changes angle) during the stroke. However, I this “fighting action” is does not take place as long as that movement is less than the amount that the blade moves through the water, which is probably the case (all parts of the blade are pushing through the water in the same direction if strong effort is applied to the stroke, though the outer end of the blade will move farther in this case). I use traditional wood oars with long blades, and I am happy with them. That’s as much as I know, beyond this theoretical aspect. I DO see that the oar shaft some distance inboard of the blade slices forward through the water during the course of the stroke, especially if the blade is planted deeper than necessary. That’s an illustration of that pivoting process in action.

Thank you. I will go with Sawyer, because they have a good sale going on.

I measured my canoe again. My oarlock distance will be about 34". Depth from oarlock to canoe bottom is around 12". I am 5’9" and seat will be 3.5" or higher than canoe floor.

PS:
The widest point of my canoe is supposed to be 36". But that width is likely distance from left side to right side, and not the center left gunwale to center right gunwale distance (which is 34").

I think either oar length would work fine, but the 7-footer will probably be a bit easier to get used to. I think that’s the one I’d recommend in your case, but not adamantly.

Thank you very much.

I read your advice word by word again and drew some diagrams with all the numbers.

I tried it out empty handed (virtually, without oar) and think I can get used to 7.5’ oar. Overlap is only about 10" or two fists, without angle. When we row, there will be an angle, so actual overlap is likely quite easy to get used to.

So if the ongoing sale works and my budget allows, I will get the 7.5’ Small Stealth (SST). I am guessing that “small” correlates to smaller/narrower boat and more efficient oar, which should better benefit a dummy beginner like me

Sorry, I kind of change my mind. I want to try DIY first. I can probably DIY a strong 8’ easily, using halves of my 8’ kayak paddles and some strong adapter sleeves. Can always buy oars later on.

I also added a DIY extender idea using Home Depot regular duty aluminum closet rods in the thread at the other forum. The stiffness, flexing and breakage resistance tested just fine for my casual use. I will simply use lots tube overlap and skip sleeve adapter, which I did not feel as necessary after my test.