Seeking advice on repairing end of a wooden paddle

In a move, the plastic/resin ends of my paddles were damaged (see the attached photo). The wood is still intact, but I’m not sure how to go about repairing this. It almost seems as though I would have to make a mold and fill it with epoxy, but maybe there’s a better way? Any suggestions would be much appreciated 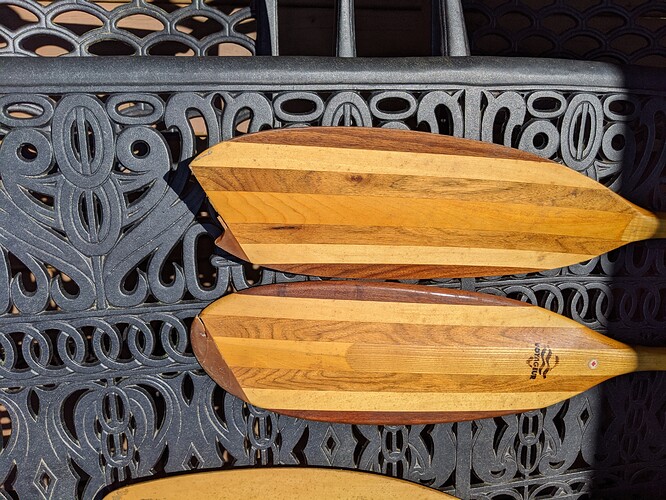 It looks like you’ve lost about half of the tenon on the top blade, which complicates matters. You’re either going to have to drill and peg the new tip or slot the blade and install a floating tenon. It would be easier to make hardwood tips than to try to mold epoxy. Just for the heck of it, contact Voyageur and see what they have to say. You’ve got nothing to lose.

That would be a problem since Voyageur, the paddle makers, ceased to exist when Mad River bought them out and then changed hands themselves and the new owner evidently dropped the line. I had one of their kayak paddles for about 5 years, recently sold it. There was a discussion about Voyageur wooden canoe paddles like yours on here a bit over 5 years ago:

I’ve recently received a couple of fairly nice paddles which have a branding that I am unfamiliar with and I was wondering if anyone else has seen these. The dolphin over waves over the word Voyageur image is the only logo on the paddle. It appears to be branded into the wood. https://flic.kr/p/s6RpmT https://flic.kr/p/s4YEeV I know Sawyer and Grey Owl have Voyageur models. The paddles doesn’t look a thing like the Sawyer. They look a little like the Grey Owl Voyageur pics I’v…

Yes I saw that discussion too. My first thought was to contact them as well, but that’s a dead end…

Thanks for the suggestions! I don’t have an extensive home shop so I don’t know how much I’m going to be able to do. At this point, I’m thinking that a new paddle is the way to go.

If you do a Google search you should be able to find some guidance. I think you should fix it since it’s not hard and you have nothing to lose. You can get a new paddle too. You do need to make a mold and fill it with epoxy. Buy some kids modeling clay. Stick the ends in and make impressions. Cut a small slot in the end of the paddle blade with any saw to help give the epoxy something to grip. Fill mold with epoxy and stick blade in vertically and then sand it back down to shape it. If you use fast setting epoxy you can just hold the mold on the blade tip. I have a bunch of canoe paddles that I damaged/broke on rocks and they were repaired to better than new with stronger/tougher edges.

Wood paddles get dinged no matter how careful you are and soft woods like pine and WRC are really bad for getting beat up. A friend asked me about some clear tape made for protecting the edges of helicopter blades; I have never heard of it. I typically use epoxy. Any other suggestions?

I would cut the plastic off. Cut a new piece of wood. Glue it on. Sand it to shape. Cover with epoxy and cloth. And place a reinforcing line around the tips.

Of course you could just use water proof glue, cut to shape, sand down the thickness and varnish. Big box stores have hardwood in thin ie 1/4" pieces. Which is about the thickness of the paddle blades.

So I got in touch with Grey Owl paddles. It turns out that they manufactured the paddle for Voyageur in the past. They have paddles of the same shape so they are able to do the repair for a reasonable fee using their molds. Shipping will actually cost much more than the repair!

Thanks for all of your advice!