Skeg vs learning to paddle

When I’m traveling downwind, the skeg on my Prana is fully down. 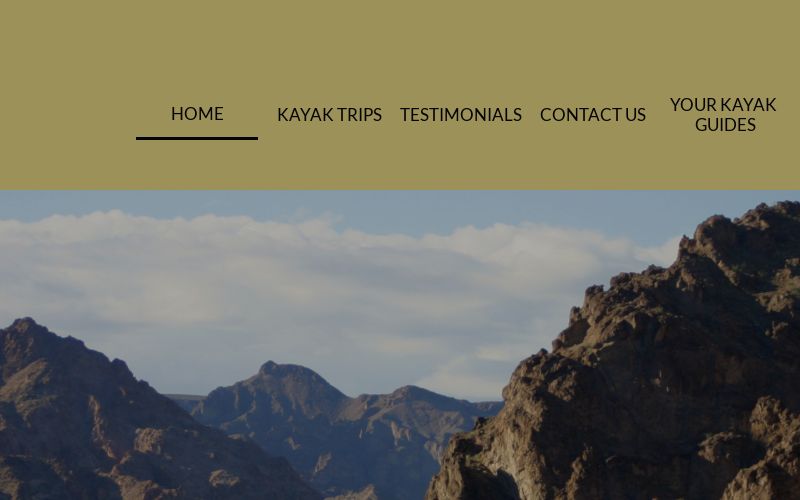 Kayak Skills: Kayak Skeg: Principles and Techniques of Use

Kayak Lake Mead's article on kayak skeg, principles and techniques of use.

Interesting figure, and yes, I agree that rudders cause drag and a power penalty, which these simulation results show.

By the way, these results are based on a mean velocity of 5 meters/second = 11.2 mph = 9.7 knots! That is a very high speed and does not represent anything like normal paddling. Half this speed would still be fast, and the forces and power values will go down. Force is mostly proportional to velocity squared, power to velocity cubed, so they would be about 1/4 and 1/8 of the values above, respectively.

The only time I have seen a rudder give measurable drag is when it is cavitating, either vertically or horizontally. A well built, well installed, and maintained rudder might have a minuscule amount of drag, but it would be more than offset by not having to mend your direction.

There is a reason that the only racers who don’t use rudders are those excluded by rules.

@bnystrom: I only have one reference to skegs and wind direction. A friend bought a first gen Necky Elaho. No one could make it go into the wind, so she took it back. The factory sent her another one that had a skeg and it could go into the wind with the skeg deployed.

Much of the thesis is based on rudders that are a hydrofoil shape or have a pivot rod. Skegs may be shaped as a hydrofoil and the rudders that are incorporated into the hull, as are many rudders on surf skis may be also, but the vast majority of sea kayaks have flat rudders that are nearly two dimensional when comparing thickness to the top to bottom and front to back dimensions when deployed. The thesis also spends a lot of time on when the rudder deviates from 0°. The paper also notes that the ideal rudder would have thickness approaching zero. Pitching, rolling, and yawing are also discussed which were not part of the original discussion.

I still contend that a the drag of a typical deployed kayak rudder is negligible when paddling straight in calm water at typical speeds and is not worth considering.

So does constant chain of corrective strokes.

Yes, if you put too much angle. But the form drag from the neutral rudder is negligible.

This is a little like the question what is a better pick up truck Ford or Chevy? Neither camp changes their mind and then there’s the other distractions from Dodge and Toyota.

If you want a rudder or skeg get one. If not then don’t.

I guess there’s a different discussion for shallow water, crossing sandbars and rocks or traving through seaweed.

Most popular topic on kayaks, rudder vs. skeg vs. neither.

I mounted a rudder in the front to compliment the skeg in the rear. When I don’t want either, I simply paddle upside down.

I have to ask how does a kayak sailing rig play into all this discussion. Forget the sail learn to paddle? Should you use just the paddle to steer or a rudder to hold your course? What about amas and leeboards? Are they all an unnecessary add on? Do they up your overall kayaking experience? As a good friend would say about this “Whatever blows your skirt up.” I miss him and his philosophical wit.

There are situations where a rudder is extremely helpful such as exploring a creek that became more narrow than the length of the kayak and coming across an series of obstructions. The decision was made to turn back. Easy for a 10 foot roto. I had to back down to a wider spot in the creek and back into it in order to turn around. Not typical sea kayak duty but it’s what I brought and it was a beautiful creek to explore.

In all these cases, a kick-up rudder is superior to a skeg for absent minded paddlers (i.e. me), and a smooth bottom is superior to either. I have a small personal animosity to skegs, as I lost a race by 7 seconds in quartering wind and waves after my skeg jammed from gravel at the beach launch.

Snorkels are for those who cannot be bothered to learn the partial roll and balance brace for breathing while upside down.

I’m not sure I’d want to make concrete observations about someone’s wanting to use a skeg or not. I just recognize that there are different skill levels in this sport. Some want to progress, some are just content to stay at a certain level. My first boat was a Foster Legend without a skeg, so that’s how I learned. Now I’m in a Bach Eto. It has a skeg but I’ve not used it yet, though wouldn’t hesitate if I thought it would make my life easier. No, it’s not a substitute for certain skills, but I won’t chastise anyone for wanting one and wanting to use it.

It brings the shallow water issue into play, but it’s innovative.

Here’s how we deal with shallow water: 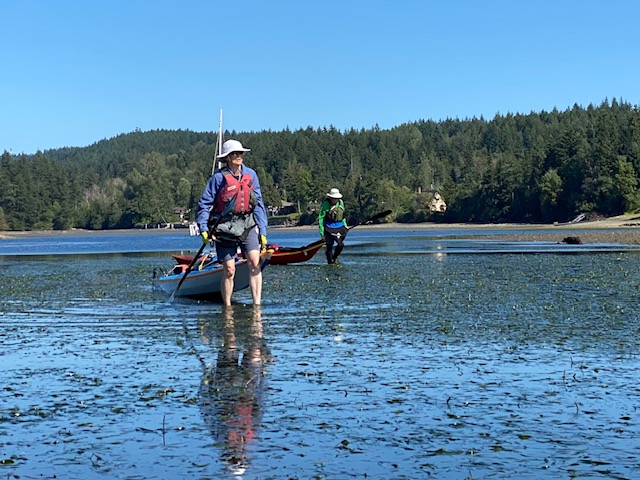 Oh my, l have that boat in my basement. First year Elaho. I really have to find a good home for it because it is in great shape, always lived inside.

It was Jim’s 1st sea kayak. Suffice to say after living with it for a couple of years there was very little he could not paddle straight.

But letting that boat leave a dealer’s floor w/o a skeg is absolutely insane. It barely paddles straight in messy stuff with the skeg

Like Willowleaf, I have noticed that low volume yaks track more easily with my 140 lbs than higher volume ones. Example: The Dagger Status 14 Small and the Dagger Stratus 14 Large are the same length and of similar design, with considerable rocker for manuverability during rock-gardening and surfing, but have beams of 23 and 24.5 inches, respectively. In moderate flat water conditions, I have no trouble keeping the Small on track (and no trouble turning it) but the Large is squirrely and if I pause my paddling for just two seconds, it may vere off course. Lesson learned: The “fit” of a kayak is about more than just the size and configuration of the cockpit.

I only have one reference to skegs and wind direction. A friend bought a first gen Necky Elaho. No one could make it go into the wind, so she took it back. The factory sent her another one that had a skeg and it could go into the wind with the skeg deployed.

Was that the boat that had the ridiculous skeg that stuck straight out the back when it was raised? If so, there were a lot of things wrong with that design. A former girlfriend had one and it was a pain in many ways.

Regardless, the dynamics of a skeg are simple, it helps the stern resist the influence of the wind when deployed (holding the stern in place) and allows it to move when it’s raised. That is what it’s designed to do.

That said, keep in mind that the skeg functions by acting on the water, not the air. In situations where the water and wind are moving in opposite directions - for example, a current opposing the wind - the water has a greater influence on on the attitude of the boat, since it’s nearly 800 times denser than air. Perhaps that’s what you saw; it’s the most logical explanation.