Solo canoes that are designed to be used with a double-blade paddle are a good adaptation but I’m more inclined to want to stay with a single blade canoe paddle. I owned a decked canoe and it was fun to occasionally paddle with a double blade but I found I could easily keep up with sea kayaks using a bent shaft canoe paddle. Even open solo canoes of a comparable length to a kayak seem to be able to keep up with them without killing yourself. And there’s no contest when paddling a solo canoe with kayakers in shorter boats.

While the lower seating position of pack canoes may add stability and increased speed using a double-blade paddle, the design doesn’t have the inherent versatility (paddling positions and technique) of a canoe with a raised seat. Pack canoes have their place, certainly, but there’s something satisfying about paddling a more traditional solo using a bent shaft paddle to quickly get to a secluded bay and then taking out the straight shaft paddle and leisurely exploring nooks and crannies along the shoreline.

Thats why I have 12 boats and some three dozen paddles all designed for different things.

Solo canoe and bent shaft calls for a high cadence stroke. This is sometimes hard in to do in confused seas with cross currents because it calls for predictablity to time the periodic switches… I do enjoy it very much for shorter time periods.

Lets get all the paddling fruit out. There are lots of different boats for different jobs.

I have a Mad River Monarch that will kill your knuckles with a double blade as the coaming is rough. I prefer to single blade it but in reflecting seas when you are trying to make time on Lake Superior and need to have an instant brace on both sides I will pull out the double and watch my knuckles.

All those noosed paddles in the shed have a reason.

I am curious if this new demand is for solo canoes with standard seating or pack canoes?
My oldest solo is one of those 80’s designs that was intended for paddlers intending to be serious about it. But I doubt that anyone today would want to buy it as it tends to eject people who want to sit. I don’t see many people wanting to kneel in a canoe.

kayamedic, the solo canoes I was initially referring to were more traditional designs with angled bench seats. I’ve found that you can kneel or sit and it works well either way. For increased stability in rough water (or for “functional freestyle”) the kneeling position is obviously the best.

DDintruff, interesting. Were they looking for a pack canoe or a more traditional design?

Yep I also prefer open solos. I was just saying that I can see the appeal of the Swift pack boats because they are so light and easy to use. I can stay ahead of many kayaks in my solos but I wouldn’t generalize that solo canoes beat sea kayaks. There used to be a paddling club around here with folks that paddled their kayaks often and even in my Merlin II once the cruise pace reached about 4.5 mph or more the inherent speed of (narrower) kayaks of same length became pretty clear. If your solo canoe stays ahead of sea kayaks I expect that you must be in a race boat or paddling with inexperienced kayakers.

I bought a Northstar Magic which is a 16’ solo in Starlight layup that weighs about 30 lbs. I paddle with a double blade and just leave it on my car so I can paddle anytime I go by the river. It is so light it almost blew off the dock one day while I was getting the rest of my gear out of the car.

All this talk about 20 and 30 pound solo canoes is making me think of visiting the dark side.

Neither would I. My comment was not so much that solo canoes are generally faster than kayaks, but rather, that comparable boats are, well, comparable. A well-designed canoe will paddle very efficiently, as will a well-designed kayak. But to make any meaningful comparisons you have to level the playing field so to speak.

Rookie,
The dark side has it’s enlightening moments. A used, but quality built canoe can keep the cost within reason. For me it’s always been a matter of prioritizing where my money went. For many years the canoes on the top of my car were worth more than the car I was driving. Just for context.

Yes, you have a number of great rivers near you that are far better in a canoe than a kayak. There is nothing wrong with enjoying both. I do.

Careful, you’ll get hooked! I have an ultralight that weighs 18 lbs, and another that weighs 13 lbs. And a kayak that weighs 47 lbs. Guess which ones get wet most often?

Thirteen pounds? How is that even possible?

Angels hair in a cloud matrix.

Not to rub it in or anything but my lightest paddle is six ounces (could be 6 1/2) and four ounce canoe paddles are available.

Pretty canoe. Like the mention of using a double blade paddle.

@TomL Six ounce paddle? Probably made out of pixie dust.

First let me say if you don’t write for a living, you should. I enjoy your posts, especially the one about the launching that didn’t go as planned.

My lightest boat is a Hornbeck pack canoe, carbon/kevlar. I’ve had it 6 years and I don’t know that they still make that exact model; their website has changed, but at the time it was called a New Tricks Blackjack 12.

It has proven to be very durable, and a fun little boat to paddle. A real joy to pop on top of the car at the end of the day. 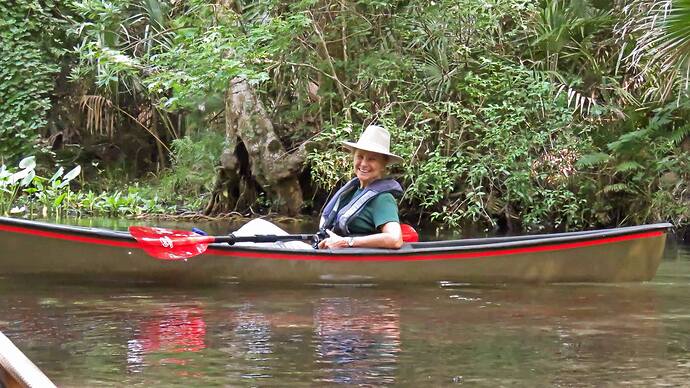 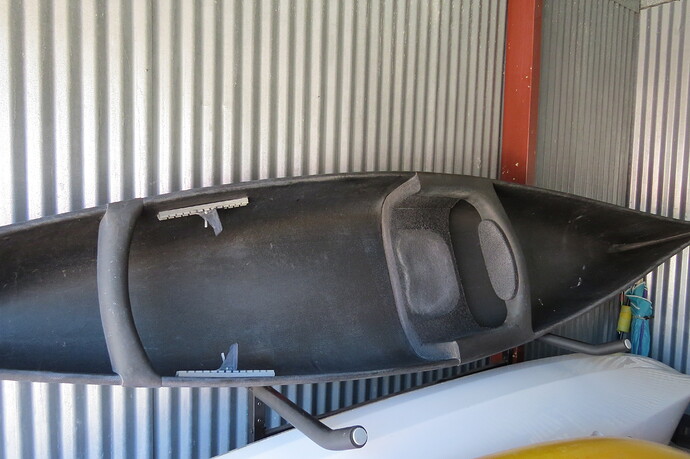 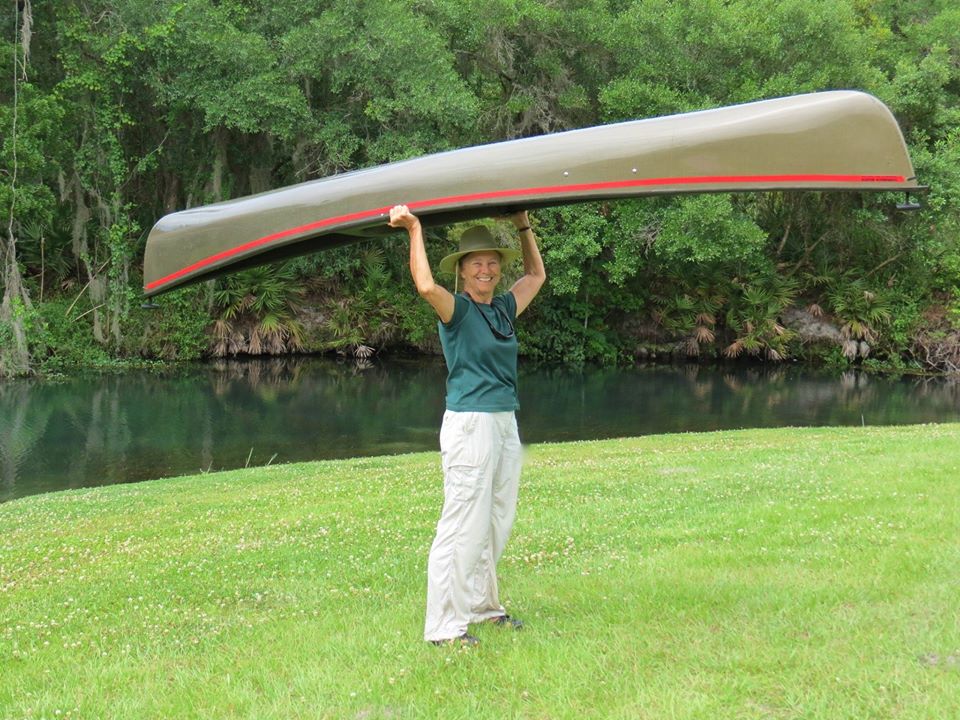 Thanks, Sissy! What a lovely canoe!

At that weight I could carry it down instead of doing another crazed gravity launch.

One of the paddlers in our club has a Hornbeck. Another option is from Slipstream:
http://www.slipstreamwatercraft.com/Slipstream_Watercraft_2/Wee_Lassie_106".html
Another paddler (a kayaker who wanted the option to go on trips requiring portages) has a Slipstream. Both the Hornbeck and the slipstream are a bet to delicate or the way I treat boats. I do lust after canoes in the 28 - 32 lb range though.

This spring I’ve had people asking me about buying solos both at the landings and on the water. Generally it’s tandem paddlers who now find themselves wanting or needing to paddle by themselves. I sold a racing solo already and someone else is maybe interested in my Bell Magic. Realized that I’ve collected way too many solos over the years. Also have a 2nd Sawyer Loon that I might sell. Probably will also sell my Kevlar DY Special although I’ll probably regret it. Lately I usually find myself paddling an ultralight Sawyer Loon or a Mad River Monarch. Also have a Clipper Sea-1 that I might pass along, but will also regret that I’m sure. Sheesh, too many boats to paddle and so little time.

Six ounce paddle? Probably made out of pixie dust.

Could be a LeVas as they can be as light as 6.5 oz. Zone, ZRE and a couple others have ultralight paddles.

We have a number of folks locally with Hornbecks. They are not boats I would want to drag over nasty obstacles or use in a stream where it gets so shallow that there is constant scraping on rocks. Or snapping turtles, whatever that bump was. But they are lovely to have for more sheltered situations where you just want an easy way to get on the water.

Started off canoeing 40 years ago, then received a kayak in 1994 which I’ve been paddling ever since, but for the past 3-4 years I’ve wanted to get back ito a canoe. I don’t like the leaning back position of a 'yak and always used my pfd so I could sit forward…shhhh, don’t tell anyone I wasn’t wearing it. Bought an Esqif Vertige 3 years ago and 3 week ago picked up an Old Town Discovery 119. I, too have noticed a slight uptick in canoers this past year or so. My personal thought about why kayaks became so popular, is that they do not require the balance nor much paddling skills to start with, so anyone can just basically get in one and go.