What was your first canoe/kayak camping trip?

1968 in a john boat with oars rowing 50 miles with my friend Danny and his dog Dixie for 4 nights 5 days. Mom dropped us off at US 301 where it crossed the upper Hillsboro River above the State Park. It was during the Christmas break in high school. Cooked on a Sterno Stove in the boat, or a fire if possible in camp. Went through the city of Tampa then across McKay Bay. The area wasn’t so built up back then, and there was no bridge across McKay Bay. We rowed up Palm River to E. Broadway Ave. It was Christmas Eve night when Danny’s mom picked us up a couple of miles from where we lived. I don’t remember the first canoe camping trip after Carol and I bought our first canoe in 74. They just seem to run together.

Yes, this section just a little more than an hour away.

Those surprise thunderstorms are no joke. Nice to run into someone familiar with the Brazos on this page.

The first time I went on a multi-night canoe trip was when a buddy and I paddled the Hanford Reach of the Columbia River in south-central Washington. For those that aren’t familiar with the Hanford Nuclear Reservation, developed in 1943 as part of the Manhattan Project, here’s what Wikipedia has to say:

“Plutonium manufactured at the site was used in the first nuclear bomb, tested at the Trinity site, and in Fat Man, the atomic bomb that was detonated over Nagasaki, Japan.”

” During the Cold War, the project expanded to include nine nuclear reactors and five large plutonium processing complexes…"

Sounds like a great place to go canoe camping, right? Well, it’s the last free-flowing stretch of the Columbia River, producing lots of salmon and borders some of the most pristine desert habitat remaining in the Pacific Northwest. So we figured, why not? Back then, no one but a few salmon fisherman ventured into this stretch of the river and we couldn’t find much information about the place, so I made a call to the general store in Desert Aire (pop. 1000 at the time) to ask about it. The owner said “Why would you even want to go there? Nobody goes below the (Vernita) bridge.”

Well, despite the ominous recommendation we decided to give it a try. Turned out to be one of the more interesting places I’ve ever canoed. We didn’t see anyone else for three days, and had the salmon, bald eagles, a cliff-side blue heron rookery, and the surrounding desert all to ourselves. Each night we ate supper while watching the sun set behind the silhouettes of the plutonium production plants. Very surreal.

The Hanford Reach is now a national monument and ecological reserve. You can still do day trips on the river but camping isn’t allowed. 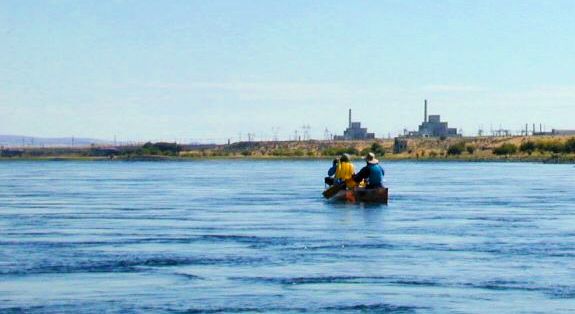 Josh, You should join the DDRC we do stuff every month. August we are in Austin to see the bats on Friday night camping in Martindale and paddling the San Marcos on Saturday

I am guessing 2010-11???
I camped since I was a kid, but the largest flowing water within striking distance as a kid you could walk across in a step or two.
FFwd to being a adult scout leader and a sudden change in direction of the troop, we needed stuff to do that didnt cost much. I had already started pushing packs and not car camping, so when the funds dried up that is the way we transitioned. To take all the boys, having them be independent, it is really hard to back pack and hike due to the size and age differences. You cant expect a 12 year old to hump 5 days worth of gear for unsupported camping. However we had the Allegheny River and got a couple motivated parents. We worked on paddle skills with what boats we could gather for a day, and camping separately, then borrowed enough canoes for all and did 50 miles on the river over 4 days. It was fun. If you notice the angle of the boats, the concept of going downriver was lost on them but by the morning of day 2 all of the ADD issues resolved themselves 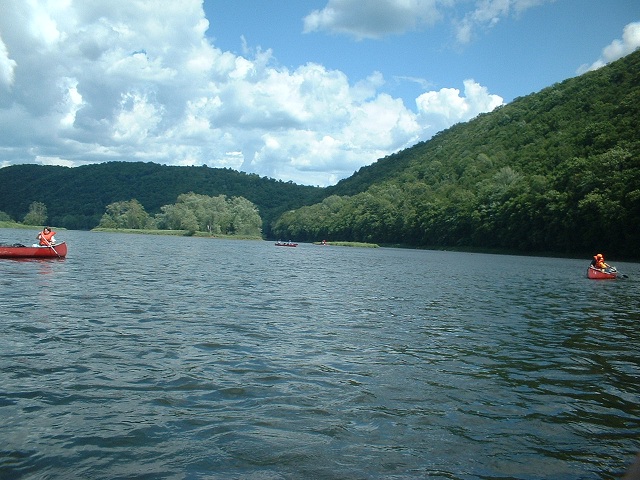 The next meeting I asked the guys who planned that trip if we could do the whole paddle trail from Kinzu to Emlenton. Which we did.

Varmintmist:
Looks like a nice river. I wish I’d gotten into canoeing when I lived in DuBois.

tketcham:
I know the Columbia, farther down, gets pretty hairy. They do a lot of windsurfing because of the winds that blow up the gorge. Wind against a current causes nasty chop.
Doesn’t look too bad in the photo, though.

That windy stretch through the Gorge is a canoeing nightmare at times. But I’ve seen kite-boarders do some amazing stuff.

The Hanford reach is interesting if you start right below the dam at Priest Rapids. Gets a bit unnerving at the big bend below the N-reactor, with big whirlpool boils that just appear all of a sudden. They’ll spin a boat around so fast you’ll wonder what hit you. Most of the rest is just quick water unless the wind blows upstream, then it gets a bit rough.

Algonquin with the Boy Scouts in 1966

First trip was in 1961 on the C&O Canal and the Potomac River that I mentioned above. In 1968, after graduating from high school, I organized the Senior Class Canoe Trip on the same route. We had over 50 people paddle up the canal mostly all boys. It was the 1960s. We had about 70 girls meet up with us that night for a big party. Most had to be home by midnight, but they came back to cook breakfast in the morning. That was 53 years ago, but people are still talking about it.

Thanks for invite. I’ve heard good things about the folks in DDRC. I’m curently a member of the NTRR chapter of ACC. I’ve been using my limited free time to learn WW. I have a pretty good roll but need to refine my strokes and boat control.

I went on a trip on the gunflint trail MN when I was about five. Just about the only thing I remember from back then.

My first kayak camping trip, other than overnite, was in 2000 in Palau(Balau) about 40 miles from Koror to Peleliu, camping on the Rock Islands. I’ve kayak camped many times but never a better one than Palau 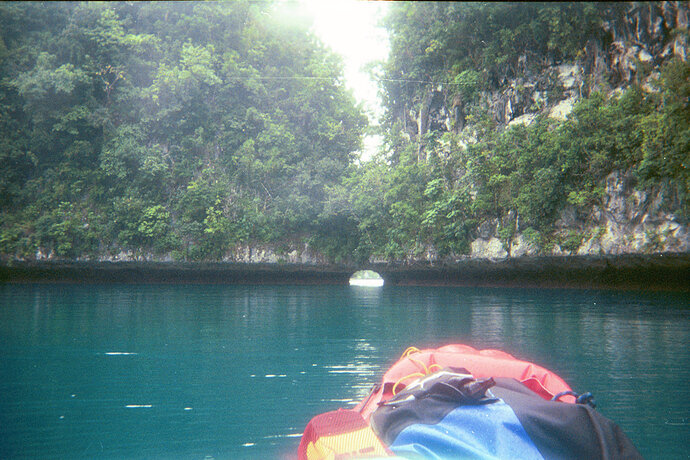 Pretty cool seeing some of the stories and pictures. We didn’t have any family adventures as a kid. Scouts was four to eight kids at someone’s house or maybe the community church. No camping, no scout trips and certainly no paddling. Also being a coastal fishing area all boats had motors. It wasn’t until I was an adult going out by myself that I got to do any camping or paddling, let alone combined.