Eat to live, not live to eat, especially when camping.

That’s my ethic. For me, food is just fuel. It helps if it tastes good but I so dislike food preparation that I am willing to compromise on that account. I make no attempt to eat as I do at home. Boil water, pour it in a bag, stir and eat. Because of that I’ve found the Jet Boil to be my one-person go to stove. If sharing a stove with a partner the MSR Reactor performs better for us boiling water for two. I also carry a flat-folding twig stove in case the Jet Boil or Reactor is unable to perform (which has never happened).

My preferred stove is now “unobtainium”. I’m old enough to mourn the demise of the bright blue butane Gaz Bleuet, which is what I used for years after scoring one in 1972 for only $10. I’ve owned probably a dozen stoves since and that was the easiest to use and control (except on winter mountaineering trips, when the butane would have frozen solid – learned that the hard way). I still have the stove but the cartridges stopped being produced many years ago. Glad I had not pitched it, though, because my local indie outfitter had somebody bring in a bunch of the unused cartridges for their used consignment department and they gave them to me. I will have to be like Elaine from “Seinfeld” and decide which trips are “spongeworthy” enough to use these last cylinders. One weakness was the original plastic 4 pronged pop on base, but I discovered the metal folding tripod base for my big propane camping lantern fit the Gaz perfectly and made it more stable on uneven ground, being 3 point.

I do understand why they stopped making the Gaz – many of us have tales of spectacular explosions worthy of cinema special effects that resulted when people either clueless or groggy tried to remove or install a cartridge incorrectly – puncture type with no intrinsic valve – in the presence of an ignition source (like another person cooking on their own stove at a campsite – funny story but I will spare you that one for now.)
I once had to sit outside the Calgary airport in cold rain for over an hour trying to burn off the remaining fuel in a fairly fresh cartridge so I could remove the canister to take the stove on the plane – you could get up to 3 hours of burn time on one so I finally gave up, looked around to make sure there was nobody nearby with a lit cigarette, quickly spun off the burner as I flung it into a lawn area, where the rapid expansion of the released gas caused the spent cylinder to instantly ice up with rime. Raced to make my gate and then had to explain the weird metal device I was toting in my carry-on at every security check.

I had a Peak One on which the spring in the valve stem failed, filling my car with propane overnight (fortunately parked in my brother’s driveway and not near anything that could have ignited it – all my kayak gear in the car smelled like gas for about a month after that).

Switched to white gas/naptha back in my avid backpacker and mountaineering days because I did so much winter camping. But the priming for stoves like the classic Svea 123 was a messy pain. Popped for an Austrian Pheobus (in the red painted tin can) with integral pressurizing pump. Still have that but have not tried it in a while – it’s kind of a brick at 2 pounds plus.

I will say one thing about those old European white gas stoves: you could get all the parts to fix them when they would misbehave (we stocked them at the outfitters I worked for in the 70s). If a newer stove breaks it is pretty much scrap.

When the tiny MSR stoves became all the rage among gear freaks back in the 80s those of us who clung to our old style European backpacking stoves enjoyed much evil delight at the trials the MSR owners endured trying to get their stoves primed and ignited without setting a picnic table, the ground or themselves aflame. They would brag about how much more quickly the MSRs would boil a quart of water compared to our vintage contraptions and we would just smile and prep our coffee and eggs on our “sluggish” stoves while they struggled to get their stoves lit. Those early MSRs also had little or no flame control so there was a lot of burnt food and scorched pots in that era. Not to mention they roared like a a jet plane was buzzing you. I imagine they have improved by now.

I’ve been debating getting an updated stove, since I have not had anything newer than the expired Peak One, which I won as a door prize at one of my outing club Fall bashes about 25 years ago. I gave away a Trangia and a larger white gas Swedish stove because they took too long to cook anything. There were a few others I had over the years that I don’t recall well (when you move a bunch of times you get rid of a lot of duplicate gear, though never as much as I should).

So I’ll be noting suggestions here. I prefer a stove that can be reliably level on any ground, can support a frying pan or good sized pot on its own, doesn’t require fussy fuel filling (If I can’t set it up wearing gloves, I don’t want it), has full range burner flame control, boils my tea water fast (so no twig and duff units) and packs compactly. For kayak tripping, weight is not my main issue.

Meanwhile, I may have to get some Coleman fuel and dig out the 45 year old Phoebus 725 and see if she still fires up. 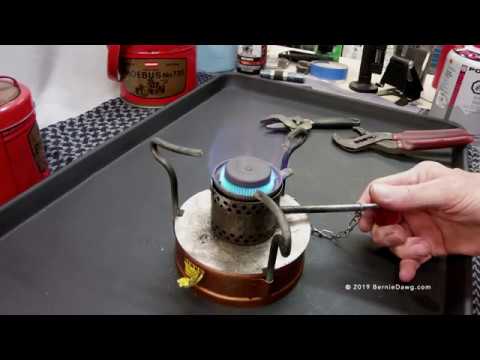 More pre-Patagonia gear from another nostalgic oldster. I retired all my climbing and mountaineering kit except this (sentiment, and it is useful for chopping icicles off stuff.) This was Chouinard’s first shortie ice climbing tool, a mini ice axe head mounted on his standard piton hammer shaft.

Got this back in 1976 when Yvon and his ice climbing buddy Henry Barber were still driving around the country bringing those little chunky catalogs and samples of their new hardware to their first bunch of outdoor outfitter dealers. When they would come to the shop where I worked we’d take the two of them out drinking after the store closed at a bar near some ashlar stone bridge piers which they would free climb for our amusement. 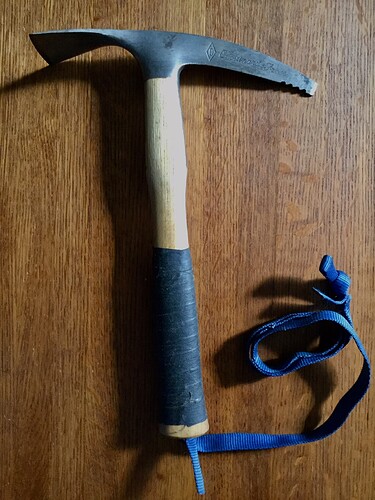 The wife decided that she wanted to take you all on a camp stove tour. She’s taking the reigns on this one and showing you how to use the following stoves; Trangia, Coleman one burner, MSR Whisperlite, MSR Pocket Rocket. Her skills were good but the Whisperlite proved to be a formidable opponent. Hope you enjoy. 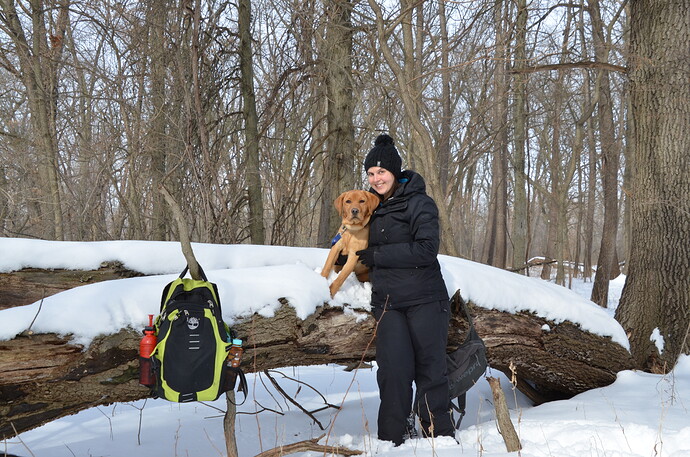 I have many one burner stoves …MANY
The last several years I have been using my Optimus Nova. When I carry 2 {for long trips} I usually carry a MSR Whisperlight international as my second.

I like to cook and so do my friends. We take turns cooking dinner to see who can make the best meal. I hate dehydrated food except for emergencies and long trips in the heat. I often bring an aluminum Dutch Oven. I baked a cake for my 65th birthday on a river trip. Food is an event. It is something to look forward to. What else you going to do at night?

Sleep. I’m usually in my tent before dark. I’m boring.

Depends on what night of the trip.

The first one? Drink our faces off.
The second one? In bed early for recovery and regret.
The third one? Rally. But not as hard as the first, because we “learned something”.

Rinse and repeat… Every trip

Nocturne For the Backbay Clan MacDuckhead

Duckhead,
I used to have a sailboat at Lake Tahoe. I had a friend from Scotland that grew up sailing the Irish Sea and he was good in rough weather. We would reef the main, but on our smallest head sail and head out in the rough. when we were heeling along with the spray coming over the rail, I used to make him read Robert Burns out loud. It was wonderful.

Thanks for reminding me of it.

My go to stove was MSRs XGK. It could be cleaned in the field and would burn gasoline. Real handy on the AT and in Mexico. You didn’t cook on this stove. You just boiled and burnt stuff. Loved the foldable windscreen. Less cantankerous than the optimus, phoebus, and svea stoves but you had to check the fuel bottle o-ring and ream out fuel line frequently and clean the orifice. The svea was akward to balance pots on and the wicking would burn up or the orifice would require poking or the “needle” would get broken. If you wanted to simmer you used the peak1 or whisperlite or used a butane or propane stove. I did a fair amount of winter camping so propane/butane were never an option although the Gerry stoves looked well thought out. I’ve since used my propane stoves in winter without much issue in winter. Rethought that a bit.

I went to a lecture where some guys talked about climbing the lotus flower tower, in the brooks range, in the winter. They primed the stoves but dumping fuel all over them and setting them afire!

Once ran out of gas between Golden Road and Rockwood Maine. Used a can of coleman fuel to get me to civilization. I wasn’t sure how it would run in the s10 pickup. I Was just hoping the vehicle didn’t go boom. The engine seemed to run good on it but I’m not looking to repeat!

The dragonfly being a newer MSR version addresses some of your issues with the old stove. It has good simmer control by adding a second valve, still able to run unleaded, coleman fuel, diesel, kerosene or whatever by choosing one of two included jets. Guys anymore will try and say not to run gas in them but I’ve run gas in all of the coleman fuel stoves and lanterns for decades and MSR says it’s fine. Best to run unleaded and without the alcohol in it because alcohol is hard on the rubber O rings. They are designed with a rod inside to clean the jets by shaking them. I do need to buy a rebuild kit to bring along though, just to be prepared. Great in the cold when canisters tend to not work. Fuel is available everywhere. As for burning the coleman fuel in your truck, it’s pretty much unleaded and fine. On an occasion I ran saw gas back in the day. That will leave a tad bit more smoke in your exhaust.