I am looking at a used 16 ft fiberglass canoe that has a decal that designates it as a “Guide.” Photis below.

Any idea as to manufacturer? Owner says they have no idea. Kind of looks like a OT Guide 160 - but were those previously made of fiberglass.

Thanks in advance for any help 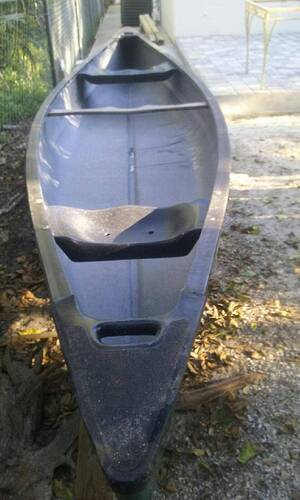 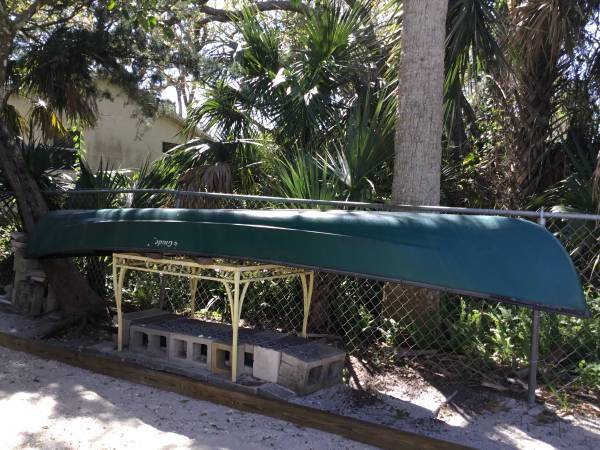 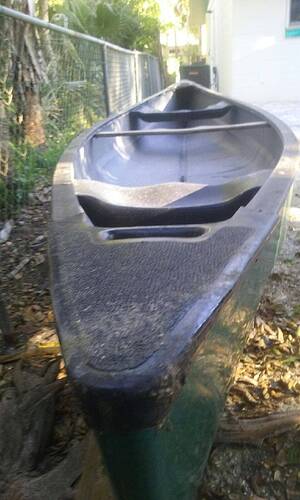 It looks to me like an Old Town Guide, and I don’t believe the boat in the picture is fiberglass. I’d bet that it’s polyethylene. The current price for a new one is less than $1,000, and polyethylene being what it is, the used price shouldn’t be all that high (I’m guessing that half the new price might be fair, so the price seems good of the boat is in decent shape).

Agree. It looks like an older version of the Old Town Guide made of three layer, roto-molded polyethylene. Certainly not fiberglass. It will be heavy as sin. Old Town claimed 86 lbs and I would not be surprised if it came in a couple of pounds heavier.

If you don’t mind the weight, if it is in reasonable condition it should be a serviceable canoe. If you are considering it, check the hull carefully for hogging (an inward deformation of the hull bottom).

Thank you very much for the quick responses!

@pblanc said:
…check the hull carefully for hogging (an inward deformation of the hull bottom).

I googled “hogging” and it seemed in most of the photos that it is a fairly dramatic deformation. Are there lesser or more hidden signs I should be looking for?

Depending on the kind of performance you are looking for from a canoe, hogging need not be a deal breaker. It makes the boat a little or a lot slower and a little or a lot harder to turn, depending on how pronounced the hogging is. Plenty of people paddle hogged canoes and are satisfied with how their boat works for them. A discerning paddler with specific expectations regarding boat performance would not be happy with such a boat, but most canoe buyers are the complete opposite of that.

Hogging can be rather subtle, and any degree of upward bending of the hull into the interior of the boat is considered hogging. Further, hogging will generally be worse when the boat is in the water with paddlers on board, or the hogging will appear at such times and yet not occur when unloaded or not in the water. Weight applied to the seats is counterbalanced in large measure by upward force on the bottom of the hull, and if the hull has any flex, the central parts of the hull will bend upward due to that buoyancy force. When inspecting the boat on dry land, pushing on the bottom of the hull with your hand will give some indication of what to expect when it’s in the water and loaded, at least if you are used to seeing hogging happen under load.

Pblanc will have better answers than I about what other problems to look for, but in general, poly boats are practically indestructible and if you don’t see damage, the boat is probably “good enough”. If there is damage, poly is very difficult to repair. Scratches on the bottom usually are no big deal and are not considered “damage” unless there’s been severe wear.

That looks identical to the somewhat vintage Old Town Guide 16 that my ex-boyfriend had. As others have said, it isn’t fiberglass but VERY heavy plastic. The ex’s weighed nearly 90 pounds and was a bear to load on the truck. But it was a decent canoe on the water – we mostly used it for flat water river and open Class 2 fast streams. If it’s not hogged or cracked, I would probably pay $250 to $300 for one. Looks like you are in a sunny southern state though, so I would inspect the hull carefully for sun damage. Fading is OK but it shouldn’t have a dry, crackly look.

You can put a long straight edge on the bottom of the upside-down canoe to check for subtle hogging but if the degree of deformation is not enough to be appreciated with the naked eye, it won’t be enough to affect the performance of the canoe significantly. Three-layer poly canoes are prone to develop deformation over time. An example is when the canoe is supported upside-down on racks or bars too close to the ends and the entire central portion of the canoe sags down. They also sometimes develop a wave-like deformation of the hull bottom that some refer to as “oil-canning”, although I reserve the use of that term for a different phenomenon. Again, mild degrees of deformation are not likely to cause a significant degree of performance degradation.

Primarily, you should look for obvious problems like cracks or soft spots in the hull. Those molded, plastic seats that Old Town often used are not the most comfortable for many people. Also, sometimes the undersides of the seats where a nut and washer bear on them at the ends of the machine screws suspend them from the gunwales will crack or break through completely. This type of damage requires replacement of the seat as it cannot be repaired and renders the seat unusable. Check the ends of the central wooden yoke underneath the gunwales for signs of rot.

Things like seats and yokes can be replaced but obviously this would require additional time, effort, and expense.

Good clarification there by Pete, about how minor hogging is likely to be no big deal. It’s what I was getting at when I said “depending on how pronounced the hogging is”.

That point about poly canoes stored on racks and sagging badly when the cross bars are too close to the boat ends reminds me of every example of the “Rogue River” brand of poly canoes that I have ever seen. All of them that I’ve seen have been upside-down on racks and sagging close to six inches in the middle, even new boats in the store, not yet sold. That’s one brand of canoe that you don’t have to inspect for hogging. Simply knowing the brand is enough.

Your mention of “Rogue River” is timely as I have recently been looking at on on “OfferUp.” Seller has posted photos of every angle other than hull.

Thanks again to all for the info. It is very helpful.