I’m planning a trip to Pictured Rocks Nat’l Lakeshore (Lake Superior - Michigan UP) and have a pair of 16’ sit-on-top fishing kayaks. Will these be suitable (aka ‘safe’) to use exploring the shoreline? Not planning on any big crossings or getting too far from shore, but understand the water/weather can be unpredictable.

Any advice/recommendations welcome. Thanks in advance!

I have had my 16’ Tarpon out in conditions that made me want to never go back BUT that was in a warm ocean . The boat handled it just fine but I was left with a pulled groin muscle that took months to heal.
Fishing boats tend to have huge wetted surface areas that increase resistance to wind and waves and you take the brunt of it.

Sit on top kayaks are generally pretty ocean-worthy vessels. Roger Schumann, in his book Basic Illustrated Sea Kayaking (https://amzn.to/2YuunnF), ran a chart based on the ACA levels and that shows SOTs being usable up into level 4 conditions. Copy of that chart can be seen at:
https://www.dropbox.com/s/s4xbs6bb76dft6f/ACA-SkillLv%26SeaConditions.23.jpg?dl=0

That said, it matters if the kayak is properly sized for the paddler and the paddler has the skills to handle it. Only possible concern with a 16’ fishing kayak is some (like the Stealth brand composite ones) can be narrow, which may provide balance issues. If a mass marketed one usually found in the US, likely not narrow, and if anything, may be a slow barge.

(Full disclosure - I helped Roger in the publication of the above book by taking any of the photos for him. This was unpaid).

L4 describes the conditions I was in. It was fun riding up a wave and slamming down on the backside. The sea kayak with me handled it with much more dignity.

If I am paddling Lake Superior it would only be in a fiberglass or wood boat with a cockpit and a cover. It would be around 17 feet or a little more and I would be wearing a dry suit. The lake is huge, cold and the shore line is rocky most of the time. There are places where you cannot go ashore. I have to differ with the other contributors and cannot recommend a SOT for the largest lake in North America.

Serious question, l do not know Superior. Are there easy landing points In the stretch around Picture Rock? Op-ed has indicated the would stay near shore. But staying near a pile of rocks you can’t land on, on a lake apparently prone to steep waves, seems to foil those plans.

Just a comment that the water is cold enough to generate a gasping reflex and quick hypothermia even in summer so you do need to dress for cold water immersion. You’d also be wise to have more than one communication device in case you get in trouble. There are indeed areas where it is difficult to land and the weather can change very quickly. Your boats may be fine for shoreline cruising and are good in that you can get back out of the water if you go in but don’t underestimate the danger, there is a reason they have warnings for paddlers that only sea kayaks are appropriate. Pay close attention to weather forecasts and wind direction and beware of even gentle winds that will blow you away from shore.

No. Here’s the warning from the National Park Service of Pictured Rocks National Lakeshore:

No, there are no safe landing points around Pictured Rocks. Lots of cliffs and rocks in the area. Lake Superior also makes its own weather, so weather reports aren’t 100% reliable.

Here’s an incident report about a Lake Superior symposium event in 2016. It’s long, but gives a good idea of how fast things can go wrong for even experienced paddlers in sea kayaks.

@Rookie
Suffice to say l had questions about the decision making in this incident before l got to the analysis at the end.

One thing l did not see, did anyone check afterwards what the winds were that day? Or have and use an anometer?

Reason l am asking is that l have tried to paddle against winds where we literally could not make progress. That happened at around 28 mph, we just had land speeds, with waves big enough to add to the issues. The forecast for that day was 15 to 25 knots, which at the upper end puts it solidly into the wind that stopped us. Also matches what Ken Fink said at a paddling symposium many years ago, though likely few remember him now.

Rookie is no rookie.

Doubt if anyone had an anemometer. Do you use one? If so, can you recommend a brand? I’ve been thinking about adding one to my kit.

I was going to add one to my kit. But then Jim got sick, a year of increasing issues then two years of chemo etc. Frankly it all happened at a point in my life where l was no longer interested in the harder core paddling that had preceded those events. These days getting my roll back on one side each season, used to have both, and assuring a couple of other reentry options is about as skillful as it gets. I choose paddle routes very conservatively on weather and on my own paddling fitness. Or lack of.

If l was still paddling like that l would have one though. Because we had a day where things ramped up beyond expectations. Happily was a salvageable disaster. But too damn close to a newspaper story, and pulling out an a wind meter at snack break would have given us information we should have had.

One of our crew Did have one in his forward hatch, pulled it out after we had landed. But sorry, do not recall the brand.

From the picnic shelter at Pictured Rocks. 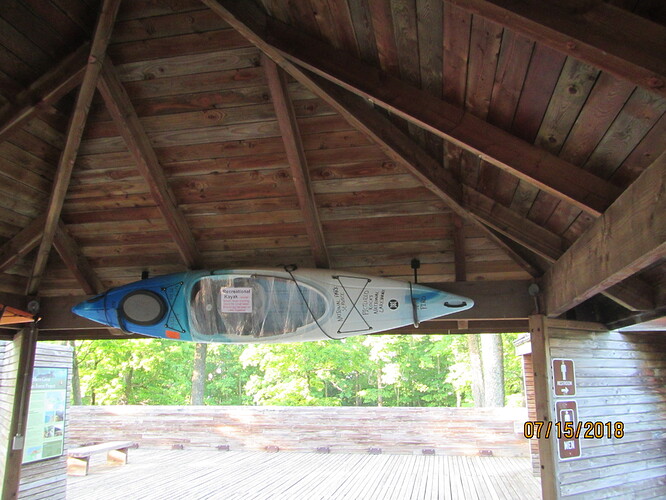 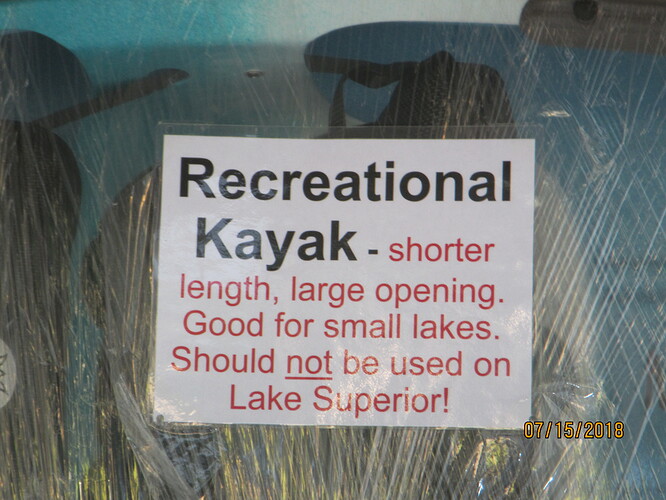 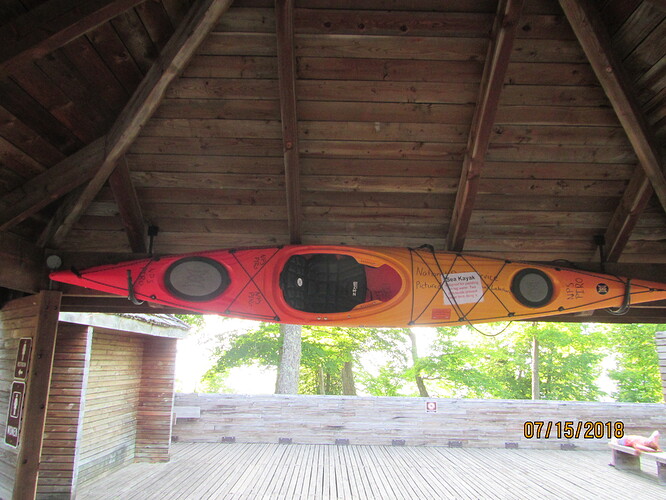 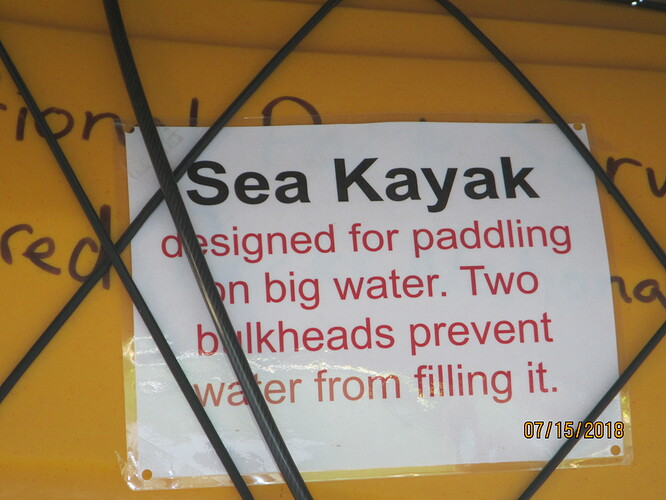 While we were there a truck showed up with SOT and the ranger and the oufitter all had bad things to say about the SOTs. Are there days when you could perhaps. The day we showed up was flat calm. The day we decided to paddle our sea kayaks were ready but it was 2 ft with 11 seconds growing to 4ft. Superior is an inland sea. We kayak in the Atlantic a real sea/ocean. The difference is the waves in the ocean are uniform and normally farther apart…the seconds. The waves in Superior at picture rocks are “washing machine”. Fresh water washing machine.

There are stories of many people with flat water kayaks and outfitters with sea kayaks that have lost people in Superior when wind and water picked up.

SOT fishing kayaks can be more like “skiffs” than kayaks. This 16 ft fishing kayak really tells me nothing about the boat capabilities. If you have a wide stand up-able kayak with a “lawn chair” like raised seat it is likely not going to make it.

Lets look at the map. We launched at Miners Castle which is about the best launch at the Pictured Rocks. All of that area labled “Pictured Rocks” in the water is cliffs. Miners Castle is 265 ft if I remember. It is dangerous there. THere was a rock slide caught on film near some kayakers last summer. It is how the cliff was made. Winds were coming from the north across the whole Superior, seems like 165 miles if I remember. It was rough. However we could have paddled if we went down between Sand point and Munsing. That area was sheltered by the island. Water still real cold. Neoprene and dry suit still required but calm. For a while. There are lakes in the area. There are rivers. Yes and some sheltered areas. But Pictured Rocks is not one of them. 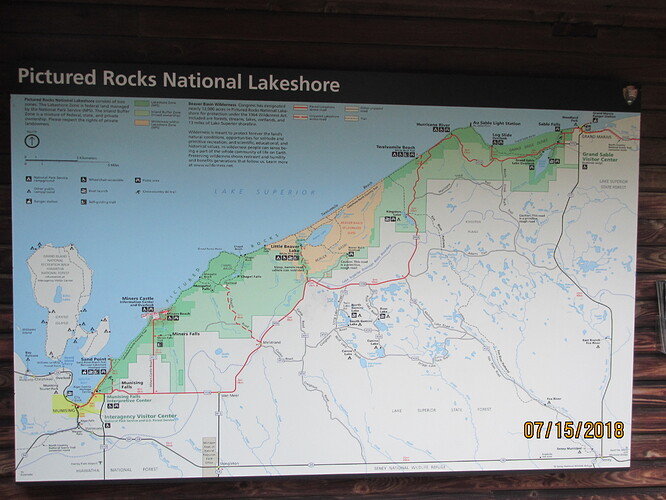 A note on “sheltered” areas. They are paddle able where ever they be. Around here people in all matter of kayak go out in the ocean on a west wind. Which gives them calm water near shore, if the ground swell isn’t running. But they drift out or the forecasted wind changes and they can’t get back to shore . That is what sheltered areas are. Good for a while if you respect them. But still capable of ending your day(s).

So, yeah, it’s a beautiful place and not for the unprepared. We were hiking the trail, camped at Coves group site, on a calm hot September afternoon. A part of our group had headed back about a mile to a location where they could get down to the lake to swim. I was back at camp. All of a sudden with no warning (to us about 30 yards from the cliff edge) the wind hit with a vengeance. Not a day to have been caught out on the lake. Those that I know who do paddle there say that clapotis will occur much farther off shore that you would expect. Here is a view of the landing possibilities not far from where we were camped: 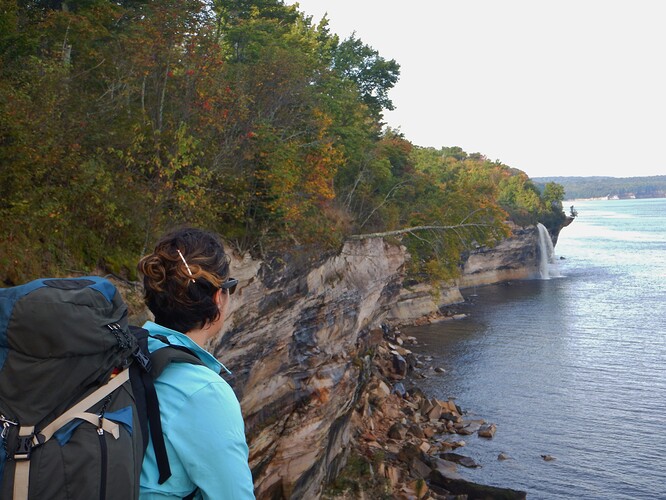 There are tour groups that will take a group out on a mother ship and put clients in the water in big tandems to paddle along the cliffs. That might be a good option.

The other problem with steep rocky shorelines, besides not being able to land, is that waves often reflect off them and go back out to sea, resulting in confused seas near shore.