Very brittle, cracks everywhere, had some top plates I made from Osage Orange. Worked for a while but there are cracks everywhere that have compromised structural integrity. Old Town says they have replacement vinyl gunwales for a good price but they won’t sell to individuals, only dealers. Have tried 4 dealers in Ohio, 3 have said no we can’t order those, another hasn’t answered yet after about a week. I found a place in Minnesota that sells them. They want $500 in shipping costs! Looks like I am down to fabricating from wood or completely wrapping the gunnels in fabric and G-flex. or just getting rid of it. Too many cracks to address just the cracks individually. I know this was a topic in the past but am hoping someone might have more up to date advice or suggestions. Thanks!

I’m far from a boat builder, but that sounds like a crazy amount to pay for them to get shipped to you. I guess it is the length that makes it an issue.

Sounds like you are handy with woodworking and if the boat is worth saving otherwise I would take a shot at tearing it down and making a wood set. Most likely I would look at two piece with a bent inner and outer piece. I have never done it but would give it a try.

I just did a search and see some aftermarket ones with free shipping. Not sure what they would fit but look at that also.

Thanks for the link. I have seen those but I wonder about their strength. Looks like, unlike the originals, there is no aluminum channel. and to ship free, they must be sent as a coil. Building these out of wood would be a big job and if I want to retain the plastic decks, I would have to do some head scratching. I am tempted to try to encapsulate the old gunwales in fiberglass cloth and G-Flex. Couldn’t be any worse than what is on there now. At age 70 it probably isn’t likely that I need a 30 year repair anyway. If I could get some occasional use out of the boat for another 5 years I would probably be happy. I could afford a new boat but I have a lot of memories in this old canoe. If anybody has any ideas about the encapsulation idea I would love to hear them.

I repaired a Folboat kayak deck years ago that had rotted out to just keep it going a few more years once.

I took fiberglass mesh drywall tape that comes in a roll and has sticky on it to hold it in place. I put strips of it over the bad area going in both directions and then I mixed up some fiberglass resin and painted it on. Then I added a second layer after it cured and another coat of resin. It was as water tight as a ducks behind.

I think you could run a few layers of tape down the gunwales and paint on some resin and it might make a cover that would hide the cracks and add some strength. Take the decks off first. I would sand the gunwales first to roughen the surface for a better bond. Once done paint them black.

They make fiberglass fabric but it is just cloth or matt and you have the mess of wetting it to the surface.

It is just an idea I don’t guarantee the results beyond I have used the fiberglass drywall tape a few times like this and it has worked for me.

Finally got a call back from a distributor in Cincinatti who can order the same vinyl gunwales for me much cheaper. Now trying to decide whether to just patch or replace. It would also need about 70 rivets - priced from Old Town at $.90 each. I think I am going to patch first with some g-flex, fiberglass cloth and perhaps some wood reinforcement at critical spots. At least I have an option to tear it all out and replace them down the road if this looks like it is not going to work.

I had a Chipewyan about that same vintage, a '76. Light blue hull with white gunwales. 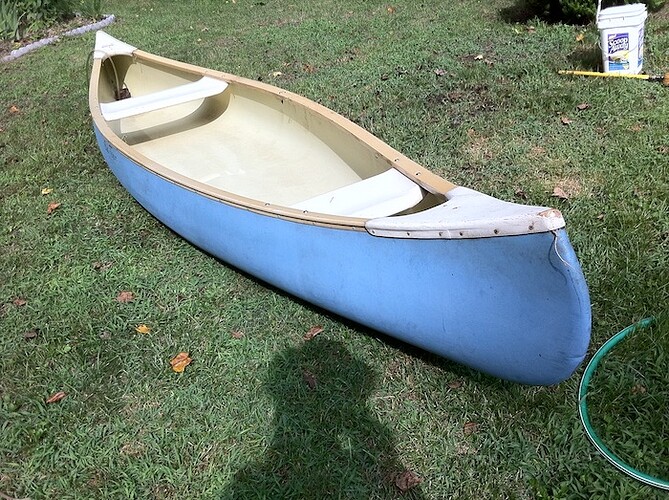 I would be wary of the fiberglass/gflex reinforcements of the gunwale unless you plan to run the glasss onto the hull below the gunwale. I don’t think there is a book on this repair. It might work. My fear would be though you have a nice solid gunwale, it is still the white vinyl that is attached to the hull, and the white vinyl is known to be brittle and prone to fail. What happens if the gunwale lets go of the hull?

I’d order the replacement gunwales, but no way I’d pay almost a dollar a pop rivet. Hardware store or order online for those.

It’s gonna be some dollars and some work to do the fiberglass repair, and I’d rather spend the money and time one replacing the gunwales. It’ll look better and you have a greater probability of a successful repair.

FWIW, I also restored a very wrecked, freebie Chipewyan. It had wood gunwales, which I replaced with home made, ash gunwales. It’s not that hard, except you need a lot of clamps and more hands than you have. And, then you have wood gunwales, which are lovely, but you need to maintain them by occasional cleaning and oiling. I suck at maintenance, so I got rid of that boat, too.

I kind of regret ditching those boats. They would be ideal for the kind of boating I do these days. But I don’t miss that white vinyl or wood gunwales.

Thank you for the great response. I had already rejected the wooden gunwales. Not enough hands or clamps as you say. I may go ahead and order the gunwales at some point but will probably experiment with the g-flex and fiberglass in the meantime and maybe just take it no further than my pond in case of disaster! I get what you are saying about encapsulating the heads of the rivets onto the side of the boat but that sounds potentially irreversible… I will experiment with some adhesion tests and may do some patches and see how it holds. It is interesting that most of my cracks are not around rivets but are accross the top of the gunwales. I think I have three cracks right at a rivet. I have a lot of history with mine and it also has those cool cane seats with the removable backs. I dropped them down about 3 inches on hand turned osage orange dowels and put kevlar skeg patches on. Those patches have been on for over 30 years and have done a heck of a job.

I have put on weight and years and don’t know how realistic it will be for me to use it much but I’d like it to be safer in case I want to pass it on to someone.

I just noticed that your blue canoe did not have a center thwart or yoke. Mine rotted out and I made a replacement about 20 years ago.

Ed’s canoe sells wood Gunwhale kits. The sections are in halves so the fit in a smaller shipping container. I installed a set on an old OT Penobscot years ago for a friend and they looked great. Takes a bit of Time Drilling and countersinking all the holes, but It was worth it.