New member here and I need help ID a Mad River Canoe I got as a birthday gift when I was 12 years old, 32 years ago. HID is MAD37878M79K. It measures 13’-0" with a single seat in the middle. From what I’ve learned so far it was made in 1979 and is Kevlar. The canoe is very light. I am thinking it is an Explorer but not certain. I am also wondering about its weight capacity. Any help would he appreciated. Thanks!!

The HIN follows the “model year” format and indicates that the hull was certified (built) in June of 1979. Mad River often appended an “-K” to the end of the 12 character HIN on their Kevlar boats but I don’t know when they started doing that or if they did it consistently throughout their history.

In this case the “K” at the end of your HIN does not denote Kevlar (although for all I know the boat could still be a Kevlar model) but rather denotes the month of certification, June in the model year format. The five digits after the three character manufacturer identification code (MAD) and the last four characters denoting month and year of certification could be used by the boat makers in any way they wished. The 37878 could be a model code plus serial number, but some boat manufacturers just assigned serial numbers to hulls sequentially regardless of model as the came off the line.

If the boat is truly 14’ in overall length it is clearly not an Explorer. Mad River never made an Explorer anywhere near that short. Some solo canoes that were made by MRC back in 1979 included the Compatriot, the Screamer, and the Courier. But the Compatriot was only 13’ long, the Courier was 14’ 9" long, and the Screamer was in excess of 16’ in length.

Mad River did make a 14’ canoe back in 1979, the Winoooski, which was usually set up as a tandem. It is possible that someone reoutfitted a Winooski as a solo or had it outfitted that way on special request. But the Winooski would be awfully beamy to paddle as a solo from a central position with a maximum beam of 39". If the beam of your hull at center (less the thickness of the outwales) is around 39" my guess is that it is a Winooski if your overall length measurement is accurate.

Yeah, sorry I misread the tape measure, it measures 13’-0". So I guess that makes it a Compatriot then?

Yes, it is almost certainly a Compatriot. I don’t know of any other canoe that MRC was making back then that was as short as 13’ except for the 13’ 1" Missisquoi which is a square stern.

A Kevlar Compatriot should weight around 35 pounds.

If you look at the #11 post in the following thread, you will find a photo of a former frequent poster on this forum in a white Mad River Compatriot with a small companion:

anyone got pics of there canoe My 3 mick

Yep, that is the exact canoe I have in the picture! I weighed mine on a fishing scale and it weighed in right at 30 lbs. so it’s kevlar. Now I just wonder what the weight capacity is. I am planning on using it with my 12 year old for fishing. combined with myself, my son and our gear we are probably right at 400 lbs. If I remember correctly it held my dad and I just fine back in the day. Thank you for all your help. I am surprised at the lack of information there is on the internet on the old Mad River Canoes.

I have no idea what weight capacity MRC listed for that boat. Manufacturer’s weight capacities very often didn’t mean very much in practical terms. They were based on how much weight could be loaded into the boat on absolutely calm water while maintaining some minimal number of inches of free board. The center of gravity of paddlers is much higher than ballast. The manufacturer’s capacity might work in absolutely calm conditions if nobody in the boat moved very much.

I have only seen one Compatriot in real life. It was owned by a smaller adult male who liked it. I didn’t paddle it but it looked to be a boat best suited for an average to smaller paddler and it did not have a lot of depth. I think 400 lbs might be pushing it but try it and see. Just stay close to shore initially.

I have met him and he is not a small person, although he might have been less large when he owned the boat. I never met Jim Henry either but I don’t believe Jim was a small individual. So perhaps the boat will be OK for your intended use. 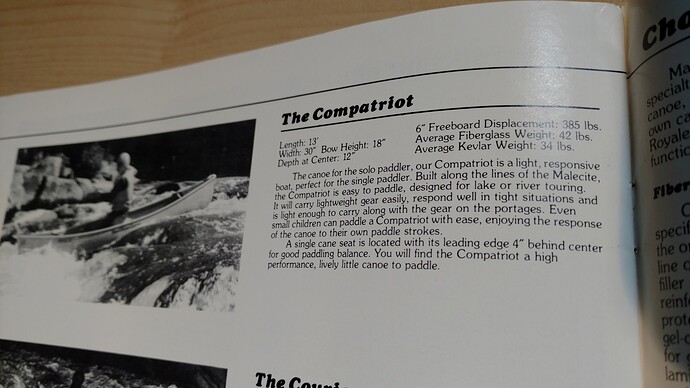 With a 6" free board capacity of 385 lbs, 400 lbs would leave the boat with very little free board. I would consider that adequate only for very calm conditions on warm water preferably close to shore.

Also, keep in mind that canoes have an optimal design capacity. That is usually significantly less than the maximal 6" free board capacity. If you are sinking half of the depth of the canoe at center with 385 lbs, you will submerge even more with 400 lbs. All that wetted surface area and sunken hull will create considerable drag so you probably won’t want to paddle very far or fast.

Dick Summmers…Awesome, thanks for sharing!!

pblanc…We will be using it exclusively on inland ponds and medium to small lakes. We’ll take it on a local pond first and see how she does. Thanks for all the information!

Very cool! What book is that? Is the Mad River Guide in there?

Was never designed as a tandem. Are you really small? Two kids could use a 13 foot solo. Mohawk used to make kits to adapt the Solo 13 for children. But once you were 8 or so the boat was just too small.

Going to be like paddling a very tippy log… its called birling. Watch your head. Any movement of the head outside of the gunwales is going to dump you. I cannot imagine two fishing?

We used to put two people in larger solos sometimes but they were skilled canoeists and instructors and this was done with the expectation that things would go over . We put four instructors in a 15 foot tandem once for a play Peter and the Wolf the four were portraying hunters. There was exactly two inches of freeboard and we did a heeled turn with the rail in the water… Very carefully.

You will have to always be mindful of your posture… Parallel to the tree trunk and loose hips.

I have a number of early MR catalogs, price sheets, etc. Pre Guide… they have the Courier.

If you do a Google image search on MR Guide, there should be some catalog scans that come up.