2 good deeds in one day

Today as I pulled up to a put-in on the St Joseph River I see a young man with a big pile of golf balls and he is driving them into the river. So I took some pictures and movies and we ended up having a discussion and he told me that he was genuinely sorry and genuinely did not know that he was doing anything wrong and said he would never do it again. I told him that those golf balls last forever and will poison HIS water. We ended up shaking hands. He packed up and left.

Then as I return from an upstream paddle with the coonhound I see a Subaru with a (Hobie double sit on top with pedal power) kayak on top park right behind my vehicle. We end up chatting and I tell them that the river conditions are quite serious with a strong current around 3 knots with near record water levels, confused currents and underwater trees that can bump you. I told them they would have a hard time going upstream at all and that turning around could be dangerous. So I recommended that they paddle in the safer flooded area shown in the pic…the main channel of the river is actually not visible in this pic. They thanked me for telling them about the conditions and told me that this would have been their first time out (!!!) with their new kayak then they thanked me again and left. 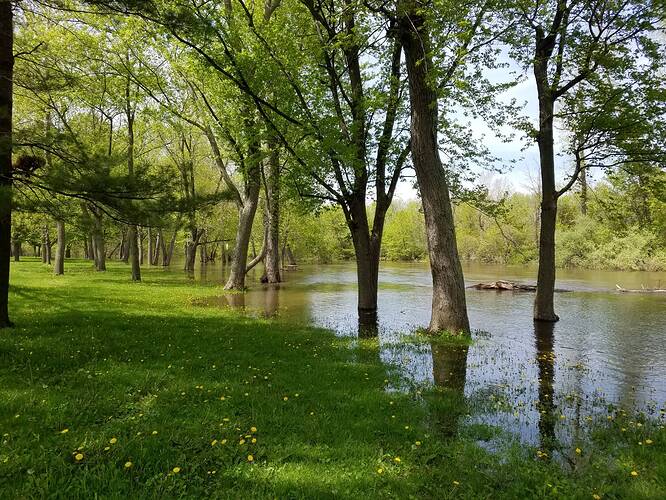 Good work, Tom. Hoping those paddlers had PFDs and wore them. You may have saved a couple of lives today.

No good deed goes unpunished…ahhh must have been something in the air, Paddled the Buckhannon river (WV, Alexander to Tenmile) yesterday. Left the house at 9:30 am and got back at 2:00 am the next morning. Burned some time locating my vehicle, Someone forget their pfd and I loaned them my car (the only car at the put in) and the all important county road map to retrieve their pfd from a take out vehicle so that they could meet us half way down the run (at beans mill). That did leave me with the challenge of finding my car after paddling. but at least I was smart enough to take the county map with me down the river after meeting up at the i/2 point.

At the end of the run my friend David drove me back to my car We definately had burned some daylight slacking the first half of the run )so we could meet up with the paddler who forgot his pfd)… The we burned some more time after the paddle when we made a wrong turn. but finally we got on bean’s mill road just as it was getting dark…

While doing so we encounted 7 teenagers, in the rain and dark walking up a steep hill. One of the teens was using a crutch. Their truck wouldn’t start so they decided to hike out. My friend (who has a pick up with some clearance and 4 wheel drive) was able to get to their vehicle. I waited at my car for him to return. While their vehicle would start with jumper cables they eventually figured out the belt to the alternator was the culprit so it would die immediately. So David with his truck and I with my Subaru hauled the 7 teens to Weston (not on our way home) and dropped some of the kids off at the hospital (where a relative had been admitted).

Situational awareness pretty low with the teens, They knew the vehicle was prone to breakdown yet still went to a remote location (no cell service, 4 wheel drive, maze of wv backroads) and decided to leave right before dark. Much of their conversation revolved around wanting a cigarette, and forming a ring of protection while encountering a pack of coyotes in the dark. They did however tell me about how they had a sword, and knife, and of course the crutch for their ring of protection. A memorable night for both them and me.

McDonalds tasted pretty good at 11:00 pm. It had been a long time simce I had the granola bar for lunch. I had to prop my eyelids open for the remaining drive home.

How was the river? Definately an after thought but it was fun. That makes two trips in a row where we’ve had shuttle woes- On the last trip David had a busted oil pan. Ahhh river shuttles, that’s half the fun!