Earlier this week I bought a 20’ canoe online. Yep, 20’. After the clicking and typing, I realized that I need a way to transport it.(!)

My initial thought is to modify a boat trailer, and to transport the canoe right side up, like a jon boat. With that in mind, I appreciate any advice re: what to look for in a project trailer. I want advice on the length and width of the trailer, and whether centered bottom rollers are a good idea, or if they could damage the seam of the canoe. All advice appreciated.

I would also like to hear some thoughts from the “flip it over” brigade. Other than catching less wind and less rain, are there any other advantages to hauling the canoe upside down?

I would haul it on the gunwales. Much easier to secure solidly.

When I built my trailer, it started life as a cheap 40x48 that you can get at Harbor freight or northern tool. I extended the tongue and used unistrut to make crossbars to support it. Worked well, but now I just rooftop my canoes.

This is the trailer, it had two removable tongue extensions. It made a trip from MA to WI and back to get a kayak and from MA to IL to move some furniture (with one section of tongue removed). That canoe was somewhere around 18’ long 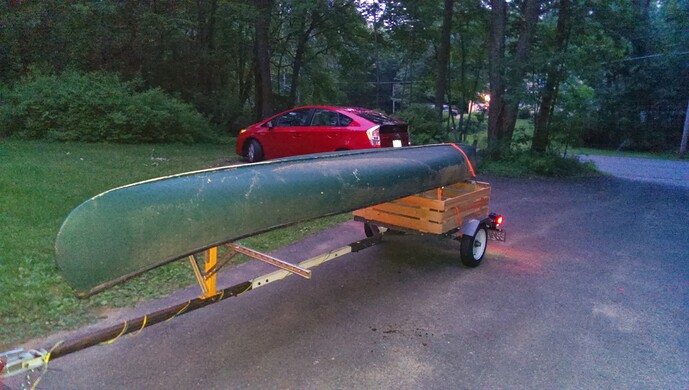 On the gunwales it stays put and does not roll.
Extend the tongue if you need more length.
I have used a trailer for a wood OT Guide 18 for at least 25 years. It weighs around 90 pounds.

Mike, that picture is very helpful, and it gives me some ideas. Thanks.

Any tips for designing a canoe trailer that’s easy for one person to load/unload?

Not with a canoe that heavy.

I found it “easier” to rooftop my 85 lb canoe as I didn’t have to bend and lower it.

If you are paddling alone, you 100% bought the wrong canoe. A 20 footer is for 3 people, or two people and a massive amount of gear.

I have always liked big canoes. I have been on solo overnight trips with 18 foot boats plenty of times. A 20 footer is harder to control solo, especially an Al model with a keel. Two people no problem. Always room for more stuff or a dog team. I wish sometimes that my OT Guide 18 was a 20 footer. They are relatively shallow boats and only 12 inches deep.

Well, I had a similar, though not identical, problem. When I had to replace my last small pick-up I ended up with a Rav4 that had only three feet between the cross bars and very little roof to work with - and an 18.5’ canoe that needed to be transported somehow. I just didn’t think that was enough separation in the crossbars to safely support that long a canoe. (I always had 6 or 7 feet on my truck cap racks, which gave me a nice secure set-up. I figure if the boat is supported in thirds, its pretty well supported.) And I had five other canoes that I might possibly want to haul simultaneously.

So, like you, I considered modifying a regular boat trailer to make a canoe hauler - and I just couldn’t stomach paying the cost of a full on commercially manufactured canoe trailer. I’m not a wealthy man.

Here’s what I ended up with. (And there still are - and perhaps always will be - some “finishing touches” yet to add.) 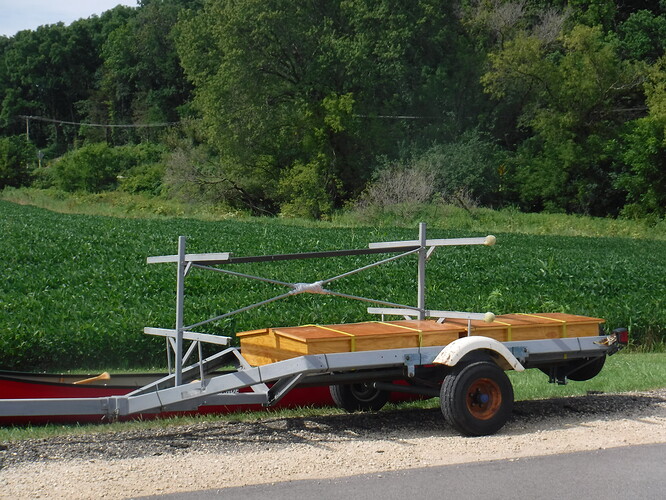 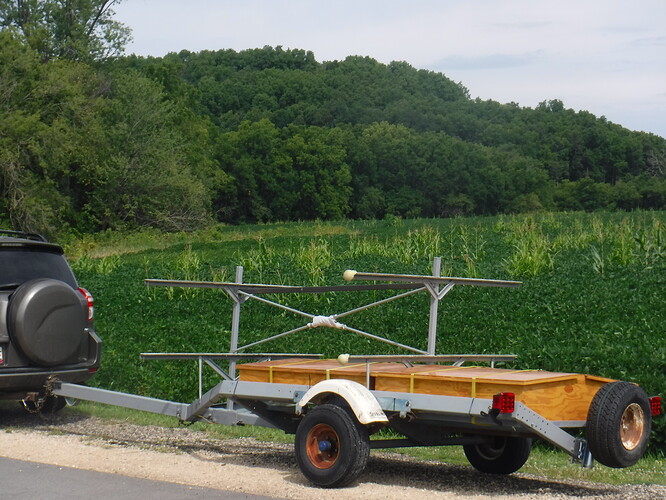 For your project the welding job would be cheaper, I’d think.

What I learned: This thing vibrated a lot initially. Use 2 or 2 1/2" square steel for the uprights rather that the 1 1/2" sq. like I used. (I had to add additional side bracing to calm things down.) Use 1 1/2" square steel for the horizontals rather than 1 1/2" angle iron. (Again to mitigate vibration.) Same with the center bar that runs between the two supports. For a single level, single boat, rack you may not need the diagonal bracing. If it turns out to be necessary, it can pretty easily be added later. Its probably wise to make your front supports an inch or two lower than the rear support - to keep the boat from catching wind on the highway and hopefully improve gas mileage a bit.

I think the trailer was designed to haul a much heavier load than I’m using it for. I may try pulling one of the three leaves out of the leaf springs to give it a softer ride. I still need to add hasps to lock the boxes. Some reflective tape on the rear bars would improve night visibility and eventually I’ll put some enamel over the primer… I just wanted to get the superficial rust sanded out and sealed for the time being. I may make another long thin box that U-bolts to the tongue to transport paddles.

Still, its functional now and has made a couple long trips without problems. That included some pretty rugged roads at Arkansas boat landings with a full load of gear and boats, St. Louis traffic, and a couple 10 hr round trips to L. Superior. It works and works safely…

Hope this is of some assistance in your project.

And I’d suggest it’s better to carry a canoe by the gunwales, if for no other reason than to keep rain out of it. Just my $0.02 worth on that. I’m sure there are reasonable people who do otherwise.

Ppine, your advice on rolling gives me some insight into how I should design the trailer. Thanks.

PJC, I like that picture, and thanks for the advice that came with it. I may end up doing something similar if I design the trailer to haul two canoes, not just one. I’m leaning toward making it a one hauler, but making sure that it’s designed to fit both this canoe and my smaller one.

I bought this canoe with three other people in mind: my dad, my 9 year old, and my 11 year old. Trips will involve one or two of the above. My kids will soon be able to help with loading (the oldest probably is), and dad will eventually be less able. The “easy for one person” comment was with worst case scenarios in mind, not regular practice.

Here’s a couple more pics I found online when I was building mine. 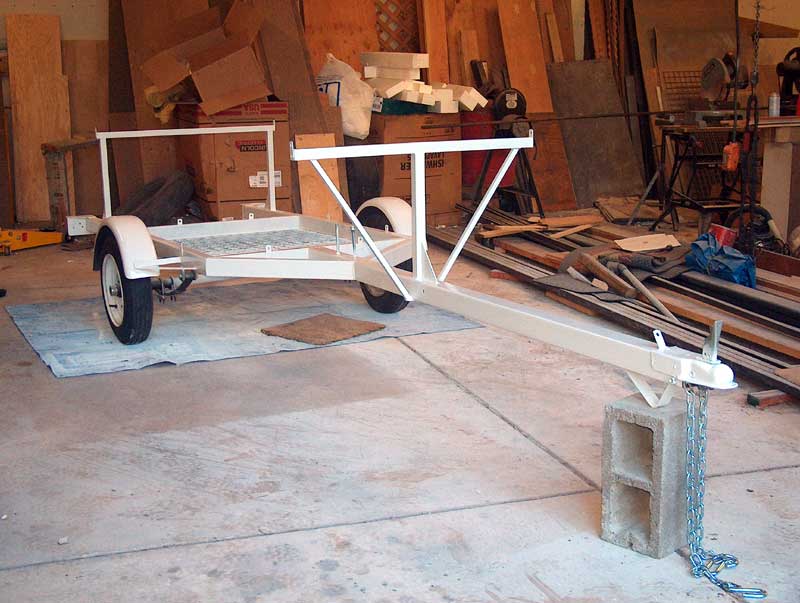 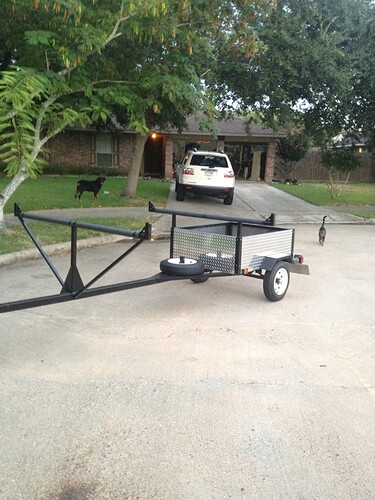 A lot depends on what trailer you can find to build on. I agree with Mike931x that bending over to load a boat is harder than cartopping with any canoe. I only went with a trailer because my car didn’t really have enough “top” for it to work safely (IMO).
If hunting is a priority, there might be some value in hauling the canoe upright, and building the trailer to accommodate that. (You’ll need to get the deer home, too.) In that case, a couple carpet-covered 2X6s mounted on an angle to cradle the boat (and securely cam-strapped) might be a good way to go, depending on the style of the trailer you end up working with. The boat could be tarped to help keep rain out. I’ve done that with small fishing boats - but make darned good and sure that tarp can be very well secured. A tarp flying off at highway speeds could be as, or more, dangerous to other drivers than a boat coming off. A nightmare scenario.
If you think you might be doing trips with other paddlers and their boat, having the capacity to carry an extra boat is useful when running shuttles and not very hard to build in. Just a thought…

The basic design of those last two photos mike931x put up look very user friendly, as does his original rig, and something that could be done with nearly any utility trailer of adequate size, I’d think. That basic idea has a lot to recommend it.
I’d be a little worried about that front support vibrating, though - perhaps I’m just a little “spooked” by my vibration experiences. But surely there can be some flex and twist expected in a tongue as long as necessary for carrying boats of the length we’re considering here… I’d be a bit worried about that front support “chafing” the gunwales, but with an Al canoe maybe its not an issue. I guess a groove the size of the crossbar could be cut in a 2X4 and U-bolted to the cross bars to absorb any chafing that might occur…

Mike, I disagree, respectfully, gently. I own two 20’ canoes and my little one is an 18.5 Alumincraft intended for the BWCA. The 20’ s can and are portaged, but not far. You are quite correct, they can be heavy. My use of them, and why they suit me perfectly. First, I am a large human, 6’4, size 15 shoes and nudging 300 pounds.
The intended use of the canoe is extremely long river travel, and white water. I have several times been 6 weeks between resupply points. I routinely carry calories sufficient for two for four weeks or more. Total loading is between 600 and 800 pounds, including man, boat, all gear and food and water. Load capacity of the boat is 1800 pounds. Annnnddd, When I travel white water, I want a boat that floats high and light, that responds quickly to the rise of the next wave train or open water wave. I make jokes about needing only wet grass to float the boat. I paddle from the stern seat on flat water, and shift forward onto my knees for anything Class II or better. Both 20 footers have 3 inches of rocker, they turn easily and can still track very straight. A 20 footer as an unloaded, unballasted boat is much too big on any kind of wind, I agree with you completely in that case. 20 footers certainly have their uses. Our only disagreement would be in the “100% bought the wrong boat.” Mine is perfect for what I do. The usual 17 footer, in my case, would be wet and swamped day after day after day. By contrast, my usual ‘bailer’ is a large tile sponge. I mop up the 1/4 inch of water and clean the muddy tracks out of the boat at the same time. I squeeze it over the side. I call it ‘housekeeping’.

Can a f450 haul a bucket of rocks? Sure. Is it the right tool for the job? Nope.

I am 6’5" 210lbs and have solo’d an 85 lb canoe on some long trips. It was terrible doing portages a d loading/unloading, but it is what I had. Certainly wasn’t the best boat for the application