So I just bought an ascend 12t for fishing small lakes, creeks, rivers etc. This is my first kayak and am excited to try it out… after getting it home last night, I realized it is nearly impossible to get it up the stairs to my second story apartment because of the odd angle of the landings on my buildings stairs. I am storing this on my outdoor balcony. Any advice on hoisting it from the ground below up to my balcony? This will need to be a 1 man job

What’s above your balcony?

You could make this very elaborate, but the simplest solution that comes to mind for me at the moment would be a long length of 1/4" rope (a bit more than twice the lifting distance) and a single pulley (and make sure the pulley is fairly good quality). Tie one end of the rope to the railing, run the rope through the pulley which is attached to the boat, and run the other end up to the balcony, where you will be when pulling upward on that end (this describes the routing of the rope, but the actual way you will set it up is to thread the pulley ahead of time, and lower it down to where your boat is waiting on the ground).

Attach the pulley to your boat. A double-loop rope sling that wraps around the hull on both sides of the seat area will be good if you want to be able to grab the boat at the mid section once it’s lifted. Attaching the pulley to one end may be fine, though. Try different ways and see what you like.

When you stand on the balcony and pull upward on the free end of the rope, you’ll be lifting half the boat’s weight, which should be fairly easy. Still, it will be best to keep the free end of the rope wrapped once around the railing as a safety stop so that you can’t accidentally let go or slip with the result being a dropped boat. Lift the rope with one hand and take up the slack at the railing wrap with the other hand (reverse that process when lowering).

Once the boat is as a few feet from the top, tie off the free end, and lift it by hand over the railing. Do not hoist it all the way up to the railing or you likely won’t have enough slack to bring it in the rest of the way.

It was a lot harder to describe this than it will be for you to do it.

If he has something to put pulley on above. If he rents they may not want that set up due to liability.

How high is the top rail of your balcony from the ground?

There’s nothing above the balcony as I’m on the top floor… my problem with hoisting the way guideboatguy explained is, I am in the corner apartment so I have a balcony directly in front of me and one about 45 degrees off to my left which would make lifting the boat any way other than attaching to one end and pulling it straight up impossible because it would hit one of the floors of the other balconies. The issue with pulling straight up is, once I get it to the railing, I feel like it would be too heavy to swing the bottom end over.

In that case, perhaps lifting by one end is fine. If you can physically lift the weight of the boat, you can probably get it over the railing. It may be a matter of learning your technique and gaining confidence. A bathmat draped over the railing to function as a padded slider will probably make it easier.

Otherwise, maybe there’s some option for outdoor storage that you can come up with. When I was young and lived in apartments, I often had a boat stored outside on the property somewhere.

Lifting the weight of the boat from ground to balcony would be no problem, my issue comes when I get the front end over the balcony railing then have to swing the bottom end up and over. I just think it would be way too heavy for that and being that my balcony is about 25 ft off the ground, I’d hate for my first go at that to be the end of my kayak.

Don’t do it with the landlord around no matter how you do it.

PS…what do you think the other tenants will think of you pulling up a kayak over their new gas grill on the first floor every weekend?

Let guy on bottom floor use it and leave it there.

I once owned a three-story house built on a hill, and I set up a pulley system for the groceries.

Yay, I just found a photo: 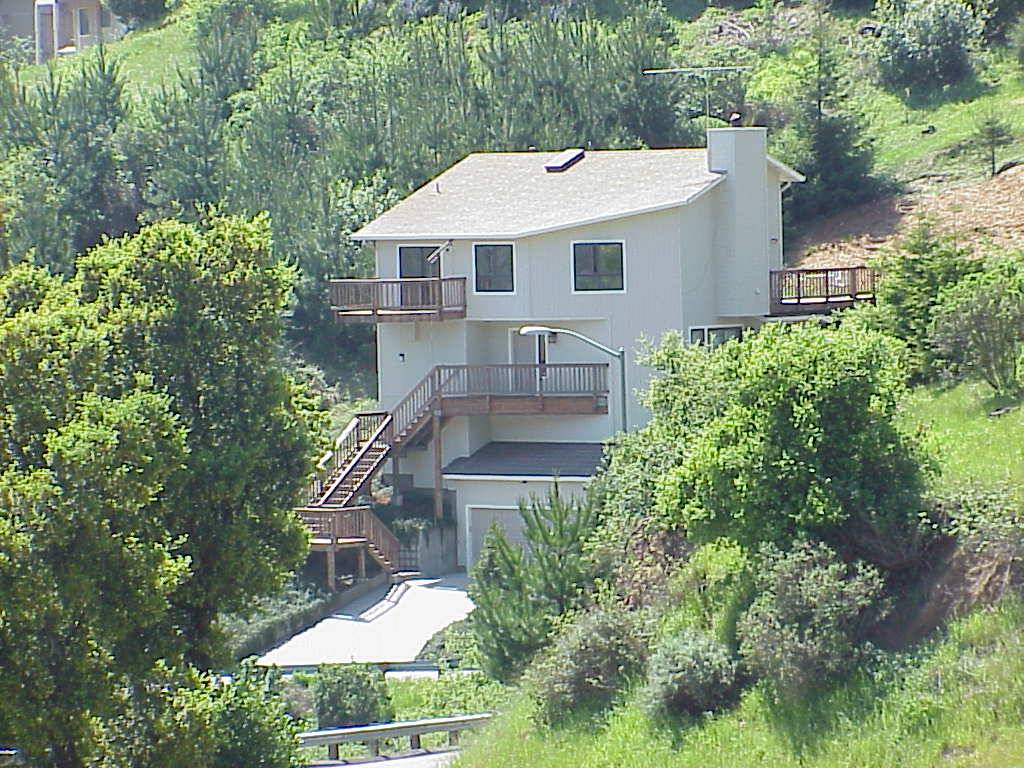 It has a support that goes to the deck that isn’t clear.

In any case, if you can make something similar, you could perhaps get the cockpit up to railing height and flip it.

Also, I assume you’ve tried all ways to get it up the stairs.

Inflatable and folding kayaks are the handier choice for apartment living (which is why they have long been popular in Europe and Asia). You might want to think about that for your next boat. Since they can be mailed in a carton, you don’t have to buy one from a local dealer.

A 12.5 ft folding Pakboat Puffin Saco only weighs 20 lbs, (nearly a quarter of what your 77 pound plastic Ascend weighs). It sets up in 15-20 minutes and can be stashed in a closet or car trunk. Since it’s so much lighter and somewhat flexible, it might fit up the stairs too. $400 more (than an Ascend) to buy new, but a whole lot easier to transport and store. You can even take the packed kayak on an airline on vacation. I bought a used one 6 years ago for $500.

I lived in Kirkland WA (near Seattle) for about 10 years.
The whole time in apartments, the whole time had kayak ‘stored’ on rack on car roof.
never any problems
For couple of years living here in Jacksonville, FL, lived in an apartment with kayak stored on car.
It was stolen, then recovered a few days later (buried in ‘leaves’ by the river bank - apparently taken by local kids).

I was working in Memborne Florida. The RV park had a rule “no boats” at the site. Seems the “Seasonals” were a problem with this. So my yak spent a lot of time on the truck. They finally relented and put up with me storing it beside the rig. I left before the seasonals arrived.