I rarely say ‘its too big’. People call me crazy on a day I just consider ‘good fun’. But yesterday…yesterday was something else. I’ve paddled many time in conditions close to this, but I just got a GoPro and wanted to record a couple-times-a-year wind/wave event. Sunday was 8’ and 20kts and a rippin good time. Monday was a whole nother’ beast.

I would have paddled more yesterday but the wind direction of NW/NNW meant being blown quickly into a line of jetties which didnt sound fun, the wind was blowing me away from the harbor entrance, and upwind progress was very hard and slow, even at full effort. If I was not dead parallel to the wind the bow of my boat would get blown 30* south every time I crested a 12 footer.

Normally the strong winds are from the west so the risk of being blown into rocks is low. Fun times though. I was leaning into the wind at 15 or more degrees just to keep myself centered.

One thing I have never seen before - the top 4 feet of a wave break in open water. I have had 2 feet of wave break on me a mile off shore many times, but never 3 or 4 feet. At that point its almost like being hit by shorebreak! The wind was so strong the waves were near critical, everywhere, all the time. Any time a set overlapped or ran into an out-flowing current, it provided just enough more energy to cause the waves to violently break in open water.

I’m still working out the gopro positioning and forgot the RainX, so forgive the water droplets and occasional down angle.

Before you all call me crazy, I have done this many times, know the area well, limited my exposure, and had several layers of backup plans. I do not recommend anyone but expert level paddlers attempt anything similar. That said, I love an angry ocean and few get to witness such power up close. Its truly amazing.

Closest Buoy to me CDIP summary 203 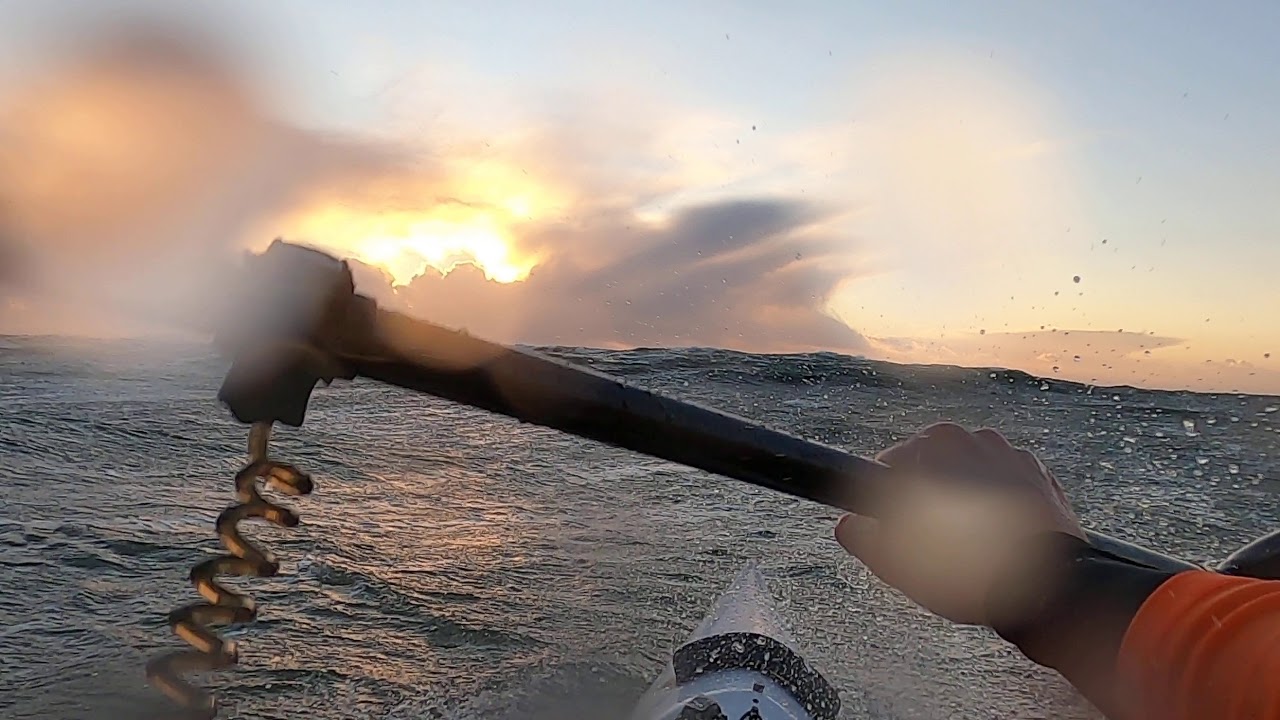 Awesome! Great written overview and video. You had the experience to handle the initial conditions, wisdom to assess them, and after “sticking your toe in the water” decide it’s better to return to port and paddle another day.

That was sporting. Thanks for taking me along.
I normally find skinny boat videos boring but that was fun.
Thanks for posting!

That’s some mighty fine paddling, especially as video never truly shows the height of the waves.

Love your elation - thanks for a fun trip!

My neighbors weather station was showing 55 mph winds. Scripps Nearshore buoy was 15’, the outer row of waves you can see in this picture are ~ 15 ft faces, nobody out as waves were breaking from the wind way out off the coast. 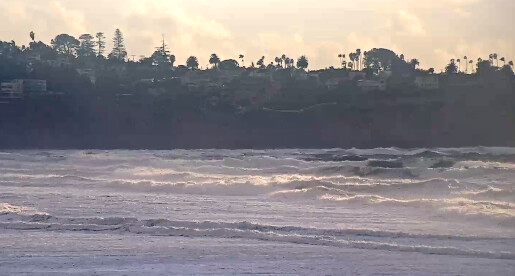 That’s some scary s&%$ there, makes me glad I have a river. Can you get back on in seas like that or are we talking a bit of a swim?

The gulls thought there was dead meat on tap! But, as the heaving motion got bigger and bigger—very noticeable in just a few minutes—even they disappeared!

Thanks for sharing the video and written details. 1 kt forward progress against that wind; hey, at least it was forward.

@3meterswell I thought you would like this one. I’ve seen a couple videos or trip reports from you and it looks like this is familiar territory

@SeaDart That looks even worse than what we had! We had big groundswell to absorb some of the wind waves. That picture looks like waves at 3-5 seconds with minimal underlying groundswell.

@Kevburg Ya, remounting when its really really big is actually not the worst. The massive swell flattens out some of the smaller but steeper wind waves. Also the large swell has a long enough period (typically 10 seconds+) you can remount in between waves.

The toughest conditions to remount are short period wind waves of large size, like 4-5 feet at 5-7 seconds. Those waves are steep and close together, leaving little time to get situated before the next one hits. Also clapoitis (reflected waves or ‘haystacks’) make remount difficult.

I would never paddle in conditions I could not remount in, and in general would recommend the same to anyone on big water.

On Monday failing to remount was not an option. Taking an extended swim would have turned out very, very poorly due to the wind direction and currents.
I practice pretty much every time im out and have swam in similar but slightly smaller conditions intentionally and unintentionally.

Luckily as you can see, the Swordfish S is an excellent rough water boat. It has loads of secondary stability that is extremely reassuring when its rough. It is properly rockered and has a shallow V front section of hull which almost eliminates bow slap. Fenn is a South African company and they have 10’+ swell all year. This boat was made for stuff like this, which helps a lot. Even compared to other brands of surfski, I would take a Fenn over anyone except the new Kai Bartlett boats, the Ozone manufactured Vega and Vega Flex (and it makes sense since kai is a lifelong Hawaiian and knows his way around a 12’ wave)

And I have pretty good balance/train for days like this regularly by seeking out the worst conditions I can find most of the year. I live for 8’ 20kt days.

@pikabike Lol. there were like 1000 gulls and pelicans just inside the harbor entrance. Normally they hang out on the breakwall but the waves were topping it so they moved in. As I paddled back I went right through the middle of their flock. I felt like moses with a 15’ bubble around me ‘parting the sea(gulls)’. They would take 2 flaps, hover 10’ overhead, then land a moment later, with ~100 in the air at any time. I was just thinking ‘dont poop on me!’

Literally a case of the sht hitting the fan if those birds had pooped.

I love how the speed on the downwind part is so pronounced relative to the grind against it. Otherwise, why do it at all, I guess!

Pretty “busy” water. Gotta pay attention in stuff like that. If you were only able to make 1 KT in that Swordfish S I would have been going backwards. When the tops were breaking on some of those larger waves started falling apart it was pretty impressive. I had a visceral reaction to the whole of that video.

Its happened before, thus my fear

Ya, the speed difference is quite apparent and that was even a bad downwind. I mean the wind was strong but the wrong direction and the waves were far from ideal shape. Now that I have a gopro I’ll try to find at least 1 good day to record the Goleta state beach to Santa Barbara harbor downwind. That’s a fun 10 miles when the wind is blowing hard from the west and gets perfect 4-5ft at 7-9 second conditions a few times a year.

Right as i got to the harbor mouth a standout crumbled a couple hundred yards out. I could tell the wave was over 12’ and the top 1/3 of it fell apart. I’ve never seen that much water break off shore. It provided a sober perspective to begin the paddle and constrained my plans for the day.
I’d be somewhat ok getting hit with that 1/2 mile off shore and having plenty of time to recover but not nearshore. By the time the boat would stop being pulled along I would have been in a very bad spot if I got caught inside by one of those.
Im not in the best shape right now (only paddling on the weekends due to lack of light) so its not as telling, but yes, forward progress was basically impossible.
I have a new respect for being caught on the wrong side of a squall or unexpected front. No way an average person is making meaningful progress in winds over 20, and likely less than that. Thus, always paddle up wind first!

Another fun night tonight. Today was manageable with 15-25kts wind and 3-8ft seas. It was still crazy though, there was a lot of reflected swell and small swell coming from the south and northeast in addition to the big swell coming from the SW, W, and WNW. I was out enjoying it for about 90 minutes

I paddled about a mile out and then went downwind. after that I paddled back out to about the same spot and did one intentional practice remount to begin the video, then while I was getting situated I fell over (this time on the leeward side) and guess ill do a 2nd one.

On my way back in the harbor partol asked me if I saw anyone out there. I just googled it and 2 ladies were overdue and called in as missing. it made the news below…
Edit - a local paddler told me the girls in fact did not need or recieve rescue. A person was at the beach when they launched and after they did not see them return after a couple hours they called them in. They completed their downwind run and made it to the intended destination fine. Nice that people are watching out for each other, but make sure there are actually people who need rescue! Not a great day for the CG to be flying if they didnt need to

Here’s how it was (if it shows up as a blank link just click it, the youtube link doesnt seem to be cached yet) 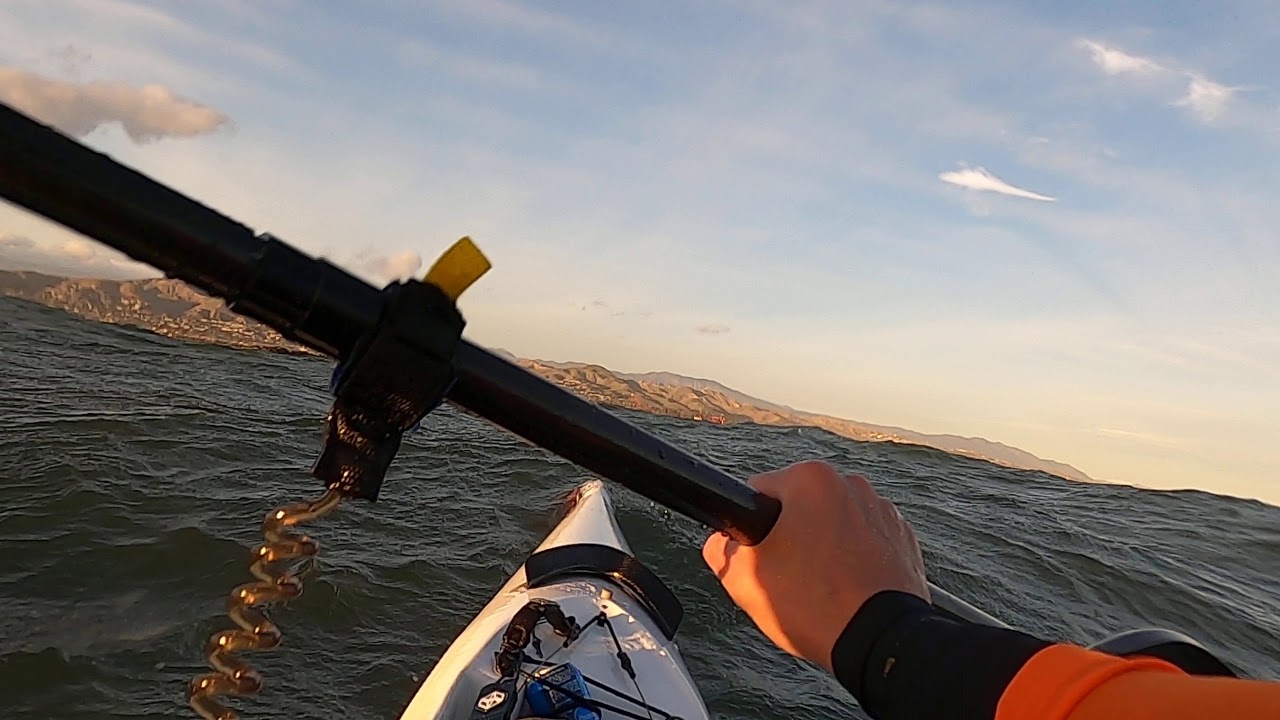 According to officials, two women in kayaks were reported missing while out on the water Saturday around 3 p.m.

Crazy conditions you enjoy. Eight foot seas are way beyond my skill set or desires.

Checked your area news and learned those gals were found and rescued. That’s a good thing.

Yeah. Messy. Thanks for posting. That was fun…

The ocean plays for keeps and so do big lakes with a lot of fetch. Bracing is your best friend. I found sea kayaks to be very seaworthy with a cockpit cover out on Pyramid Lake, NV when it was rough. The one set of conditions when they are better than a canoe. The waves were 4 feet, but steep and close together compared to larger ocean swells. When you disappear in the troughs and can’t see out you know it is starting to get rough.

Fifty years ago I felt the power of the ocean on a really big day of surfing at Huntington Beach, CA. The biggest of my life. On the news they said the surf was 10-12 feet. I remember it like it was yesterday.