I’m thinking about purchasing a used MIchi-Craft canoe. The owner has little info about it though, but believes its a 16’ from early 80’s (maybe 1982) and its made of Royalex. Did Michi-Craft make canoes of Royalex? I know that now they are made of Alumninum and can find very little info about older Michi Craft canoes made of Royalex. I called the company that makes Michi-Craft canoes (Meyers Boats), but they bought out Michi-Craft in 1993 and have no info on canoes before that time. They suggested that I look into info on Blue Hole canoes, but that went no where as well. There was another post here (https://forums.paddling.com/discussion/2937130/michi-craft-canoe-info of someone thinking about purchasing a 80’s Michi-craft and thought it was made of fibreglass. Others posters indicated that they thought it was made of Royalex. 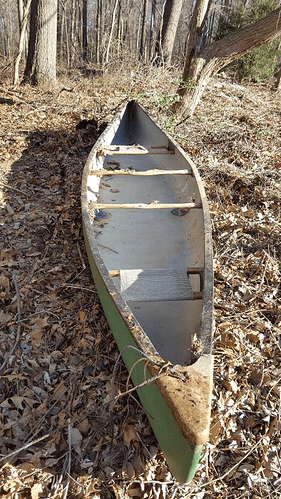 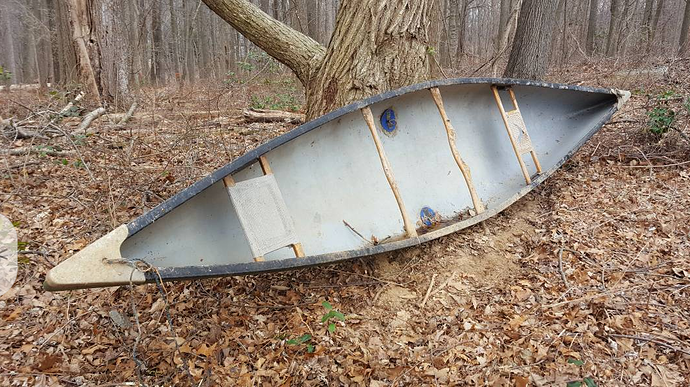 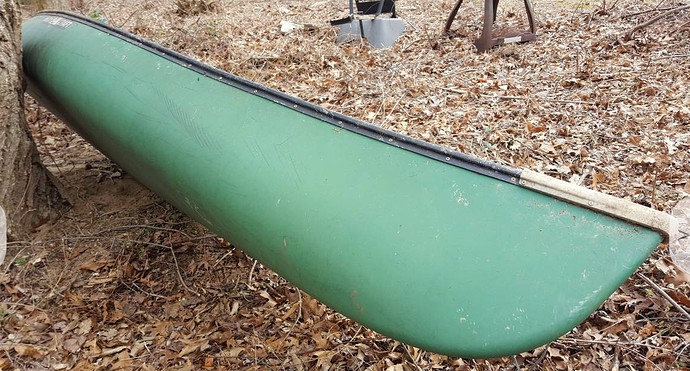 1151×619 1.22 MB
. They do have one new seat that has not yet been installed that they would throw in for free. What should I be concerned about when purchasing a used Royalex (if thats what it is) canoe?.

In any event, I’d like to use it on a large reservoir lake. The lake only allows electric engines to be used canoes (not kayaks). Do you think this would make a decent fishing canoe once I put in some stadium seats and a electric motor?

TIA for any advice or info you may have on “old school” Michi Craft canoes.

I don’t see any keel in the photos ? If you’re going to be using it on a big lake, you might want to consider a canoe with a keel for better stability in windy conditions. Just an FYI.

Keels have nothing to do with tracking or stability; but that belief persists… The chief run away from it reason is it seems to have been stored outside. It looks like it could be Royalex. That can get very brittle with age and UV exposure. I don’t know how thick the RX is. Some Old Towns from the early 80s were made with a very thick RX and are still bombproof
ALL the wood needs to replaced. What is hinted at in the photos is end rot of each thwart and the yoke… This is something you do not want to fail in the middle of the lake.
I’d never pay 450 for a 35 year old canoe if indeed it is 35 years. That the seller is clueless about the age is not helpful… It should have a HIN stamped or on a plate in the stern outside. The last two numbers are the year.

Thanks for your response. Yes, the serial number suggest that the canoe is from '82. I have read, as you mentioned above, that earlier RX models used much thicker RX sheets than later models suggesting that they have a much longer shelf life to them. Due to my concerns with the canoe, I have responded with a lower price. If the seller bites, any idea how to note if the RX has become brittle? As mentioned, I’d be lake fishing so I’m not expecting rocky boating adventures which would be seen during river trips.

I’m assuming if the thwart and yolk do need to be replaced it would cost about $100. They are pretty local so there’s no skin off my back to take a look, but as you have mentioned, I have concerns…

I’m thinking the canoe probably weighs between 55-65lbs (I believe OT Penobscot 16’ RX boats are 58lbs). with a weight capacity of at least 750lbs. Does that sound right? Hopefully I’ll be able to find a model number stamped somewhere on the canoe. I’m surprised I can’t find anything on the net regarding old school 80’s MichiCraft RX canoes.

Beware capacity… That is to the six inch freeboard line and by loading that heavy you are paddling a log. There is nothing magical about capacity. Its the weight of the water displaced by the volume of the boat when submerged to the six inch above water line. Manufacturers sometimes make their “capacity” seem magical but its the same for every boat of the same volume whether made by an expert or Tweedle Dum… I’d not put more than 500 in it. That is a full tripping load for two for ten days!
Its hard to discern models from numbers stamped on a canoe. Most of the time there is no correlation.

Now when you go. look at the inside. Is it pebbly? That indicates polyethylene. Turn it over to make sure it has a shape that is not lower in the middle ( that is bad). Does it look like shards of something or a weave? That is fiberglass. Is it smooth of one color. That is Royalex.
I’d probably be a rotten real estate agent but I’d start at 275 and stare at it… Say nothing… let the seller make the next move.

“Keels have nothing to do with tracking or stability, but the belief persists.” That statement contradicts everything that canoe manufacturers say about white-water canoes, that absolutely should NOT have a keel. The belief persists because of experience, not opinions.

Um faulty reasoning… WW canoes should not have a keel because it gets hung up… Flatwater canoes properly designed and constructed and not dragged on shore do not need a keel… I dont have an opinion because I want to be right… Talk in person to John Winters and David Yost. I have.

Your reasoning is an example of false premise.