A Christmas Story - and Its True!

Yes folks, it’s that time of year again - time for tall tales and pictures of Santa Claus. Well here’s mine, and it’s an oldie but a goodie. You’re probably not going to believe it, but it’s true. I saw Santa, and he was not in a sleigh being pulled by reindeer. He was in a canoe - a red canoe. Here’s what happened.

It was Christmas Eve a couple of years ago. I had finished all my shopping so I decided to take my canoe out for a short trip. As I was unloading my gear, I looked downstream and saw what appeared to be a man in a red suit poling up the river. 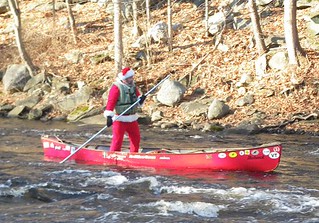 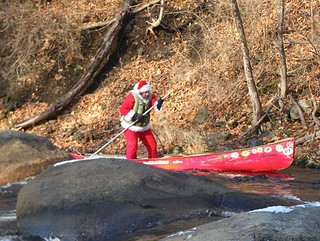 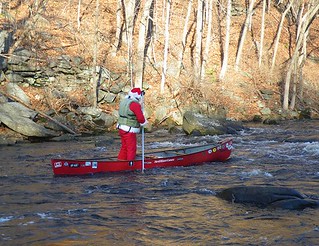 I decided to follow him. Eventually, he pulled off the river where a small group had gathered. Curiosity got the best of me, so I pulled my boat up on to shore and walked over to talk to them. I learned that the man in the red suit was Santa Claus, and the small group that had gather by the river were his elves. 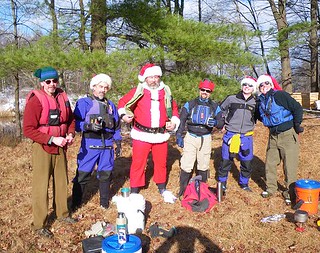 I also learned that much of what I thought I knew about Santa was wrong.


When he was ready to leave, he offered us some Sailor Jerry. 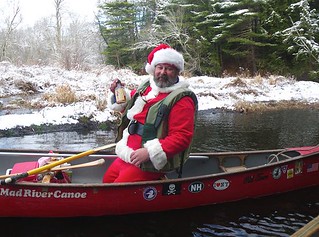 Then he headed off to begin his night’s work. 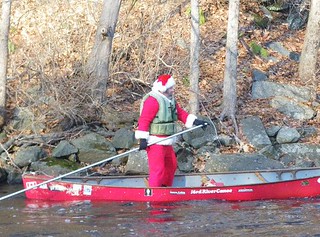 I know it s amazing, but its true - pictures don’t lie!

Old-timers here may recognize Wickerbut as Santa, and TommyC1 and Riverstrider in his band of elves. 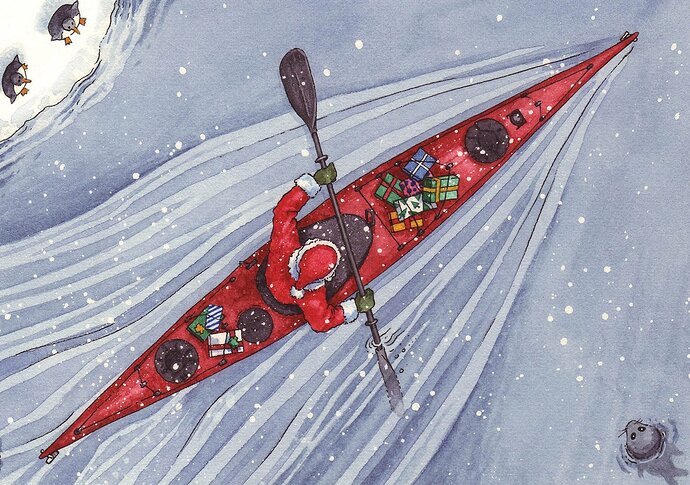 Third, Santa’s favorite drink isn’t hot cocoa – it’s Sailor Jerry. He says that it does a better job of keeping him warm on those cold December nights.

It’ll make your clothes fall off
but not shoot-out your eye,
like that Red Ryder Rum
of some other Santa guy,

and if a nearly naked Santa
frightens poled up on night’s rooftops,
how ho-ho ya gonna feel
when your chimneys stuffed with some Cyclops?

Signed,
Thomas Tew many and the Unshore Ocean Statesmen
(Is seeing double with four eyes known as an optiunlogical octet? Only your Santity Clause knows for sure. Your rum may vary. State taxes not included.)

Maybe for quick trips, but for the big night it is a red canoe or nothing - here is the “official” version.

T’was the night before Christmas, and out on the water,
Not a creature was stirring, not even an otter.

The dry bags were hung by the chimney with care,
In hopes that St. Nicholas would drop paddling stuff there.

The boaters were nestled all snug in their beds,
While visions of surf-waves danced in their heads.

And Mama in her pogies, and I in my cap,
Had just settled in for a long winter’s nap.

When out on the river there arose such a clatter,
I sprang from my bed to see what was the matter.

Away to the window I flew like a flash,
Tore open the curtains, and threw up the sash.

The moon on the water looked the whiteness of snow,
It shone like mid-day on the river below.

When what to my wondering eyes did appear,
But a big red canoe without a single reindeer.

With a little old paddler, so lively and quick,
I knew in a moment it must be St. Nick.

He ran the big rapids, the drops and the falls,
Then he whistled and shouted and I heard him call.

Off the river and into the air he did fly,
In a beautiful silhouette against the night sky.

More rapid than eagles to the housetop he flew,
The canoe full of gear and St. Nicholas too.

And then from the roof-top there came a great sound,
The sound of a canoe running aground.

As I grimaced at the noise thinking there must be a hole,
Down the chimney came St. Nick and he snapped up with a roll.

He was dressed in a drysuit from his head to his foot,
And the gortex was tarnished with ashes and soot.

A drybag of gear he had flung on his back,
And he looked like a paddler as he opened his pack.

But his eyes how they twinkled! His dimples how merry!
As he stopped for a swig of his Sailor Jerry.

He was a happy old paddler, a right jolly old elf,
And I laughed when I saw him in spite of myself.

He spoke not a word, but went straight to his work,
After filling the drybags he turned with a jerk.

Then laying a finger aside of his nose,
A brace he did do, and up the chimney he rose.

He sprang into his canoe and with a blow of his whistle,
He shot off the roof like water-borne missile.

But I heard him exclaim, as he paddled out of sight,
“Happy Christmas to all, and to all a good-night”.

(Based on a Kayaker’s Night Before Christmas by Terry Gowler, Mount Vernon, WA that was on this site for years…)

Is seeing double with four eyes known as an optiunlogical octet? Only your Santity Clause knows for sure.

I’ll have to chat with Santa