A critter stole one of my booties

Yesterday after paddling, I washed my neoprene booties and set them out to dry. They were sitting on a box right next to the front door overnight, as usual when leaving them out.

This morning I stepped out to find only one of them there, with its mate nowhere in sight!

We do have wildlife around, including mtn lion, bobcat, black bear, red fox, common gray fox, and assorted smaller critters too small to pick up a bootie. Mtn lion and bear don’t come near our buildings, and gray fox frequently comes by, often leaving a small fur-filled gift poop.

I can’t think of why a bobcat would take interest in a damp neoprene bootie, and it’s unlikely to come that close anyway.

That leaves red fox or gray fox as the likely culprit. Gray fox has been through here frequently all year, including countless other times when booties were out.

My bet is it was the bigger red fox, which not long ago walked right under the porch, past the same door.

The bad part is having to buy a new pair of booties during a time of gear shortages. Just placed an order which probably won’t get here for a week, which means that there’ll be two sessions wearing either too-small NRS low booties, or O’Neill 7mm high booties that will be too warm. Or maybe the one pair of Teva Protons left from when they were discontinued years ago—MESH summer low booties.

The choices are too small (the booties ran SHORT in length), too warm, or too cold. Oh, boy.

You could always buy a pair of neoprene socks. wear them inside a pair of crocks until in the kayak. When you wash them, hang them on the cloths line and the critters won’t reach them. They like to chew on chewy things…

My dog ran off with one of my girlfriend’s hiking boots a long time ago. We found it about 6 months later.

I think it was me. I just discovered I have an odd total number of paddling booties.

A varmint with a foot fetish.

good one! No one would steal my booties. Even Mirazymed!

If they are anything like my booties (smelly) a skunk may have taken it for a mate.

Ha ha, was it a blue and orange Kokatat Portage bootie?

My paddling shoes from yesterday reek and now we’re in for a week of rain and high humidity. Gonna have to rinse with bleach and stuff with newspaper.

My husband showed me some tracks from this morning or last night, on the hood of his vehicle. The critter must have walked from a puddle or the hood had dew on it, because the tracks were not great.

But they were enough to rule out raccoon or skunk or any of the animals I listed before. Based on the length, width, somewhat “handlike” separation of digits, and the nearby presence of poop that we had thought might be something that only occasionally comes around, our conclusion is…

It is a very cute critter, with huge, round, dark eyes and a face like a cross between a cat and a kit fox. Long, bushy, ringed tail that makes up about half its length. I bet it has triggered our MD lights and game cams at times, creating those mysterious night videos of absolutely nothing we can see, and no wind in the bushes.

Quite a few singles and/or pairs of boots or shoes turned up missing after kids left them “outside” their tent on some of the 100s of backpacking and canoeing outings I led.

They had been warned, but lots of kids have to learn the had way…

Never saw what took them, but raccoons, possum, fox, coyote, and stray hunting dogs are high on my list of “the usual suspects”.

Why do they take them ? My personal belief is perspiration; there is salt in perspiration, and those animals want the salt…

Or bigfoot may need to replace the last one/two he ripped off; because one or more are wearing out.
A 7 foot tall, 400 pound beast can create damage quickly.
Bigfoot’s (size 16 foot), leads me to believe he’s taking them to momma, or the kids.

Shoulda put em in the tent; seen it right off…

For the record, I’ve managed to avoid the booties getting stinky. Immediate washing with dish detergent, then putting out in our intensely sunny, dry environment helps ward off the stink. If I bring damp neo inside, it does develop the stink, so that’s why I keep stuff outdoors till they’re fully dried.

I guess the damp, springy chew of 3mm neoprene was irresistable to…something. There is no Labrador Retriever around here, if that’s what some of you are thinking.

My sister had a dog whose favorite food items were the denim furniture cover on one chair and any visitor’s shoes. I don’t suppose that raccoons are supposed to have any better taste.

This is the perp that stole my leather light meter case a second after I took this shot in the late 60s. Lost the light meter. 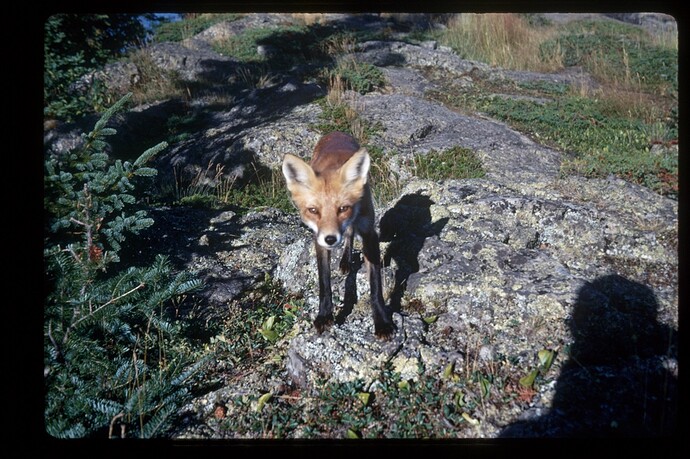 Qruiser often comes in with my shoe, sock, tee shirt, etc from the back yard and asks, “How many times have I told you not to leave your stuff in the back yard? (smirking)” We have retrievers that must … MUST…have something in their mouth. I suspect and frequently blame our own dogs, but left outside the feral cats or neighbor’s dog could be the criminals not just the wild things.

Apparently, the stinkier the better for dawgs.

Red fox is one suspect, though we see them less often than we do the little gray foxes. One of the grays is bold enough to jump on top of a tall cut stump and lap water from the dish we put out for birds.

Cacomixtle is still the prime suspect, though. The tracks marking the vehicle hood, the scat, the habitat, and the purely nocturnal life all match.

At our home, a wild critter is a much more likely culprit than any dog. Houses are far away, and what dogs used to roam are now gone (and good riddance to them). Also, whatever this critter was, it weighed very little, because no prints were in the gravel.

We see literally a hundredfold more wild animals than we do dogs or cats.

I took all my wet gear indoors tonight, just in case.

The best solution is to get a boot dryer and keep your booties indoors. There is no need to wash the boots unless they are dirty, just put them on the dryer and they will never stink. The Peet Dryer works great.

I recently bought a new pair of NRS wet shoes with the "Vaporloft insignia. They are a few more bucks, but they are worth it.

Second the boot dryer recommendation. Boot dryers are awesome! I have 2 of them (one “slow” one – heat but no fan, and one “fast” one with both heat and a fan.) Not just for neoprene boots but any footwear and gloves too. In slushy, rainy or sweaty weather (that covers most weather…) I use them constantly.