A little sunshine and the critters come out

Came across these today, identified by my expert brother-in-law as Non-venomous Northern Watersnakes. 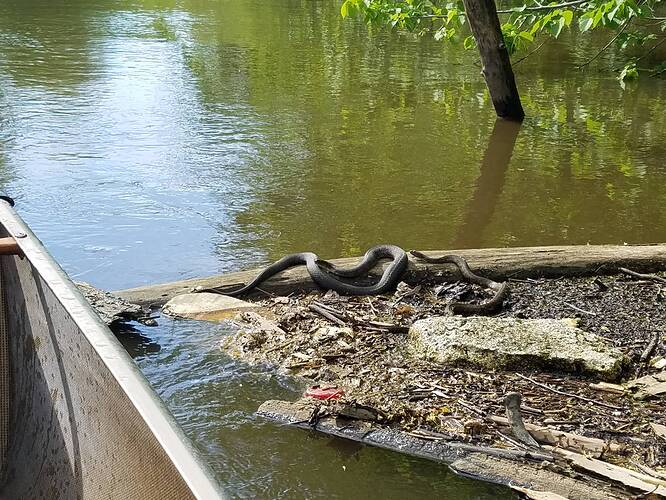 Also watched a woodchuck come right up the stairs from our backyard and start munching leaves 15 feet away from me, stretching for the good leaves, using his tail for balance and climbing around in a young tree looking like a little koala. Nice.

We may get storms again tonight but the long term weather forecast finally includes a lot of,sunshine. Yay!

We came home from a camping trip and 2 new shrubs I just planted were severely munched. Our dog was boarded because of the heat and the deer took advantage.
The snakes were mating, which is a real trick with no arms.

We were sitting in the trailer for afternoon respite from the heat. Outside at the next site a crow was opening a package of hot dogs at the neighbor’s site to get a bite, or three.

Carol and I were at the pond early the other day. I was checking on the water lilies String gave me last fall and the two that took are growing rapidly. We also hoped to see a pair of nesting Canadian Geese with goslings.

There was a pair of Canadian Geese nesting in a back corner of the pond earlier this year so I have stayed away as not to disturb them, Earlier in the year at the beaver dam on the spillway which I have to knock down periodically before the geese showed up I noted a opossum and skunk remains. I have seen a coyote there before and assume it had killed and feed on them.

Well the geese weren’t there anymore so as we sat in the shade I did a few goose calls vocally. There is another pond about a 1/2 mile away, and shortly after calling we heard a single goose call as it flew in from that direction. It called and called when it landed across the pond from us. We were sitting in the open and I called a couple of times with the goose watching me. It kept calling and swam to the back corner were I believe the nest had been. It would call off and on the 1 1/2 hours we were there, It sadden me to think it was probably calling for it’s lost mate, and that the local coyote may have killed it.

Tom, if you think woodchucks are “nice,” you’re obviously not a gardener!

But I have to admit, when they’re not eating all my plants down to nubbins, they are kind of cute.

I have seen it once coming into a persimmon tree last fall while hunting with my longbow, It crossed where I had walked in. I wear rubber boots to reduce the scent I leave, and yet an hour later it knew I had walked there and turned and left. I wouldn’t have shoot it anyway. They are not easy to shoot as they are very wary. I don’t resent the coyote it is just part of the balance, and a much more efficient hunter than I am. It’s just that listening to the goose calling in vain was such a sad thing to hear.

I like the yote better than the Canada Geese. We have more of a goose problem here.

So far, so do we . Coyotes tend to be solitary while geese arrive in droves. But, geese don’t eat fawns.

Geese don’t eat fawns.
Well, least not yet.
With everything koyaanisqatsi
perhaps it’s time for us to fret.
Coyotes on the comeback
but not as fast as all these deer,
which in turn are gettin’ buried
by guano everywhere geese round here
as these two eat all vegetation
off every field/lawn/cemetery
where soon who eats who meets you
if next to mom’s tombstone you tary.
And if the herd and flock are lacking
for their verdant leafy snacks
then how much longer will it be
before we’re in mixed ground and aerial attack?
So remember as you paddle,
next trip may be Tora Tora Tour
as all the Herbies switch to Carnys
and assault you with Circus Omni-ominous vore!

@Doggy Paddler said:
Tom, if you think woodchucks are “nice,” you’re obviously not a gardener!

But I have to admit, when they’re not eating all my plants down to nubbins, they are kind of cute.
My wife likes gardening but you are right, I am not a gardener. I am totally satisfied with the plants that nature has provided. I just took this pic of the backyard. I have no issue if our woodchucks want to invite all their friends over to eat every day as long as they don’t play loud bad music from the 80’s like the new neighbor down the road. 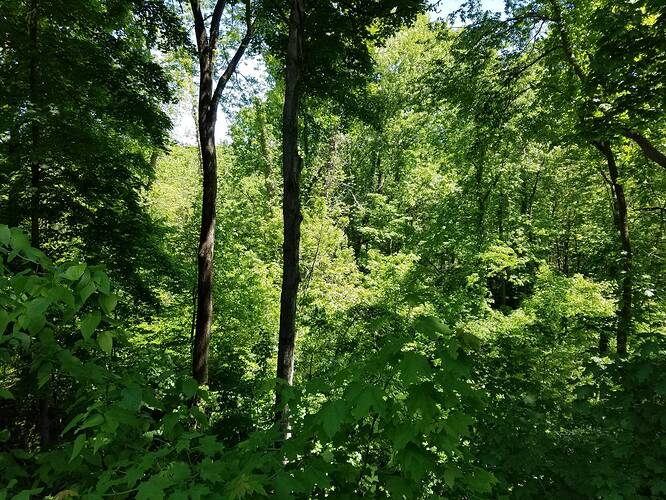