A memorable day on the river.

After having to cancel the trip 2 weeks ago, and not attempting it last week because of heavy rains and high water, we finally had our chance to paddle the Enoree River. This would be Kevin and Jimmy Ds first time on the river of muscadines. Enoree is the Native American name for this small river, and is said to translate to mean river of muscadines. We have a bumber crop of these wild grapes this year due to the frequent rains. Kevin was surprised to learn that muscadine vines don’t actually climb tress but ride up in the limbs as the tree grows, unlike poison ivy (and many other vines) which cling to the tree and eventually climb to the tree tops. Also due to the frequent flooding on this river with no dams there are numerous newly fallen trees in the river, and many of the old ones have been rearranged for our paddling pleasure!

We met at the always popular Bill and Fran’s restaurant, and picked up breakfast sandwiches to go. We had two cars and three boats. We transferred their two boats to my small Subaru Impreza to save some shuttle time. This was the first time I have had 3 boats on top of my car. Wish I had thought to take a photo. In 6 years I have seen one John boat of duck hunters near the mouth of the Enoree at the Broad river. I bragged that we wouldn’t see another boat on the river. So of course as we get down river latter in the day what do we see, but a local man and wife canoe camping on the side of the Enoree. He had caught 12 channel cats and planed to fry them for that evenings meal.

We managed to navigate all the wood in the water, but Kevin and Jimmy did make one dry portage on the land, and one wet portage through the trees in the shallows. As they portaged around on land, Kevin saw a snake move off in the weeds, and thought in might have been a copperhead, I would get out on the trunk of the tree/trees in the water and pull my canoe over the obstructions, and then remount my watery steed rather than portage.

Animal tracks on the banks were numerous, but the owners of the feet making them were not to be seen. We had a fair size critter hit the water with a big splash near shore but failed to see or ID it. We did see 2 turkeys fly across the river in front of us and the usual wood ducks, herons, and kingfishers. No eagles or osprey (which are a usual sight) made an appearance this trip.

It was a memorable day. We did about 10 miles of the Enoree, and 3 miles on the Broad River. Kevin brought me 2 long oars to put to use on one of my sail boats, and I gave him a PVC Native American flute, and a quick lesson in how to play it. I am making him a bamboo version very much like the one I gave to String 4 years ago. We are both well pleased with the exchange.

The Mud Puddle as String calls it. 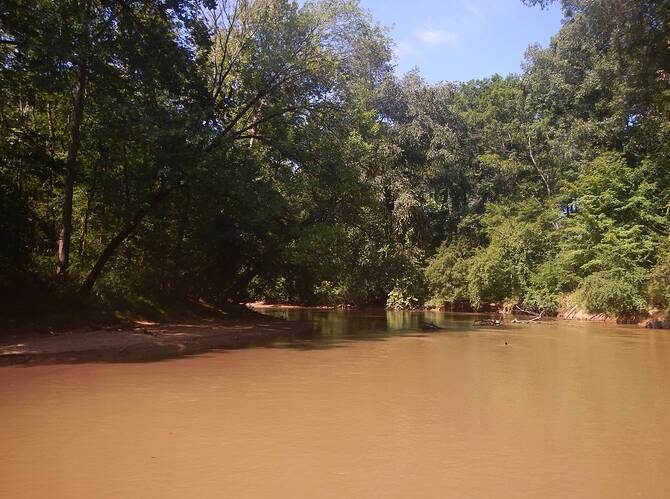 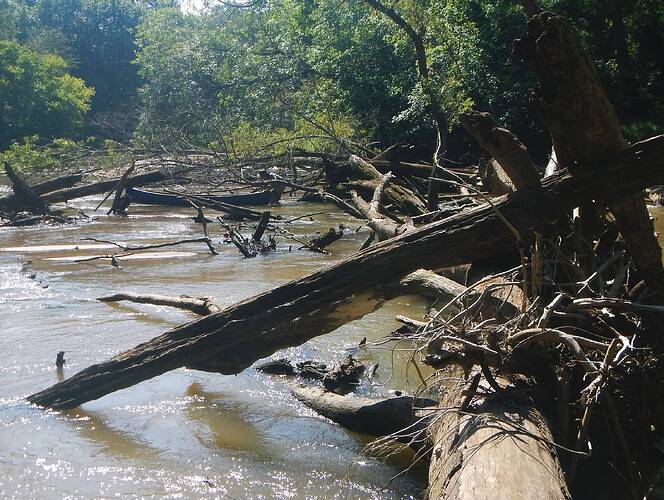 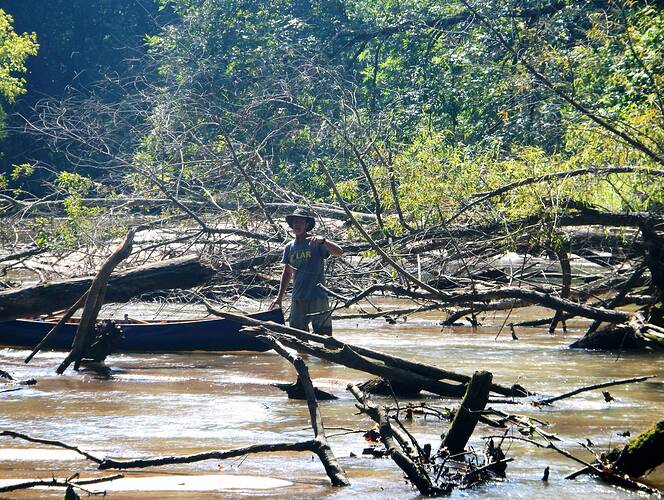 Preparing to climb the bank with boats. 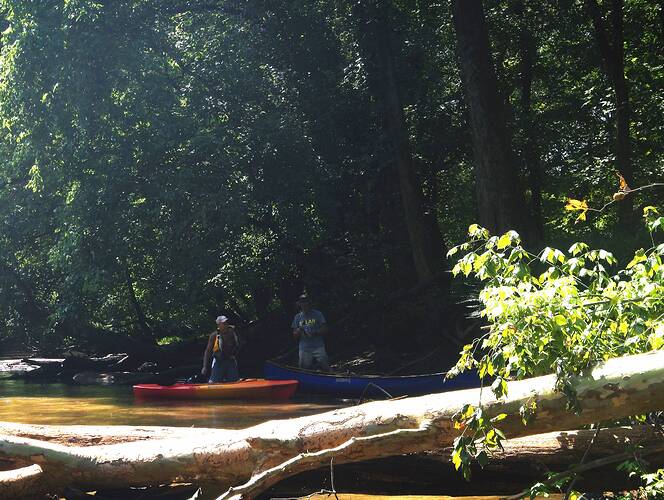 Wild Cleome on the bank at lunch break. 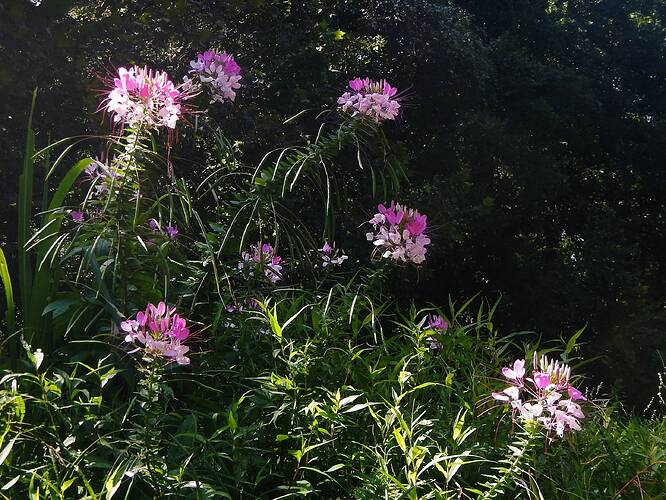 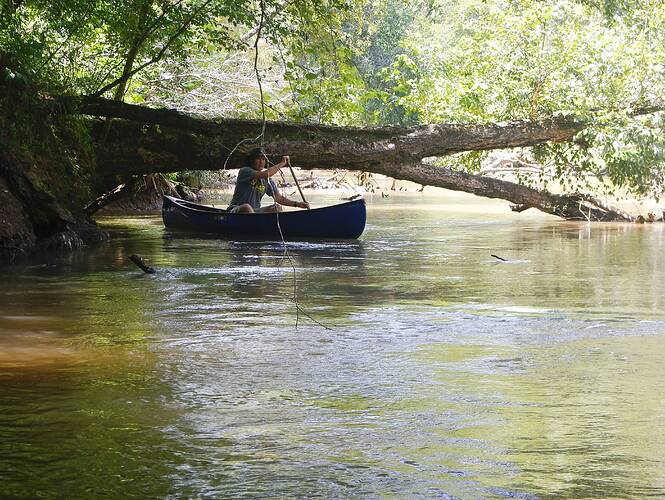 A fine pair of oars. 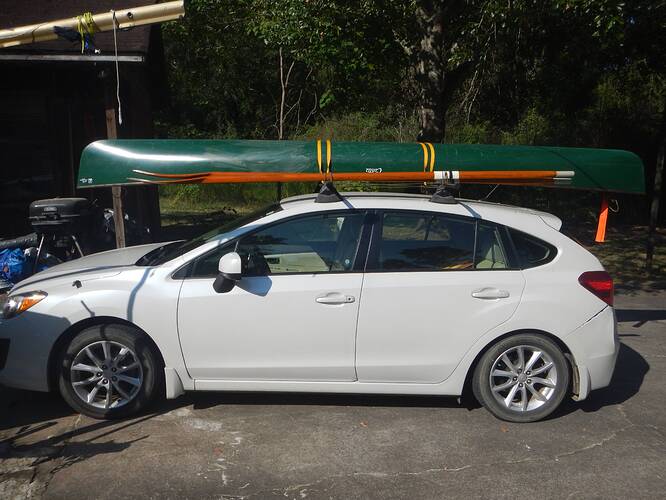 Two examples of my bamboo flutes.

Thank you for not inviting me.

I knew what this paddle would be like. Would you have joined us? I had no idea how many portages we might have to make, because of the recent flooding. It was pleasant weather, but I came home worn out. I must say i slept very soundly last night for a change. One of the things I enjoy beside the wildness of this little river, is how it tends to keep you focused on the water, and the uncertainty of what may lie ahead. In comparison the last miles on the wide Broad River which had slow flow is a bit boring.

It looks like a very nice river to paddle. I think I like anywhere that powerboats can’t access. Do you use a sail in your rowboat or just oars in your sailboat?

Oars in the sailboats.