A trip report, some pics and some lessons learned

The weather finally cooled down enough, and then got calm enough for a 2 nighter back at the Gulf Coast of TX with my CD Prana. It’s been a while.
I headed down to Goose Island State Park, did a couple of hours to get my sea legs back, then the next morning headed through Carlos Bay and Mesquite Bay and down the channel to the “real” Gulf coast and the beach. Next day (Monday) retraced my steps, or strokes. My GPS route (white) and tracks (blue) were… 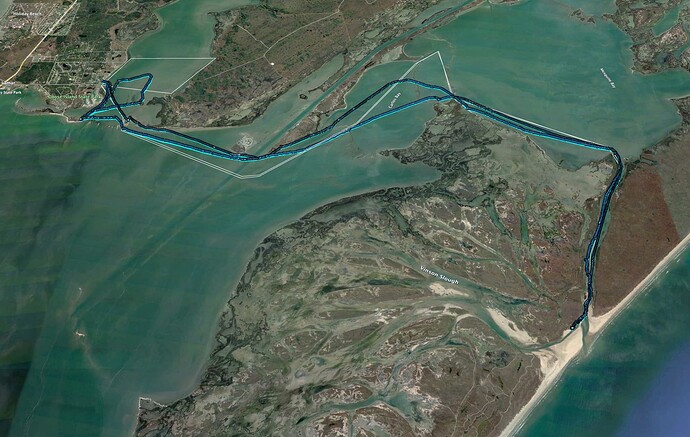 First, the good:
Sunday was just glorious. The water was so calm at times I had optical illusions, felt like I was paddling downhill. The horizon was invisible and distance very hard to gauge visually. 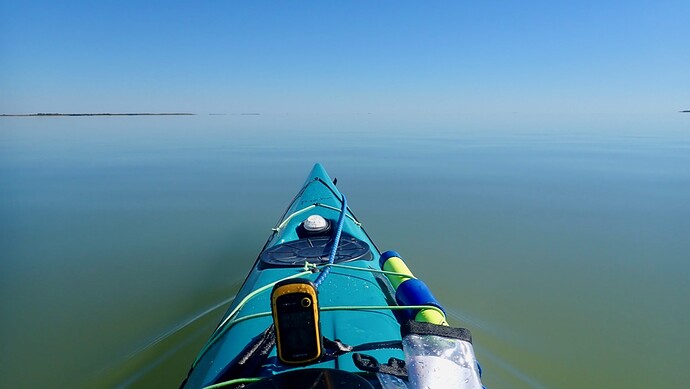 The only ripples were from boat wakes… 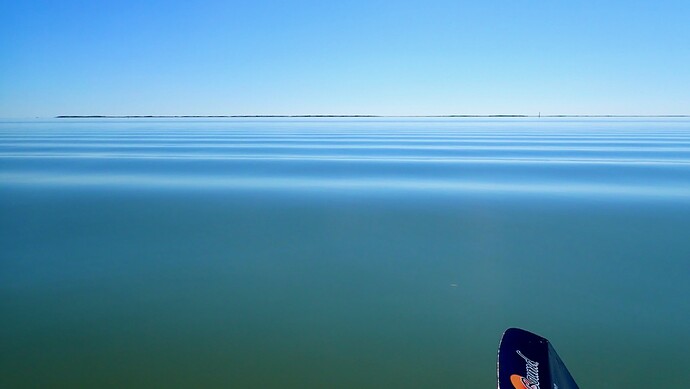 And the campsite was one of the best, tucked behind a dune, across a channel from the main beach (no idea what those 2 four wheelers were all about - nobody ever approached them and there is no access to this beach except by boat). 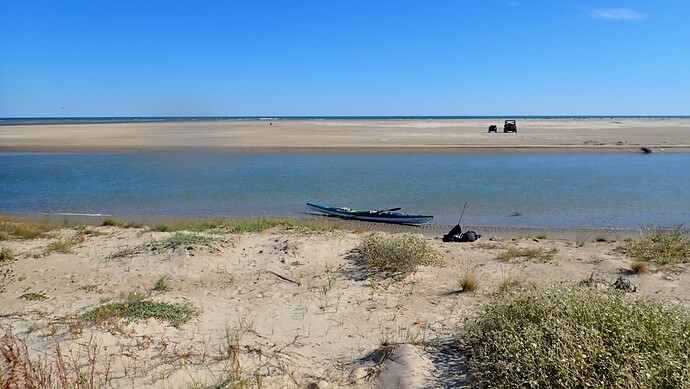 And thanks to inspiration from the “cooking on a canoe trip” thread, I at least made some bannock, which was a successful compliment to my cans of soup!

The bad:
Goose Island State Park is really just an RV Park and boat ramp. Camping in a tent there was not restful, even at 2, 3am there were cars coming and going, people partying. Eventually slept in the car. This has happened before. State Park = no sleep!

My planned routes were about 16 miles each day on the main trip. I took some shortcuts, but still, it was too much. I should know better - perhaps I can blame too much river time with a nice push from the current? It turned into a bit of an endurance test, especially on the way back on Monday.

Monday’s forecast had increasing winds in the afternoon. Knowing this, I was up before dawn (which is not really my idea of a relaxing trip), to catch a little lift from the tide and make sure I got back. I made great speed but it was not really relaxing, and indeed, by the end the winds, were up at 14, with gusts to about 22, with a weird looking line of clouds approaching. I wasn’t fearful, but was happy to get off the water. It was a good thing they were tailwinds, otherwise I’d have been struggling. I pay close attention to the weather (via Windy) but need to give myself more buffer - those winds can arrive early even compared to a very recent forecast.
I had a personal limit of 15mph for winds, but I need to think about that some more - not all winds are equal.

The ugly
The end of my homeward track has some “wanderings”. Firstly, I got into an oyster reef and stupidly reached down, resulting in a sliced thumb. Good news was that I got to use my first aid kit for the first time, and it now has macho blood stains on it.

Then, I got directionally confused (my GPS had a different boat ramp programmed) and “missed my turn”. This resulted in about 45 minutes of diversion, which normally would have been amusing, but this was when the winds were picking up quickly.

And some more good, so we’re not unhappy
My lovely boat was a dream, fast, easy to paddle and felt very reassuring when the wind picked up. 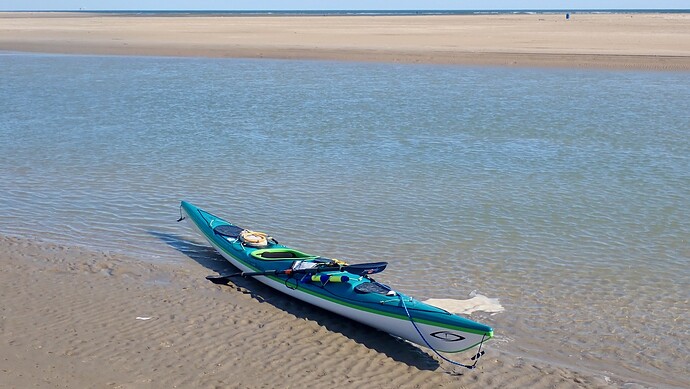 My new SOTO windmaster stove was a revelation. I’ve always used driftwood for fires before, but this was so easy (and tiny, and cheap). Helped me get underway quickly on Monday morning with tea and oatmeal in my belly.

Saw a big flock of Roseate Spoonbills - but didn’t get a picture.

Kept some beers cold via a double cooler and frozen bottles of water to keep me refreshed both evenings.

I’ll make some changes for the next trip!

In the offing the sea and sky were welded together without a joint, and in the luminous space . . . Joseph Conrad

Always interested in how to keep beer cold while kayak camping. Double cooler means cooler inside a cooler that was still small enough to fit through the hatch?

Hey Kevburg,
yep - I actually did some searches on the forum here. To be specific I went with a soft cooler inside a “semi soft” box style. Since I was with my vehicle the first night I left it all together, then on Sunday morning as I headed off for the beach night, I just took the soft cooler with two (still mostly) frozen bottles of water with me in the kayak.
I think the double cooler would still fit in the rear hatch if needed, but this worked well for me this time. I think part of they key is having the frozen bottles rather than just ice or those blue blocks.

Frozen bottles of water serve double duty as they can supply cold drinking water as they thaw. Always leave a bit of space in the bottles as water expands as it freezes.