This is probably too invasive, but I’ll toss the idea out there anyway. If I’m not mistaken the plastic used in this style of boat is ABS - the same family that black plumbing drain pipes are made of. In plumbing, these are joined by solvent welding, which dissolves a little of the surface in contact with another piece before solidifying together. You could attach an ABS plastic piece to your hull or deck the same way. Come to think of it, Gflex or some other adhesive might also do the trick.

@Rookie Now back to what the instructor meant… was he saying to try and put a toggle closer to the end (sounds like new holes or relying on plastic weld to me) or to replace the existing toggle with one that had more play to be grabbed by a rescuer and was a single line (just lose the bungie and replace with regular line)? I could see an argument for either but if it were my boat I would start with door number 2.

Frankly, this discussion seems like a lot of worry over basically nothing. The stock toggles seem to work fine as long as they can extend past the ends of the boat. The double line is not an issue, as the two sides are close together and under bungee tension, so they effectively act as a single line. It’s more of an issue with toggles on cord that goes through the hull, as the two sides of the cord are separated and a finger could inadvertently slip between them. If you’re really concerned about getting a finger between them, wrap the last 4" or so before the toggle with twine, tape or heat shrink tubing; that’s all you need. You may need to extend the length of the rope and I would also want something on to to prevent it from pulling through the fitting if the bungee breaks, but keeping the bungee will hold the toggles in place and keep them from banging around and driving you crazy while paddling.

Being able to easily grab the perimeter lines - even with gloves on - is much more critical to most rescues than end toggles. To make perimeter line easy to grab, then need to be raised off the deck. The simple way to do this is to install 3/4" wood beads on the lines. They’re available for a few bucks a bag at any craft store. I would also extend the lines to the end fittings.

On the noise issue, one of the advantages of monkey balls is that they are not plastic. They can bang around all day without making annoying noise. As to extending beyond the end of the boat, from photos it is unclear to me whether that is possible without having a line to the toggle that is actually too long unless stiffened by tape so it can’t easily wrap around fingers. I am back to my idea of Rookie putting the boat upside down and doing some in-person fishing around to see how things lie.

Personally I don’t like toggles. I’ve grabbed too many that broke off. Age and line failure. I also don’t like the way loose toggles hang over the side and beat the boat during car topping or drag water in waves. I put handles on the end of my boats. I’ve had one rescue in the last five years that I was the swimmer and we skipped the bow end T-rescue move. I’ve rescued and always seemed to grab the boat everywhere other than the bow first so I hand walked up the perimeter lines anyway. Rescuing and draining bow open rec boats has to be done from the center of the boat, awkwardly.

The boat in question has a toggle. It is just retracted. It was the instructor’s opinion. Use it or don’t.

You might be able to use the “stopper” aka fairlead as an anchor point and bungee back like the valley kayaks do. You might also remove the stopper and replace it with an eyestrap anchor from the sailboat hardware outfitter. If the holes line up. I’m thinking the manufacturer made that part strong enough to carry the boat from. 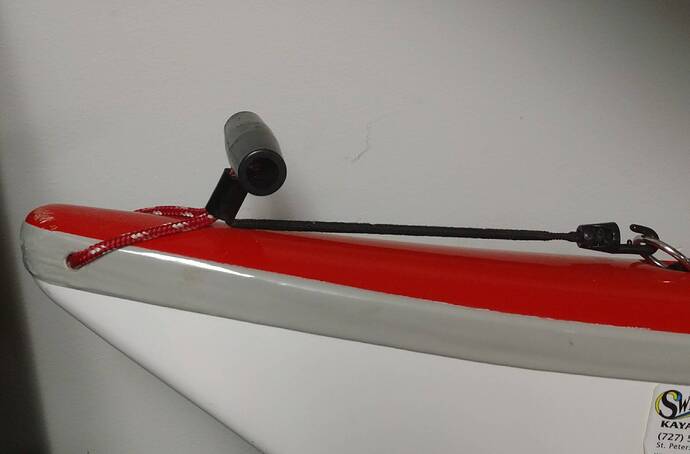 Note there is a pending failure I that bungee on the red boat near the hook. See the necked down section? Ah boat maintenance, a never ending story.

@Rookie said:
Perhaps Overstreet was looking at a different brand as all EDY touring kayaks have perimeter lines, albeit not the full length of the boat as on the now discontinued Raven. On the other hand, many CD kayaks don’t have full length static stern lines either.

I wasn’t looking at any one boat.

@Overstreet Rookie is trying to solve this on a boat that does not have a hole in the end, and is of a material that may not be friendly to putting one there. Valley does have their hole in the end,at least on mine, so it may not be a relevant configuration.

The “hole in the end” is the stopper.

Decided to go the KISS route and just re-rigged the existing setup. It looks the same, but a tug on the handle provides more line. Need to do an on-water test, but it’s been fog and rain here all day. Am considering carving a handle of minicell foam to replace the current plastic one. Noise insurance. Any downside? 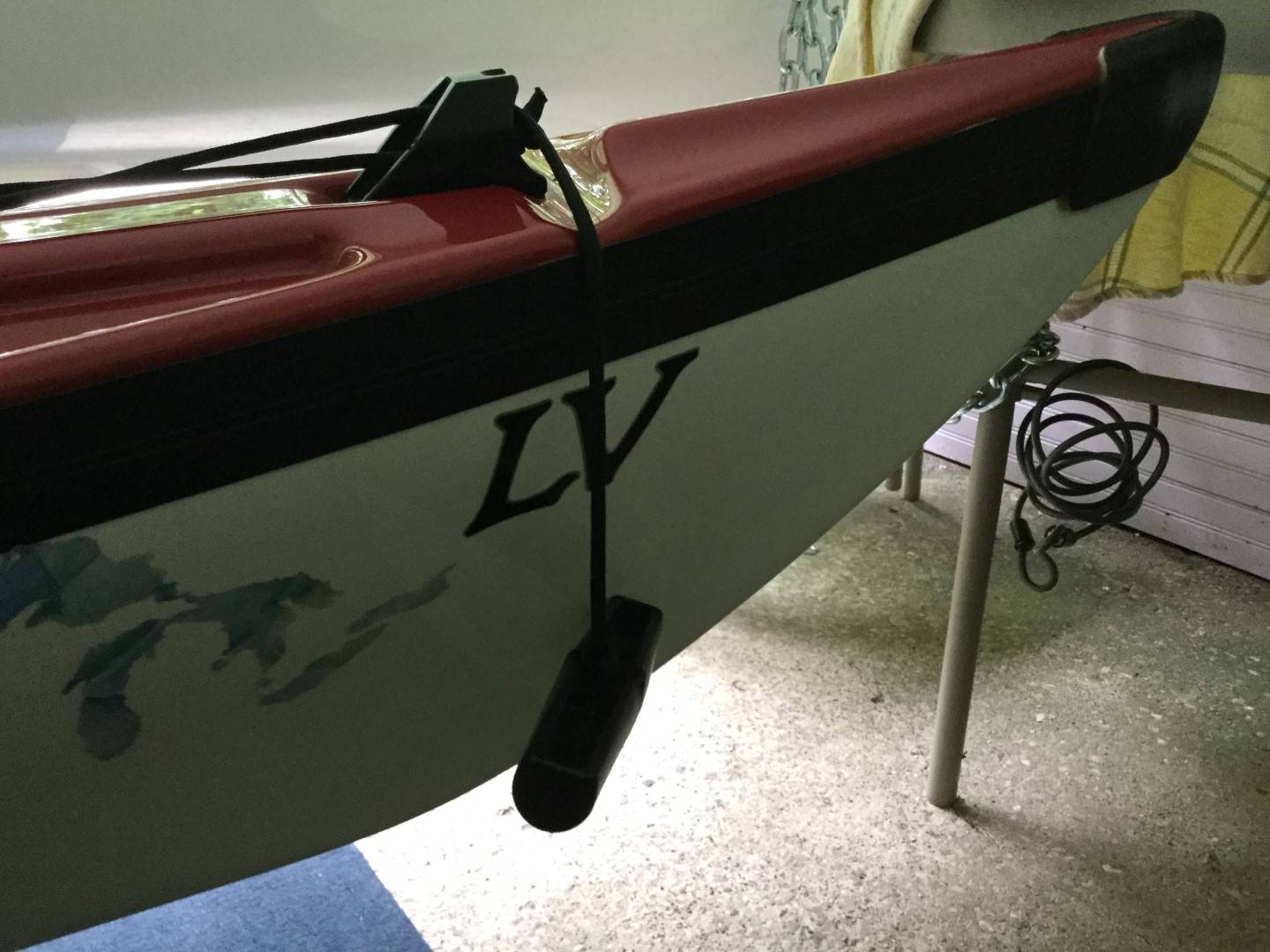 I don’t think the minicell handles will be strong enough to hold on to. Your new setup will work but may make you crazy with the banging.

@grayhawk. In theory, the handle will be released only during a rescue scenario. Hoping weather cooperates tomorrow so I can test it.

What about just covering the existing handle with foam? You could carve something with a cavity inside which the existing handle fits, then a little tape or glue to close it up. I agree that solid Minicel probably won’t hold up to much, and may actually be less safe if you grab the handle and the cord pulls free. You end up floating in the water holding the broken handle while your boat blows downwind.

If making it to fit over the existing one isn’t feasible, maybe incorporate a solid wood or plastic core into your own design.

@Sparky961 said:
What about just covering the existing handle with foam? You could carve something with a cavity inside which the existing handle fits, then a little tape or glue to close it up. I agree that solid Minicel probably won’t hold up to much, and may actually be less safe if you grab the handle and the cord pulls free. You end up floating in the water holding the broken handle while your boat blows downwind.

If making it to fit over the existing one isn’t feasible, maybe incorporate a solid wood or plastic core into your own design.

Was able to test it today on Lake Michigan. I didn’t hear any banging of the handle against the boat (and the beginning of the trip was in those demonic blobs of water an east wind creates in the harbor), so I think I’ll leave it as is. Plan to make a couple modifications tomorrow. Right now I’m using 15.25 m paracord. While it has a working load of 550 lbs., would like cord slightly thicker - IF I can find it in black. Also used the existing bungee for the connection. While it seems strong enough, plan to replace it with a thicker bungee, which I have plenty of. Just need to get some heat shrink tubing to cover the knot.

Undecided if I’ll do the same to the stern.

Heck, get colored or striped rope if it meets the specs. It looks prettier but colored line is also functional. You will have to rerig the perimeter line at some point anyway, just due to aging. And colored line is easier for a swimmer or a rescuer to spot than black stiff.

Paracord on eBay 750 lb. Every colour your could imagine by the foot.