Adding reflective accents to a PFD

I needed a new PFD so after trying on a few different options I came home with a new Kokatat Naiad this weekend. It’s comfortable and fits well but it doesn’t come with any reflective accents that you commonly see on the shoulders, etc. of other PFDs, so I was wondering about adding some.

I’m not sure if it’s safe to glue/stick/sew anything to a PFD though. Has anyone done anything like this? Obviously, I don’t want to do anything that could degrade the materials or something.

The other option I thought of was making two small loops from a reflective fabric like a bike pants-holder strap and putting around the shoulder straps.

I found this reflective version of Tenacious Tape sold by Gear Aid and was wondering about using that. Looks like it could be added to both the PFD and the kayak since it’s sold to be applied to running gear, sneakers, bike helmets, etc.

Does anyone have any experience with this stuff?

Quickly fix rips and tears on down jackets, tents and backpacks with our ultra-aggressive adhesive tapes and repair patches.

Great Hudson River Paddle required/requires all paddlers to add reflective strips top PFD, paddle and boat. The SOLAS strips I added to my original Lotus PFD when I was thinking about it stayed there for years, no degradation to anything. Getting them off would have been a real PITA, but no harm done to anything. I was just shiny. 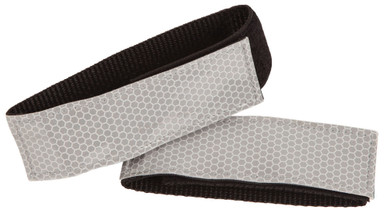 I have some of these on my PFD. Similar to Kokatat but cheap and chinese. (like $1/each) but you have to wait 2-4 weeks for the slow boat.

While it is unlikely anyone would ever make it an issue, technically, if you modify a pfd it is no longer coast guard approved. I’m not saying you should or shouldn’t do it, just making you more aware.

I have added a strip of SOLAS tape to the back of some of my PFDs without problems. Adding on to straps may be more of an issue.

tdaniel is right about modifying, but in my experience the only concern is when pfds have patches sewn onto them. The rangers at the put-in for the Grand Canyon will automatically reject a pfd that has had something sewn onto it. They were okay with tape.

The Great Hudson River Paddle would not have recommended patches that rendered a PFD unapprovable. Hence the SOLAS tape recommendation which just sticks on.

Agree that tape should be fine, but sewing something on to a PFD is not allowed to maintain certification.