Wondering whether anyone has modified their Yakima trailer to add a second “tier” of crossbars? I have the 78" wide version with the tongue extension, and have added a light plywood deck which allows me to carry coolers or an occasional item from the lumber yard. the trailer will currently carry 4 “normal” kayaks on J racks, but only 2 kayaks plus a center canoe or tandem kayak. I’d like to be able to add a kids kayak on top. This would require upgrading the shocks/springs, which is easy enough. And yes, I realize that Yakima would bless this idea. Has anyone here seen or done something like this?

Just put the extra boat on top of the others after they are strapped down and then strap down the extra boat. I use a yoga pad between them to ensure the top boat doesn’t slip. Put the lightest boat on top. I routinely carry 3 boats hull side up,no j bars.

Daisy,
What is the weight limit of the Yakima trailer? I believe they are made of aluminum. Am I correct? If so, I wouldn’t exceed the specified capacity very much at all, regardless of suspension modifications.
But that’s just my thinking…

I customized my Trailex aluminum trailer with the ability to add a cargo box with one or two kayaks mounted on top of the box - sort of like your second tier. Once I reach my long haul destination, the box can come off and the trailer acts as a flatbed for hauling kayaks. So I’m the sort of person who isn’t afraid to “go for it” with a project like this. 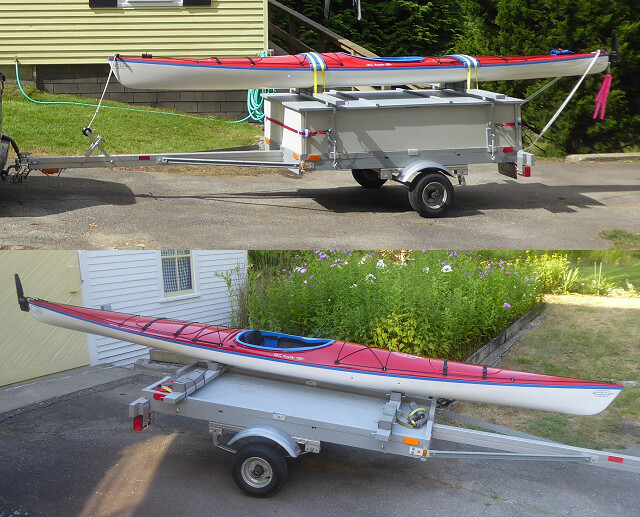 My trailer has a weight capacity of 350 lbs. and I make sure that the weight of all of my modifications plus cargo plus kayaks doesn’t exceed this (the box carries light, bulky items). The Yakima weight capacity is listed as 250 lbs so you could take the same approach, but I’d be hesitant to do it. The Yakima tongue looks very small, maybe only 2.5 inches square. So it can’t take much bending force. And more weight up high will tend to put bending forces on the tongue due to pitching motions as well as under acceleration and braking. Rnsparky’s suggestion to just strap the lightest boat on top of the canoe would be better as it keeps the extra weight as low as possible but it still stresses the tongue more. I definitely wouldn’t upgrade the shocks and springs as I think the tongue is already the weak point.

I also own a Trailex trailer with a 350-lb payload, though a different model than what your photo shows. But the size of the tongue’s tube is the same, I bet, and it is noticeably larger in cross section than the whippy, thin tube that Yakima uses. Yes, whippy.

The Trailex tube is not all that rigid, but the Yakima one is downright wet-noodlish. I’ve ridden in a car that was following a fully-loaded Rock and Roll trailer, and it was frightening to watch how much the thing seemed to flex, as if it were rubbery.

Your Trailex trailer (and mine) use leaf spring torsion and the wheels are wider… I believe both of these facts, plus the fact that Trailex builds two-tier kayak trailers, indicates that they are less likely to flip onto their sides when going around sharp curves. (The heavy axle and leaves add weight down low.) While OP says the top item would be a lightweight kid kayak, it could still shift the trailer and payload towards having too much weight too high.

If OP has not already done so, calling Yakima and talking to a tech rep (NOT Sales) would be prudent.

flip onto their sides when going around sharp curves

That’s my biggest concern with my modification as well. Trailex uses the exact same tongue on their 3 tier kayak trailer with 450 lb capacity, so I felt pretty good about that. But their tall trailer also has a longer axle resulting in wider wheelbase. I corner gently with the trailer, but an emergency maneuver could result in a flip.

It sounds as though you’re being careful (staying under 350 lb payload, cornering gently), which helps prevent tipping. The other thing is that the kayak is centered, not on one side.

Trailex once told me to carry two kayaks on my two-place trailer, not one, because the center post means the boat cannot be placed in the middle and that could cause tippiness! Now, I had already been transporting one kayak quite a few times by then, and it was never an issue. So I ignored this warning because I sure wasn’t going to lug around a second kayak just to balance the left-right weight distribution. On the modded snowmobile trailer I used to tow with, I could place the kayak in the center. Your setup allows the same—a good thing.

BTW, wheelbase refers to the spread from front axle to rear. I think the measurement we are concerned with here is “track,” the distance between left and right wheels.

Can you just rooftop one of the boats?

Do you have access to a welder or will you be using bolts?

Thanks for feedback. Clarifications: Yakima trailer is the 78" wide version, with springs/shocks rated for 250#, but I am planning to upgrade to the 350# factory option provided by Yakima. My preference would be to use bolts or pins, since this second tier would only be used for short hauls to local spots with grandkids. The combination of short stature and advancing age was why I opted for a trailer over rooftop in the first place. The “whippiness” is a valid criticism, but might be alleviated by the addition of two aluminum tube braces, as shown on the Trailex trailer. Maybe that will be the next project?
I have owned and lightly used the Rack and Roll for quite a few years, with no problems. A couple of years ago I had the opportunity to help assemble a Trailex, and was impressed with the construction and the longer spread between support bars. However, I did just “fold” the R&R against the garage wall for the winter, and appreciate the added work space.

addition of two aluminum tube braces, as shown on the Trailex trailer

Once I built the cargo box for the Trailex, I could intermittently see the top front corners of the box “waggle” from side to side by an inch or so while the back corners of the box weren’t moving. So the long tongue was bending sideways in a resonance mode. I added the two diagonal braces myself and they stopped the motion. Interestingly, I haven’t seen any sign of the tongue bending vertically. Perhaps the fact that it’s under load that way keeps it from developing any resonant “whipiness” that way.

The diagonal braces are aluminum rails for shelf brackets that I got from a closeout store.

The Trailex tongue tubing is taller than it is wide; it is not a square cross-section, as the much stouter tubing in my old snowmobile trailer was.

I think the rectangular shape might be why the tube better resists up and down flexing than it does sideways flexing. But it is still flexy, IMO. Seems OK for light loads such as a couple of kayaks.