Adding to my Little Fleet

I’ve been considering a tandem canoe for a couple of years now. Rena, my main paddling partner, and I could use another choice for tandem paddling, and rarely a non-paddling friend has been interested in getting out on the water too. This winter I decided that I’d pick one up at Canoecopia, and that’s what I did. I made my choice long before, and I hit the show early so if they had the model and hull material I wanted in an acceptable (to me) color, I could snatch it up before someone else did and thereby avoid an eight- or ten-week wait for a special order. Rena has a Mad River Eclipse, and we aren’t too thrilled with the thing since it’s Royalex Light, a material which no canoe should ever have been made of. The new boat is a Nova Craft Prospector 16 in Tuff Stuff, and we can hardly wait to try it out. It should maneuver far better than the Eclipse, and will probably be faster too on account of much finer entry lines, a much rounder cross section, and a very stiff hull. I’ll remount the seats on a slope to accommodate kneeling, and we’ll be all set. Now, I might even learn poling!

I have long been interested in a prospector. Is this the same as wenonah’s tuffweave? Nice canoe, and my choice of color too. Although I have become use to my Red Kevlar MRC explorer which I picked up used for 700. That price sure made it look good! I enjoy paddling a tandem for a change up from solo. Really fine when both paddlers are in sync.

@castoff said:
I have long been interested in a prospector. Is this the same as wenonah’s tuffweave? Nice canoe, and my choice of color too. Although I have become use to my Red Kevlar MRC explorer which I picked up used for 700. That price sure made it look good! I enjoy paddling a tandem for a change up from solo. Really fine when both paddlers are in sync.

I think that Tuff Stuff is a proprietary material of Nova Craft, but I won’t swear to it. You can read a little about it on their website. At the boat show I saw a little demonstration patch of the non-resin-soaked fabric, and it was a very supple cloth - not what you’d expect when half the fibers are micro-thin filaments drawn from melted basalt! One or two years ago I saw a patch of the finished material (two or three fabric layers with resin and color) clamped in a vice and bent back and forth, and the damage was hard to spot. It was impressive. I can’t say how it compares to Wenonah’s Tuff Weave. Perhaps it is the same material, but I don’t know.

I too enjoy the change-up of tandem paddling. It’s a whole other skill that’s very pleasant and satisfying, and hands down the best way for me to avoid automatically leaving a slower paddling partner behind. I love matching my stern stroke to the cadence of the bow paddler (we’ve only done a little the other way around). I think the whole concept of “divorce boat” is destroyed when the two paddlers have at least a modicum of ability. It’s mainly beginners who are so frustrated when sharing control.

LOL my wife and I have paddled together for 44 years and she has tolerated my paddling all that time! I also have a good friend that puts up with me in a tandem. Tuff stuff , new tandem prospector, I’m jealous!

Is the Prospector round bottomed?
If so wait for warm water for poling

Looks like it’s shaped the same as my RX NC Prospector. Except for the finer stems.

I can think of no better canoe to start poling in. I was still pretty new at it when I got mine, and it was a real eye opener. Very forgiving. 16’ Tuff Stuff Prospector weighs 56 lbs. That would be nice! I’m still lugging around that 75 pounder - when the situation calls for it. 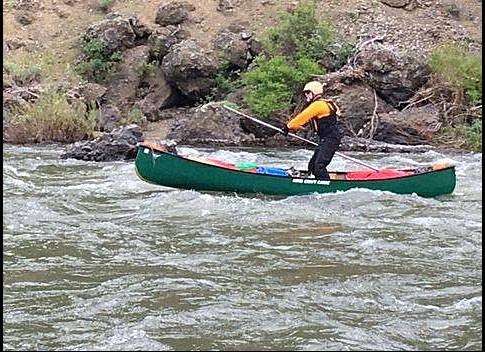 Thanks. That was taken by my friend Eric on last spring’s overnight trip on the Weiser.

Guideboatguy, that looks like a nice addition to the fleet. Congrats!