Advice for young guy trying to keep up

Preface: there’s four of us paddling in my family. Just on nice days in calm water, out for fun and exploring the local lakes. Three of us are using 10’ recreational kayaks which makes us pretty evenly matched, but my 8 year old has one of those little 6’ SOT “Wave” boats, though we fitted it with a nice seat and got him a real paddle.

Unfortunately, while he’s a trooper and has never completely crapped out on a trip, he’s not enjoying it as much as the rest of us. He doesn’t like his boat’s (utter lack of…) tracking, and how slow he is. And more worrisomely, he says his back really hurts after a mile or so.

I thought maybe adding the seat would really help his back but he doesn’t feel much difference. I’ve toyed with the idea of building a little skeg to help him track straighter. And I’m sure part of his speed problem is that he’s 8 and is only going to make so much power, especially as he’s still learning to paddle well.
(He’s tried one of our 10’ Pelicans and liked it fine, but that was just for a few minutes, and it looked to me like he was straining to paddle over it’s wide beam and tall sides.)

I’d love to find ways to improve his boat so that he’s comfortable and as fast as he practically can be. But maybe I’m wasting time and money on that and there’s a better way.

I’ve tried looking around a bit for “youth” recreational kayaks, but I didn’t find much except for the same boat he’s already got.

I’m seeing recommendations for the Perception Acadia Scout or maybe the L.L. Bean Spin (bad tracking?) but neither are in production, looks like.
So I’ll troll for one of those in the local classifieds, but are there any other realistic options?

The 8 year old needs a longer and skinnier kayak to have a chance to keep up with adults on 10’ long kayaks. Will probably end up being more of a touring type kayak, rather than a short fat rec type kayak.

I don’t recall any specific models at this moment, but there are some out there.

What is the 8 year old’s height and weight?

Better boat. Or get a tandem kayak so he can be with an adult and not worry about falling behind. There are some rec boats that can be set as singles or tandems, which may give you more flexibility.

Assuming that he’s not going to be happy to be stuck in a tandem with an adult while his brother and sister can go on their own, do you have a suggestion as to any better boats I should look at?

Although finding a Piccolo may not be easy.

How about you towing him for a while whenever he tires?

Dang, that’s pretty neat. Agreed, I’m going to have to look high and low for one, but I’ll put it in my list. Thanks!

I’ve considered towing him, and that’s obviously an option. Might be the best one. Part of why I haven’t is trying to gently feel out how much of this is just him trying to build up to a new activity and how much is a “real” problem I can help him solve. So far he and I just hang back until he’s ready to go on, but towing might be helpful.

8 year old get a tandem

Get him paddling lessons or watch forward stroke videos to help with fatigue, pain and speed, regardless of the boat he’s paddling.

Certainly a good point. I sit them all down a couple times a week to watch instructional videos on paddling, rescues, cool trips either sea kayaking with whales or WW stuff. Try to keep it fun.

We spent half of yesterday afternoon practicing assisted rescues in one of the big local lakes. What a load of laughs!

The boys can get themselves back into anything. Dear old dad (me) finds lots of creative ways to play submarine. Lol.

Are you moderately handy with tools? Tom Yost offers free patterns and instructions for making skin on frame kayaks. Page through this gallery from his “Yostwerks” site to see “Kidarka”, “Sea Flea” and “Sea Pup” models that people have built for their offspring. There are also companies that offer kits.

Where do you live? There is a used Piccolo for sale in Menominee, Wisconsin, at the moment. https://greenbay.craigslist.org/boa/6195643346.html

Side note: I liked the old P.net set up better, where most forum posters had their general geographic location specified in their profiles. I wish people would add that voluntarily. It is much easier to give useful advice when we have some idea where people are paddling.

Eight is when my daughter and I built her first kayak, a Pygmy Osprey 13’. The kit is not inexpensive but it is a good fast kayak for a small person. It is also excellent for small adults. We sold it for a decent price to a small adult once she grew out of it. Pygmy kits are here: http://www.pygmyboats.com/boats/kids-kayaks.html

Another skin-on-frame design with some more options to ask questions and more detailed plans are over here at Kudzucraft: http://www.kudzucraft.com/web/boat-designs/boats 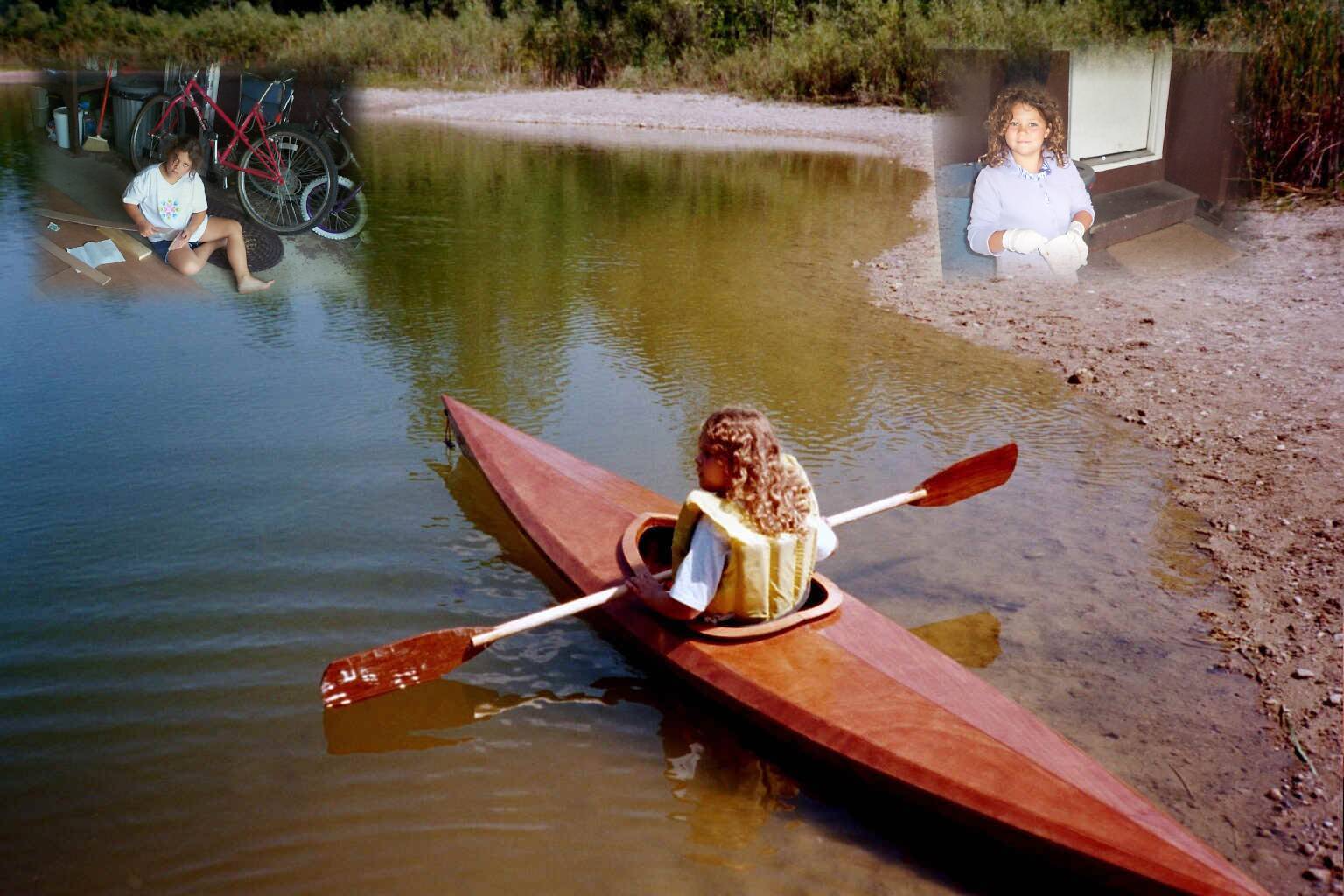 Probably challenging to find. Once the tot gets the hang of the kayak’s maneuverability the Prijon Flipper will allow them to zoom around. About 20lbs thermoformed with formed ladder type foot pegs (no moving parts).

Thanks so much for all the suggestions!

Answers: We’re in central PA not far from the Susquehanna.

I am probably a bit more than averagely handy, with several years of formal instruction in woodworking. I LOVE the boat plans and kits idea, and I would be really quite thrilled to build kayaks. Having looked at the plans and galleries of pictures, though, I’m pretty concerned about durability. Every shoreline we launch from or land on around here is bare, sharp, shale rock shards too sharp to walk on barefoot. It would be heartbreaking (or worse) to slice the bottoms of one of those beautiful hand-made boats, and I truly can’t imagine us being careful enough every time we’re out to prevent that. I’m more careful about dragging and scraping our boats than other kayakers I see out, but we still have scratches in the hulls even from one or two trips. Is there an approach to the kits that is more rugged?

Marshall, thanks so much for the Prijon suggestion. Another great option if only I can find one.

I certainly appreciate that suggestion and the reasons behind it, but if there’s a way to keep him in his own boat, I’d like to go that way. He’s not going to love being “stuck” in Dad’s boat when the 12 and 15 year-old siblings are off zooming around on their own.

Might be a good option for their littler brothers, though, who are, so far, left home with Mom.

The SOF boats are covered with heat shrinkable nylon which is then impregnated with a 2 part epoxy like coating that is tough as nails.

Yes, I can corroborate what String says about SOF (skin on frame) kayaks. Mine is 10 years old and has been dragged and paddled everywhere, including on the shaley Susquehanna (my boyfriend for 4 years lived directly on the West Branch). You can find videos on Youtube of people demonstrating how tough they are – mine is 8 ounce nylon ballistic cloth with 2=part epoxy. You can literally hit it with a hammer and it will just bounce off. I have scraped over rocks and hit rebar and rusted sharp metal sticking out of old docks – in one case I got a dimple which eventually smoothed out on its own.

Watch this video or just do a YouTube search on “skin on frame kayak durability” for others with similar demos:

Another cool thing about skin on frames is that you can paint all kinds of designs on the fabric before the final sealant. If you looked at the Yost galleries you can see some examples of that – very cool for a child to be able to design and decorate their own boat.

Construction of skin on frames is usually a little quicker than the all-wood boats. They can also be re-skinned eventually (though it takes a long time and a lot of abuse before that is necessary. Many people skin them temporarily with clear vinyl for test runs to fine tune the frames – another fun thing for a kid.

In one of our local high schools outside of Pittsburgh, the wood shop teacher has the students building skin on frame kayaks – much more popular than birdhouses!

here’s another, with the founder of KudzuCraft boats demonstrating hitting an SOF with the claw end of a hammer and using sandpaper on it. Few plastic boats would hold up to this kind of abuse.