Advice on doing a solo trip without livery service

Hello fellow paddlers! I’m into my third year of kayaking and I am interested in floating down a river not having livery service. I’m looking for advice of how to get back to the starting put-in where the car is at. I really don’t want to fight the current going back.
Any suggestions or advice? Use Uber maybe? Help would be awesome!

I did something similar once, not on purpose.

About five years ago, I made it halfway around a winter circumnavigation of Lopez Island in Washington’s San Juans before wind and currents jammed me up. After I hauled out onto a beach, I had to hitchhike the entire length of the island back to my car.

You’ll feel most comfortable if you can hide your boat out of sight at the take-out. Consider using an unofficial takeout for this purpose, as it’s likely to see less traffic than, say, a boat ramp would.

Bring a big backpack or something to carry your expensive equipment back to the car: electronics, binoculars, drysuit, paddle, etc. Leave whatever is the rest of your stuff in the boat with a cockpit cover to discourage prying eyes. Bring a change of clothes, including shoes, so you don’t have to hitchhike or Uber wet. Triple-check that you have your car keys on you, not back in the boat!

You could bike back. Drop your boat at the put in, drive to the take out, ride back to the put in and lock your bike up.

An Uber would do it too.

I have used bicycle shuttles many times. I have paddled with a guy who just goes into a bar in a town where he wants to take out and offers a guy there a couple of 20’s to ride with him to the put in and drive his car back to town.

@pblanc Just make sure to grab someone that just got started!

You would thing that strategy would be fraught with peril, yet he says that he has done this quite a few times and always found his car at the agreed upon location.

Paddle upstream first, then float back down.

Yeah, similar options:
Go upstream then float back is my go-to.
Find a paddling partner and do the two-car shuttle thing. You save time and miles if both cars can carry boats.
Sweet talk your wife into driving you.
Canoe liveries will usually shuttle your boat for a price.
If you are into white water, Ohiopyle’s U is a quick carry back to the top of the rapids.
If you can lock up the boat, Uber back to your car.

As noted above, hitchhiking and bicycle shuttles are classics. Some have been known to modify carts/trailers to tow behind bikes. I’ve also seem people carry standard mountain bikes down river in canoes. Using a folding kayak or canoe could also help with shuttle logistics and, if available in the area, could be used with public transportation. For longer trips we have found locals (but not a bars) willing to shuttle for a price - bring cash in the local currency.

An option that we use with some frequency here in South-central Michigan is to paddle upstream first and then come back to the put-in.

A lot depends on the river you’re looking at, how far from home, how long a trip… When I was younger and back in times where hitch hiking was more common, I’d just do the trip, hide my stuff in the woods near the take out, usually chained and locked to a tree, and hitch back. Usually people would see a guy hitching with a paddle and know what was up. I figured the odds of someone with bolt cutters first finding then stealing my stuff in the time it took me to get back with a car was pretty remote, and I did get away with it. Repeatedly. But folks don’t pick up hitchers like they used to. I don’t do that any more.

The bar thing works as pblanc mentions too, though after having to take a ride (from a near empty bar) with a person in marginal driving condition I’ve since given that practice up, too.

Of course if you can find someone, preferably a friend with boat racks, willing to pick you up at the end, be paid with gas money, a bit extra cash, and a meal out somewhere along the way back, that is a pretty good solution. But if you do that, decency dictates that you have to finish the trip on time. You’ll be paddling to a schedule, which can be a bit of a bummer… And wind or thunderstorms can screw things up, as can an unreliable friend. And a big downside to that is (unless your pick up ride has boat racks) at the end you still have to go back to the put-in, get your car, drive back to the take-out, load, and drive back again… that’s a whole lot of rigmarole on the backside of the trip. (Unless maybe your take-out is closer to home than the put-in…) Figure on it being late before you’re done.

Its really nice if you can hide the boat in the woods somewhere near the put-in, chained with your pack, water jug, etc. under the boat, and get someone to caravan with you to the take out. There you drop your car (with racks & don’t forget your keys) and ride together back to the put in. Gas money, a little cash, and a meal is in order there as well, though it might have to be hurried. Then its just a question of throwing everything in the boat and paddling to your car in however many nights you can afford to be on the river. For a weekend trip, for example, its nice if you can get off work Friday afternoon pretty early, get the shuttle and meal done, get on the river (though not necessary cover any substantial distance), set camp, and be ready to paddle for the next couple days, getting back Sunday evening.

But it depends on distance, sometimes weather, and it really helps to be doing it on a familiar river. Its good to have camping islands, estimated paddling times, and emergency bail out points, in mind from previous experience.

This is why river tripping is easier with a group. Group shuttles where there’s someone with a car that can haul several paddlers back to the put-in and one of the cars at the end with extra capacity for the shuttle driver’s boat and gear simplifies things considerably.

Buy another boat and find someone to paddle it, just tell them they have to put racks on the roof of their car.

Easiest way is to paddle upstream first and float back to your car.

Have no idea where you are. A river in the Midwest is different from a river in northern Maine. The latter involves logging road shuttles and is very dangerous with a bicycle. ( plus a century ride) Uber is non existent
So we need more context

There are only many ways to get from downriver to upriver when you are paddling solo, and, mostly, they’ve been covered. Bike, Uber, hitch hike, wife/friend-angel shuttle bunny, walk, I have used them all. Plus, not mentioned, subway. I’ve not used a city bus. Had planned to use collectivos (bus) in Colombia, but that trip never materialized.

I paddled the Anacostia River from Maryland, across the Potomac to Virginia, walked to National Airport, and took the Metro back to Maryland, where I caught a taxi back to my truck. Got a lot of interesting looks walking through the airport in paddling attire wearing a PFD, with a paddle and dry bag over my shoulder, from bustling travelers in business attire pulling their overnight bags.

And of course, as YC points out, location matters. No Metro in northern Maine. But I’ve done bike shuttle on the East Branch, hitched from Rockwood back to Greenville, received good-samaritan shuttle from Moosehead to the West Branch from a couple guys we met by chance at Raymonds, hired a riverside camper to drive me off an abandoned trip on the Machias, and been picked up while walking along the Guy Allen Long Stream Road (Maine Northwoods). The latter is a very lightly used road. I’d been walking for over an hour before a vehicle came along, and I didn’t even need to stick out my thumb. In those parts, if they see somebody on foot, they are probably going to stop. And yes, logging trucks can be hazardous to bicycles, but compared to what? For years I bicycle commuted in downtown Washington, DC., and, to me, the logging roads don’t seem any more hazardous.

I’ve never done the walk-into-a-bar shuttle, but have confidence it would work.

When I know I’ll be leaving the boat, I bring a lock and cable. Near National Airport, I locked the boat and carried with me everything I could, because that’s an area where gear is highly likely to disappear. If you had stashed a bike, just transfer the bike lock to your boat. Gear is an issue. Hide it as best you can so as to not tempt, but otherwise, it’s just a risk.

And if the current is not too severe, try the upstream thing. No shuttle is the simplest shuttle! Plus, you get a good workout, and you get back really quick and easy.

LOL… that is what we do on our West Branch trips or on routes where you don’t have to switch rides several times ( the Allagash being one that requires that)… The Guy Allen road is not so lightly used.

Oh logging roads are hazardous especially when new rock has just been laid. Those sharp edged boogers can slice you up when they get thrown by passing trucks. I get a windshield a year it seems.

I would like to thank everyone for their input. Lots of great ideas and things to consider. I really appreciate the help and hope to one day meet up with my fellow paddlers! Thank you again!

Get a canoe. Get 2 poles. At least 2 poles…find some whitewater. Start off by going uphill. Trust me, the return is so well deserved and enjoyed. Eckilson and myself here. 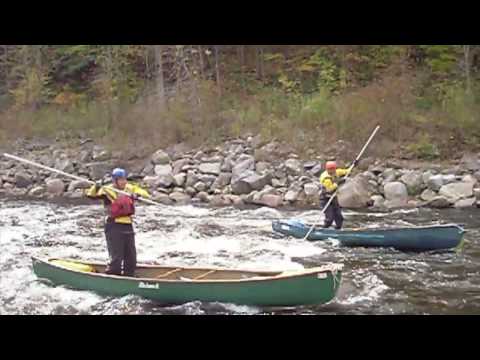 A lot of folks are using Uber to return. Just las week a couple came down the Wabash and pulled over at my place while they waited for an Uber.

I seldom go canoeing anymore unless I’m with my long time partner/wife.
On most of the rivers around the area where we live we run our own shuttles with her Escape, and my F-150. Why 2 vehicles? It cost us less to pay for a few extra gallons of gas than the shuttle fees would cost.

City folks show up and rent junker canoes and pumpin seed kayaks; then the livery runs their shuttle. They throw money at the liveries like it’s
trash. A few weekends of shuttle fees and rental fees cost them the price of decent, used boats. 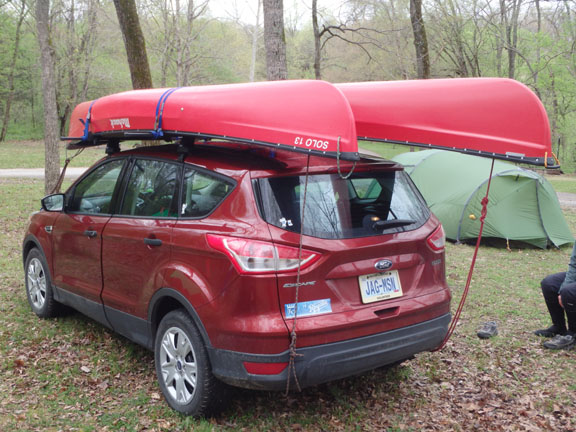 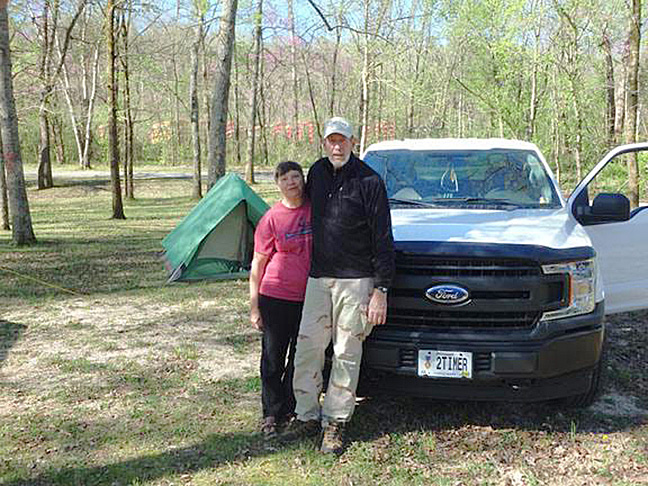