They are asking $1250 for this canoe without gunnels on. States that gunnels are included though.

This is the picture below: 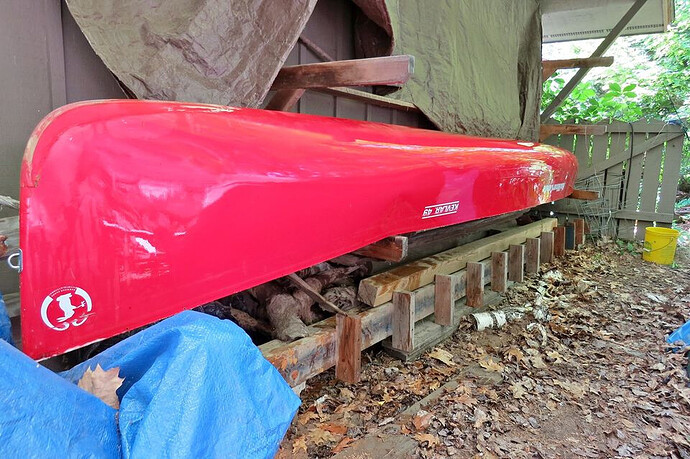 Very curious. To my knowledge the “Kevlar 49” decals were not seen on MRC boats after the early 1990s. As for the “Expedition 186” it was introduced in 2009 and so far as I can find out was only made for a year or two. But I have never even seen one and could be wrong about that.

The pictures of the Expedition 186 in the 2009 and 2010 MRC catalogs show a markedly swedeform hull design. An 18 1/2’ long expedition fast touring boat would definitely be a niche type of design. Is that really what you are looking for? A boat that long can be pretty tricky to portage if there are any trees in the remote vicinity.

Assuming you are interested in a boat of this type I would certainly want to know more about the gunwales. Why were they removed and why have they not been reinstalled? Also what is the nature and condition of the remaining wood trim, the yoke, thwart, carry handles, deck plates and associated hardware. Finally, what about the seats? The 2009 catalog shows this model with a fixed front seat. The 2010 catalog shows a sliding front seat as stock. In this hull design I would consider a sliding front seat to be highly desirable to trim the boat.

And I would certainly ask the seller for the hull identification number which will tell you the month and year of manufacture. If it is earlier than 2009 it is not an Expedition 186.

I’d be concerned. I’m guessing that the gunwales and other fittings are off for the paint job. It looks like there is a long patch about midships. Not sure what is going on near the bow. With the damage and no idea what else is being covered up I’d say the price is about $400 - $600 too high even if it is Kevlar.

I don’t see anything that looks like a patch, just light shining off the glossy hull. I doubt this boat has been painted since it would be impossible to get an exact color match on an older hull, and I know from experience that getting replacement decals of that vintage is difficult to impossible. I am guessing from the picture that this boat has been stored in the location shown. It is possible that the gunwales and wood trim were removed from the boat to protect them from the elements.

It looks to me as if a narrow abrasion plate has been applied to the bow of this boat, painted over, and much of the paint on it has abraded off. If done correctly, this wouldn’t really diminish the value of the canoe, but is certainly something I would inquire about if I were interested in the canoe. I would also ask about the painter loop since that is not stock. I am curious as to how it was installed as there will be a bow flotation tank on the inside of the canoe that I would expect extend up higher than the level of that loop.

Assuming this is an Expedition 186 it is a rare canoe. One source indicated that only 50 such were made and they cost nearly $4000 new. It looks like this boat was intended as a fast, flat water tripper to compete with the Wenonah Minnesota II which is the same 18 1/2’ length. The Minnesota II costs over $3000 new.

Assuming that this is an Expedition 186 and that is the type of boat the OP is looking for, that the guwales and all wood trim are available and undamaged, and that the hull itself is undamaged, $1250 for a Kevlar composite canoe of this size would not be an outrageous asking price.

I will keep you posted. No response from the seller yet. But the post does state “new gunnels included” and need to be installed, so I don’t know if they are wood or aluminum.

I’m also curious on the weight. the sources I found were putting this at around 60lbs

Well, should you happen to buy it I would be very interested if you posted a review after paddling it. I would expect the weight on this boat to be in the 55-60 lb range. Even my Kevlar MRC Explorer which is over 2 feet shorter weighs just around 50 lbs. But the Explorer is an all-fabric layup whereas this hull has a foam bottom core and ribs which will keep the weight down some.

I really like big canoes and am always attracted to them. I would assume that the original gunwales were cracked up. The guy probably bought new gunwales and never got around to installing them. I would look carefully at a boat like in bright sunlight for evidence of repairs to the hull. 60 pounds would be about right for a large kevlar hull.

From what i remember about this hull it was indeed a short lived knockoff Minnesota II. Close, but no cigar. It was slower than the MN2, and heavier and expensive. Done after Mad River became part of Confluence…

This photo is a screenshot from a PDF copy of the 1995 MRC brochure. 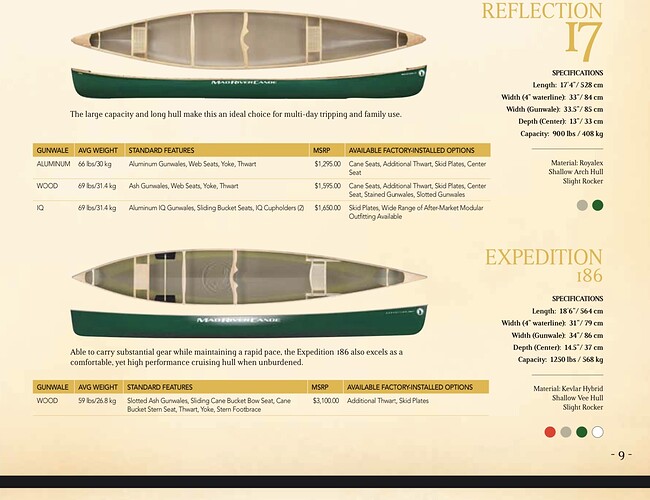 thanks to canoedoc.
I had a Reflection and it was a great down river boat.
Don’t call the 186 slow.

Just out of curiosity, is your comment regarding the Explorer 186 being slower than the Minnesota II based on personal experience?

I have paddled in the MN II a number of times but have never even seen an Expedition 186 so they haven’t been very numerous in my neck of the woods. I really am interested in how large tandem boat with such a pronounced swede-form hull handles.

The 186 might slice through waves, but it could definitely haul ass and carry a load.

There are many MN2 in the stock class of the 90 Miler. MY friends paddled that class in an 18’Jensen.Iwent from C-2 Rec to C4 in 1995, then to Open Touring in the MN4 to bring never paddlers into the 90Miler. I watch boats that pass me and those that I pass. When a team enters a different canoe in a class, many are interested in how it paddles. A Mad River in C-2 Stock is rare, Open touring not so rare. The 186 Explorer did not place well, and did not return in C-2Stock. the top view shows the extreme Swedeform stern which makes the stern paddler’s reach very wide the plant location is at the full gunwale width of 34", not ideal for speed or comfort or technique. The price listed in 1995 is the same as for the 23 foot long Minnesota4 I bought, which has 4 seat and weighs 64#.