Advice on paddle style for longer distances - Wing or Touring

Like most people, I started with a standard paddle (Aqua Bound Manta Ray) and then went to a Stellar Mid/Pro Wing Paddle which has a 6" blade surface area. I love the paddle but for long distances, it exhausts me much faster. It’s more difficult for me to move at a more relaxed pace with it which contributes to this I’m sure. It’s great for the Surfski but I was looking to see if there would be something easier on me but not comprise the advantages of a wing too much.

I’ve read that a lot of people recommend Epic’s Small Wing Paddle because it’s easier on the body but I noticed that it has a larger blade surface of 6.3". I realize that just because it has a bit of a bigger blade area doesn’t mean it’s harder due to blade shape/etc.

I noticed that Epic does make an Active Touring paddle and was curious if anyone has experience with it. Or, is the Small Wing a good choice despite the blade size compared to the Stellar.

I have the Epic Active Touring (burgundy shaft) and the Epic Relaxed Touring (green shaft). Both are one piece paddles (as opposed to the newer ones). I love both of them, but I keep the Active Tourer in my car for regular use.

Wing paddles are really designed for aggressive high angle paddling, like for speed. Touring, or maybe a greenland paddle are designed for distance. I would definitely think you would be happier with a paddle designed for sustained paddling efficiency and comfort. I have all three types and although the wing is new and I haven’t had a lot of chance to use it yet, I use the greenland paddle for long periods of paddling. I think your shoulders will greatly appreciate the lower angle efficiency of either the greenland or touring paddle.

Check out the Wind Swift paddle. I switched from a wide blade because of a bad shoulder. I can paddle longer with less pain because of the narrow blades.
You can’t increase speed from a stop as rapidly but you can maintain once there.

Thanks for the advice! I bought my wife a Greenland paddle for her birthday and used it a few times. I think I’ll have to play around with it a bit more and see what I think.

Cool paddle! A mixture between Greenland and a standard paddle. Interesting!

Good to know! I’m eyeing the active tour but not for sure yet. These things get so expensive, especially in carbon. I want to make sure I make the right decision.

Have you tried using the Mata Ray, if you still have it? Or borrow an euro from someone to test?

I have a Epic Small-mid Wing and a Werner Cyprus. At first, the wing would tire me quicker. After I got used to the wing technique, I can now paddle longer (and faster) with the wing than with the Cyprus. They are about the same weight, so I think the main reason is because I get better rotation with the wing. If you use a wing with an euro technique, it becomes really heavy.

If your wing has an adjustable shaft, try playing with the length. In theory, a longer length provides more leverage and thus will be even more strenuous, but I find it easier to reduce my cadence to a comfortable pace with longer strokes using a slightly longer shaft. Some people prefer the opposite, reduce the shaft length and take short strokes at a higher cadence. You have to try and see what works for you.

No experience with a wing, but I think its more for racing and high energy paddling, so exhausting you faster makes sense.

Have you tried a bent shaft paddle? I got a bent Kalliste hoping my forearms wouldn’t ache and it worked. I ran out of daylight paddling 23 miles, no pain.

I still have the Manta Ray, yep.
Great point, I will give those tips a shot!

Nope, I haven’t tried a bent shaft paddle. Never considered it actually but forearm soreness/ache is something I do get. It’s bad to the point where it’s difficult wearing a glove on my left hand because it creates more tension to grip the paddle than bare-handed. This may be the actual direction I may need to go, interesting!

Just ordered a Werner Athena Bent Shaft paddle. We’ll see if that works… I couldn’t find a Kalliste bent in stock and I’d consider myself a smaller paddler at 125lb, 5’8 so the Athena may be the perfect fit. I’m thinking this has a good chance of solving both the forearm issue and the exhaustion issue. I’m excited to give it a spin when it arrives.

I’m a big fan of traditional paddles. Light, easy on the body. Anyone wants to try one your welcome too, I’ll help you make one or discuss making you one 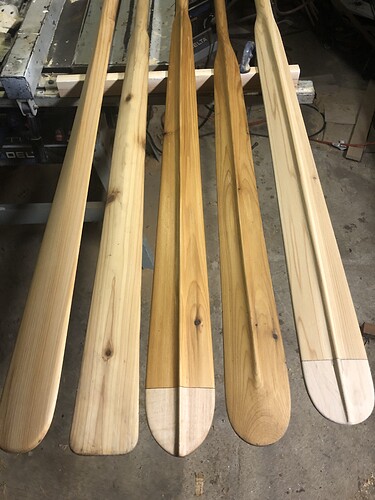 I’ve only made 2 Aleut style paddles. One is on our den wall, the other is a back up for a friend who routinely paddles 20+ miles per outing with a Euro.
He called a couple of days ago to tell me the Aleut had helped him when he started having shoulder pain in the middle of a trip.
I was tickled.

A critical aspect missing from the choices mentioned is paddle length.
The paddle blade will offer features such as stability in the water, slip vs grip, wind resistance.
The length is your gear ratio.
Some examples.
When I raced sprint kayak my paddle was 218cm. For surf ski or flatwater marathon, 215. Wing paddle, of course.
For play paddling in surf or rock gardens, or for general sea kayak coaching, 210.
For expeditioning…205. A heavily loaded boat I much preferred paddling at a higher stroke rate with a lower load per stroke. My favorite paddles for this were low aspect type.
For a spare paddle, I often brought a greenland paddle, just for a fun break. And yet for rock gardening my favorite spare was a very short whitewater…canoe paddle!

Would I ever use a wing for tripping? Yes, when I was going solo. Due to my fitness, during tripping with others I had to do whatever I could to slow down.
But my wife - not strong and only 5’2" - would much prefer going tripping with her small wing. Paddle length in this case? 196cm.
And over the years I noticed more and more of my friends going on multi-day trips using wing paddles, even though none had a racing background.

One very good reason for using a wing is for the exceptional stability in the water that the wing provides. No need to hold it canted (like greenland) or tightly for high or even low aspect flat paddles, one can hold onto a wing paddle with an extremely light grip, even just using fingertips. This can make for less fatigue over distance.

I disagree about the “high angle” technique being inappropriate for touring/tripping. A properly fitted paddle doesn’t require a super high upper hand position; long “low angle” paddles are PITA for a gear ration, no wonder the stroke rate is so low; really long “low angle” paddles can appear low angle referencing the paddle shaft, yet the upper hand position often isn’t low! And of course a long paddle at a low angle produces yaw.
You can use whatever makes you happy, but it is hard to argue about the efficiency of
the high angle technique.

One last point about any paddle used for tripping, and this is less about gear and more about rationalization. Over the years that I was coaching paddlesport, a common question I would get after someone would return from a long trip was what paddle they should buy, because their arms and shoulders suffered so much. I would ask what kind of workouts they did to prepare…guess what the answers were.

Your wing paddle is a mid/“Pro” size? I wouldn’t give up on the possibility of using a smaller wing instead.

You just might need to check your technique and give the body some time to adjust to different body mechanics.

I am smaller, lighter, and doubtless older and weaker also, than you seem to be. Switching to a ski has caused me sore sitbones (possibly inflamed bursae). But the small wing blade (Gara Odin S) feels good. I had expected some kind of discomfort in shoulders or wrists or hands…nothing like that happened. Typical distance paddled this first season on the ski was 9 to 10 miles, with a few longer ones. I plan to stretch that next year, but only if the sitbone pain stays away. I finally installed a 1/2” seat pad on my next-to-last paddle of this year. We shall see what happens in the spring.

The Euro I had been using for years with the sea kayak was a Werner Shuna, 200 cm, after years of using longer paddles and progressively stepping down in length. My wing paddle is 205 cm (adjustable to 215 cm), but the sitting height and position differ from sitting in a sea kayak.

One last point about any paddle used for tripping, and this is less about gear and more about rationalization. Over the years that I was coaching paddlesport, a common question I would get after someone would return from a long trip was what paddle they should buy, because their arms and shoulders suffered so much. I would ask what kind of workouts they did to prepare…guess what the answers were.

That’s like asking what kind of backpacker boots to buy because the hiker did not train for a trip by actually hiking in them with some weight in the pack, and their feet hurt.

How man sq cm or sq in is the blade in question? 6" means nothing because the length and shape of blade also play into this. if you have a surface area larger than 720cm2 I would definitely just get a smaller paddle.

I have the Think Powerwing at 655cm2 and its great for long distance paddling. I think most people buy too large of a blade. This is also why people like greenland paddles, they have a tiny surface area. In terms of absolute efficiency, a wing is king. Nearly everyone uses one that is too big though. I think that’s why Wing=Hard in many peoples minds. It isnt, it’s just means the blade is too big. Braca also offers blades into the mid-600cm2 surface area.

Also, wing can work fine for medium-low angle paddling. Oscar Chalupsky (one of the top athletes in the sport for the last 30 years) uses a relatively low angle, so wings are not “sprint/high angle only” paddles.

I have 3 Wing paddles. The last one I got is my favorite, small blades and 205 to 215 cm. I use wing paddles exclusively, have for many years. I do quite a bit of long distance paddling and the wing is the paddle that serves me well.