Alligators are not friendly.

You have probably seen the report on the woman grabbed while walking her dogs beside the alligator’s pond.
I have seen people do that on the banks of the Myyakka River in the state park, which is gator paradise.
The woman’s body was recovered with gator bite marks.
My grandfather was a gator Hunter in Florida before WW2. Per my mother, he used small dogs to attract the gators. The gator was not allowed to get the dog . Point is Gators are attracted to small animals. Apparently the woman was in the right place at the wrong time with bait on a leash. Probably pulled under water and drowned which is what gators do.
The gator was caught and killed.

Another reason I love the fresh coast.

She had two dogs one was injured. She might have gone to the dogs aid and the gator got her.

Right on they aren’t friendly and big gators are dangerous predators. Even the small ones will bite if you try to handle them. The news reports 24 fatal attacks in FL in the last 40 years which is just a bit over 1 fatality every other year. Every one is a tragedy! Given FL has a population estimated to be close to 21.5 million, and over a million gators. People are around gators every day you would think there would be more fatalities. So the danger exist but the risk is small. Swimming with them or walking with a dog where gators are present or with small children is reckless to say the least. Sort of like not wearing a PFD, or looking both ways when crossing a street. 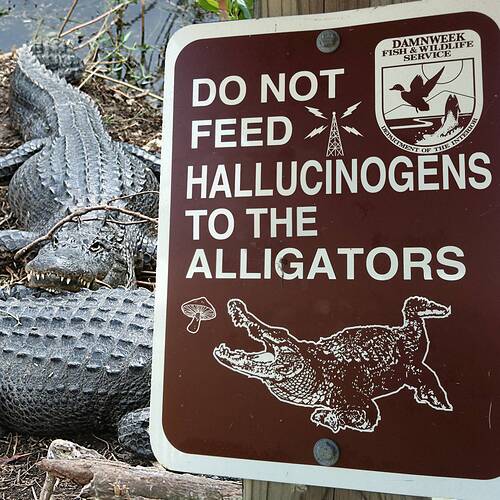 Psilocybin ascribin’,
a gator’s walnut brain.
Prehistoric beast’s psychedelic feast
is colorful end game.
But Alice ain’t afraid her scute
down gullet’s gonna go.
Mr. Carroll had her up her dose.
In Wonderland she walks hippo.

Update: They have now found the body. First the they found her arm inside the gator they captured.
Gators are found in fresh water so not a problem in the Keys.

But you have Crocs.

I think the poor woman’s death may make a whole lot of people more cautious since the idea of an adult being taken by an alligator ON LAND is pretty terrifying. Hey castoff, how many of those 24 fatalities were adults, on land?!

Rumor is a ranger told her not to walk her dogs that close to the water.

@Overstreet said:
Rumor is a ranger told her not to walk her dogs that close to the water.

I hear her husband warned her and the condo sent out a notice two days before. Maybe she felt safe with her three pit bulls.

So many people have no clue of the natural world and it’s dangers.

They don’t like to ride in pickup trucks either:

Wow. Lucky thing that guy’s head hit the grass and not the sidewalk as he tumbled. It could have been far worse. And even before things took that wild turn, that boy who walks across the field of view near the end had it all figured out: “This is a job I would never do when I grow up.”

You call that “restraining”? If I had to do that job I’d be putting in a claim to whatever labour health and safety board there was, stating that I needed better equipment to do my job safely.

Proper restraining is a .357 but someone would film it and PETA heads would try to put the guy in jail.
I have nothing against gators and understand why they end up in yards but , like copperheads, I would remove them with extreme prejudice.