Last Saturday we did the Altamaha River from the ramp near Rabbit Island out to the sound across to Sapelo Island and up the North River to Blue and Hall Ramp, 23 to 26 miles. Left my GPS at home and haven’t heard from the other tracker. It was not a bad paddle. We had tidal current in our direction the whole trip. The Atlantic ocean was only 1 to 2 ft with maybe 10 mph winds from the south east. That southeast seemed a little easterly from time to time during the crossing. We only saw one gator on this trip. Must have been too salty. No sturgeon or tarpon appeared which would normally be on that trip. Fortunately there were power boats returning which helped us locate the North River entrance. Water was a comfortable cool 76 degrees. Nice living in the south except for the $%^&**(&!!! yellow flies were out so you had to keep moving at the boat ramp and any time you got near the marsh grass. They bite and draw blood from unprotected skin… 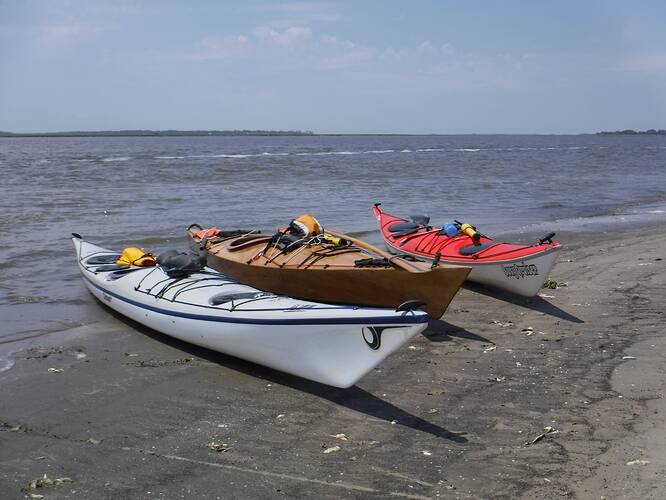 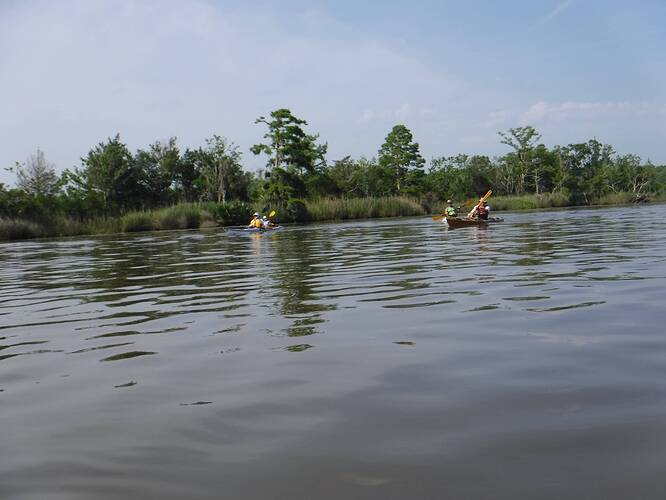 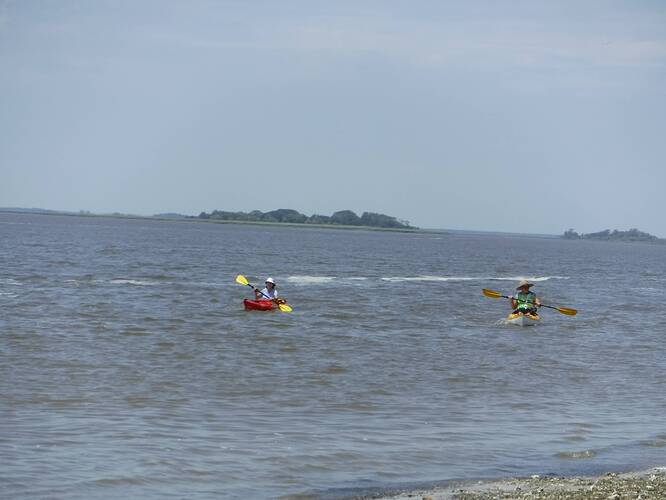 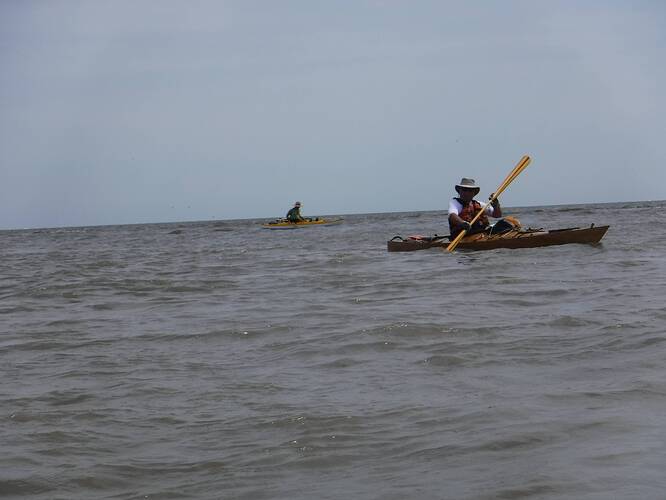 Just looking at the pictures that last one has the Cape Verde Islands in the back ground I think…very far away in the distance.

Sounds like a good paddle. I always look out over the river, imagining being on it, when I cross it on I-95. First grabbed my attention years ago crossing it on highway 121. 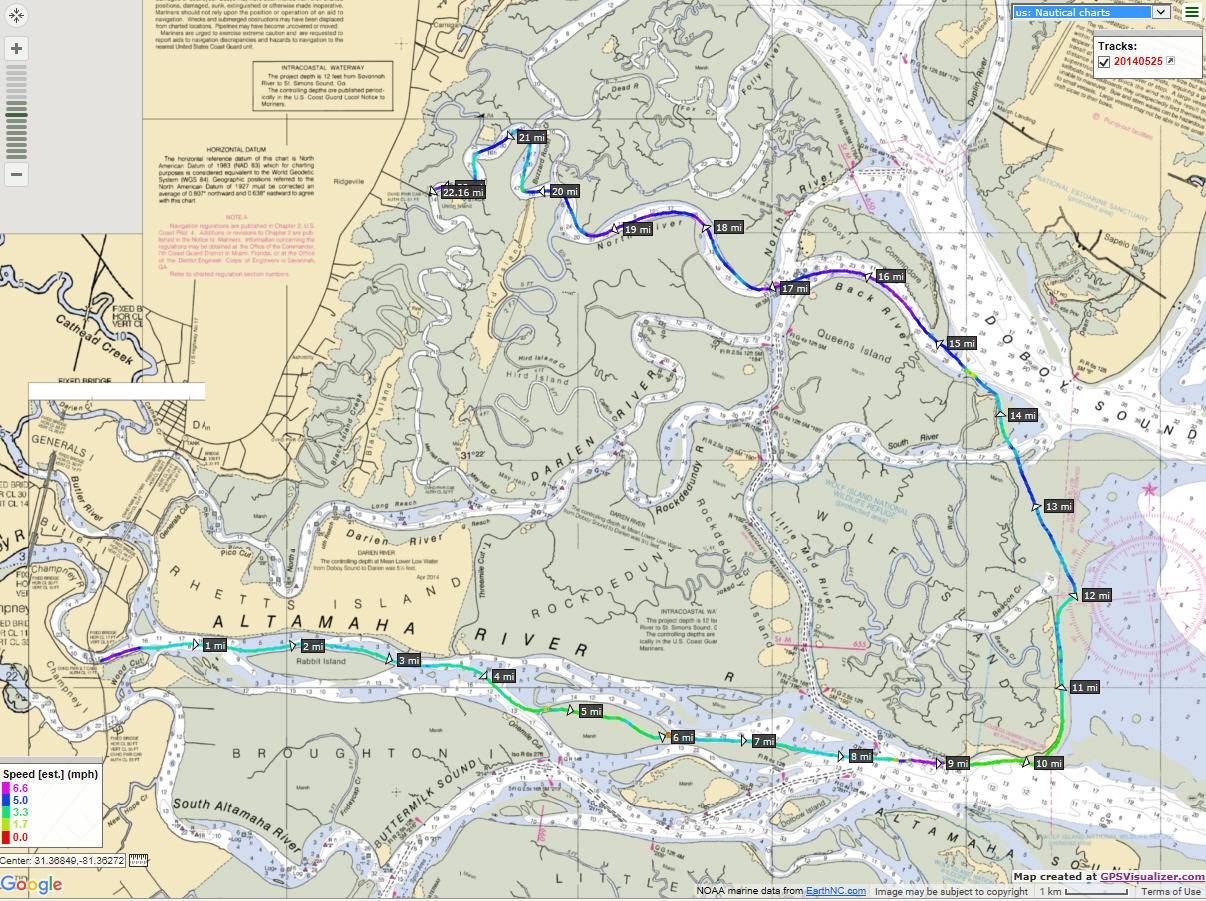 How long time wise, did it take you?

Those flies are worse than mosquitos and harder to kill.

mmmmm?.. We started paddling at 9:30 and were loaded in the truck, finished with shuttling, and on the Interstate back to the RV park at 6pm. I think we’d have finished sooner but we had a slow paddler along on this one. That and some body capsized while waiting for the tail end to catch up.

Raisins… It should look the same. Its the same paddle. We couldn’t do the hug the Wolf Island coast so much because the tide was really out. Water was getting less than floating depth at your 11 mile point so we worked our way out which aimed us to Sapelo. Then too since those with skegs couldn’t deploy them the wind made it easier to ‘head up’ and get high on the wind and wave.

Did you do the ABIS paddle?

@shiraz627 said:
How long time wise, did it take you?
Yes, what Overstreet said.
Typically, group paddles will be slower than individual paddles. (as slow as the slowest paddler (at the time))
The following show the ‘Altamaha’ trips I’ve been on with the club.
The times shown (and speed) include lunch and other stops. (they don’t include packing the vehicle & leaving):

Note: this area has a strong tide influence, make sure to get the tides correct. (out with the ebb, in with the flood)

@Overstreet
ABIS - yes, great time on ICW, miserable time on ocean, but it was prettier.

Looking at the pics, someone had a SOT?

@shiraz627 said:
Looking at the pics, someone had a SOT?

Hybred…one of those Eddyline sot. Still put up a big bow wave. Helps when the paddler is a tri-athelete. It was the plastic entry level boat that slowed us up. Beginners have to start somewhere. For every 10 drifters there is one that wants to do more and discovers their limits are greater than once thought.

One day I’ll do an ABIS paddle.