For many years I’ve attach 40"-48" float bags front and rear on my solo 14 canoe for paddling mild whitewater, but I’m tired of patching holes and refuse to pay $$$ for another air bag. Any other ideas? I’m thinking of filling several 20-40L dry bags with air and/or packing peanuts and stuffing them into a large net bag before securing them in a tested manner in at least one end of my canoe. Quality dry bags would not only serve two purposes but be more repairable. Thoughts? – Dave Redmon

I haven’t actually done it yet, so I can’t speak to if it actually works, but I bought a 40L dry bag and some cheap pool noodles which I plan to cut and stuff into the bag in the front of my rec kayak to create floatation.

Wonder if you could make custom formed float ‘plugs’ out of some combination of spray foam and chopped pool noodles. Basically a rigid float bag that would fit perfectly in the ends.

The spray foam that I’ve used, Great Stuff and other brands, is open cell. Once the water gets past the shiny “skin” it soaks it up like a sponge.

I used peanut yoga balls about $12 inside an army surplus waterproof laundry bag about $3. They were in the canoe over the winter in the cold Great Lakes region and this spring needed no air.

The peanut shapes fills the space better than the round shape but have used the round balls for under the deck in rec-kayaks and inflated them in place and they formed to the hull nicely. 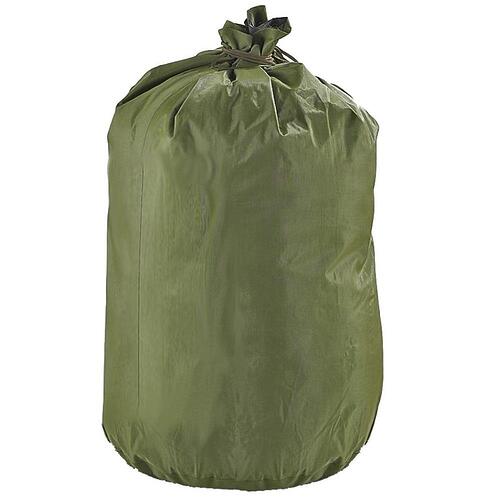 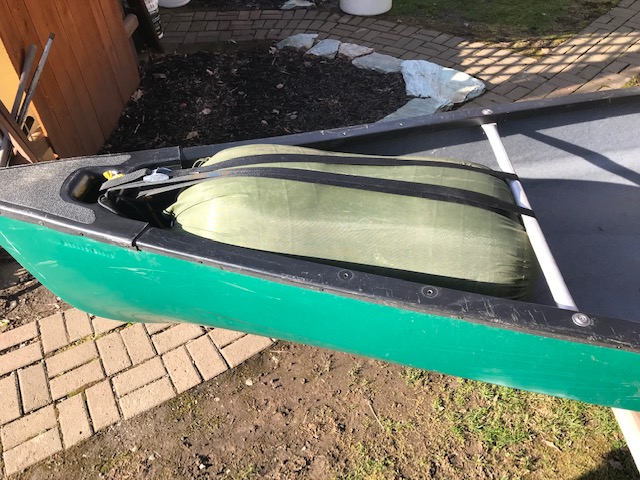 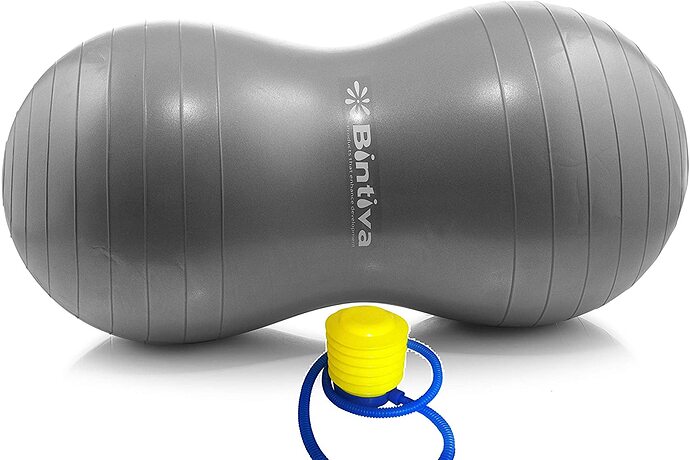 Endless Rivers has solid blocks, but shipping from the UK is quite expensive.

I like your ideas–especially that third photo developed by doulas! If you don’t mind me commenting on your second photo, I suggest cross tying your bag (zigzagging gunnel to gunnel) to prevent the bag’s escape when it’s needed most. --Dave

so I just spent yesterday helping 2 other folks getting a canoe off a rock (pinned). It was a Bell Yellowstone. I commented to the owner before we set out that it would be very difficult to get to shore if he and his son flipped. We had to leave the boat because we were on a time constraint- We were riding a tram out (bluestone river wv)… The whole ordeal could have been avoided if the boat had air bags. Literally the only way you could see the boat flushing down the river was because it had a dry bag loosely tied in. The hull and seats are ok but the gunnels and two thwarts will have to be replaced. My thinking is simple- if you are taking your boat on whitewater just bite the bullet and replace the boat with some decent floatation made to fit the boat. If you are not doing ww then the alternatives are suitable. Either way secure the flotation. Float toys work pretty well in kayaks (closed space). Canoes are tricky. Ideally you want to not only displace water but also keep the boat floating high. .

When I mention planning to fit some pool noodles into a 40L dry bag, it’s for a rec kayak that is ONLY taken on small, flat water lakes. No moving water, and definitely no white water. The two people I kayak with consider me to be ridiculous for even wanting to add some floatation to the front of the one kayak because they’ve “never flipped before” and think they don’t need anything like that.

I should have mentioned in the above post I’m very much a flat water canoeist and the DIY air bags are there just for such use. We do slower deeper rivers and capsize is unlikely but I’m one that never says never. Water displacement after reentry is key and getting the boat in to be drained or bailing is the main function of why I want the floatation.

As to lacing the yoga balls in gunwale to gunwale I originally planned on drilling and doing loops but found the single cam strap doubled like I show it held the bags in securely and are very quick to get the bags in and out for cleaning or whatever. There is no way for the bag to get out laced that way even wet and cooled down.

One thing I found is with the ball contained in the bag I can fill it pretty firm and what that does what regular bags don’t do is it stays full depending on temperature changes. The hand pump that come with them works good for filling but I use my air compressor as it is quick when doing it at home.

Northstar Canoes’ airbags are surprisingly inexpensive. I wouldn’t use any DIY alternative that would add even more weight to my boats.

Weight is a valid point and if a couple pounds are important that should be factored in.

Could try PVC pipe, one on each side held in place with 2 cross beams.

This set up would be fine in some circumstances, and the peanuts are as good as anything else that holds air, but there is a strong chance that the whole bag would be forced out of the boat in any decent whitewater and certainly if you went into a hole. A bag cage would be preferable and you could easily do this by adding straps across the bag from gunnel to gunnel.

I agree the better it’s held in the better it will work. I thought a lot about doing exactly what you suggested and first thought to test the cam straps to see if the bags provided enough floatation to work etc. Each one is about 5.5 cubic foot or 11 cubic foot total. I wont say they could never pop out but it would take some doing and much more than I’m planning on trying anytime soon.

My canoe is 14’7” long and set up as a solo with a fairly large cockpit area for me and still leaves two areas bow and stern with more than enough areas for my gear.

If I was building a WW boat it would be totally different and much more floatation. As it is I still have a little room for side floatation and I’m debating about adding some.

Go to a tire shop and buy a used innertube. Put it in the canoe mostly deflated, with the valve stem accessible. Inflate until it just fills the space. Not pretty, but durable and cheap.

I use NRS small float bags in my Phoenix. I went to BassPro and bought a duck decoy bag that feels like rubber and I put my float bags in them. I canoe with my Boykin Spaniel and his nails cannot put holes in them.