An argument for smaller and lighter

Lately I’ve been going on solo paddles on the small river near my home. Rather than take my longer touring kayak, I’ve been using my 35lb. Eddyline Rio. At 165 pounds and 5’10”, the boat is a snug fit — I had to remove some of the seat cushioning to give me a comfortable fit.
The Rio, with its 11’9” and 24” beam, is surprisingly efficient. My average speed may be a few tenths of a MPH slower than with the longer Stellar, but the ease of handling and the closer proximity to the water it affords makes up for it. I also like to explore inlets. With the shorter boat, I can be more nimble in these situations.
I’m wondering how this small kayak would be on more turbulent, faster moving rivers with barge traffic? With a spray skirt, of course.

The manufacturer recommends using it on Class I & II rivers, lakes, ponds, and inshore waters. It has fore and aft bulkheads and will accommodate a spray skirt. Lacks a skeg or rudder so I’d avoid larger bodies of water where wind might be a serious issue. I’d extend the grab lines all the way to the bow and stern, easy and cheap enough to do. Also add a painter.

Looks like a fine boat if used as the manufacturer intends.

Thanks. What is a painter?

It’s a rope tied to the bow of the boat. Great for canoes but for a kayak, I prefer a contact tow. 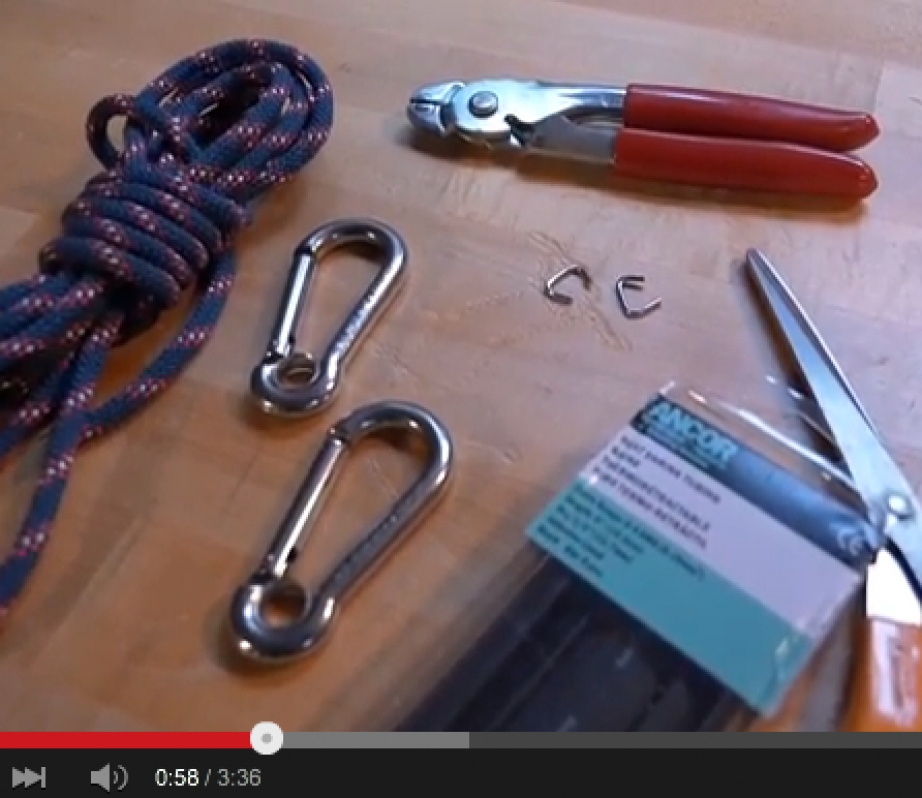 A very useful part of every sea kayakers kit. A contact tow line can sit conveniently on the deck of your kayak. Learn how to build your own in this video.

The painters were originally the holes at the bow and stern that were used to hoist the boat up to paint the bottom .

Now they are used to fix a line abound the boat for emergency usage.

They are also good for bow and stern lines.

I like to drill a 7/8 of an inch hole high on the bow and glue a piece of 1/2 inch PVC through it. To make thickened epoxy work you have to rough up the outside of the PVC. Sand it smooth and it can do many things.

I saw someone successfully paddle a Rio in some very turbulent water in San Francisco Bay at the Paddle Golden Gate symposium. The paddler was a newbie but she and the kayak did just fine. This was under a coach’s control, of course.

I guess because my longer kayak is almost 10 lb lighter (18’, carbon) than the two shorter ones (12.5 and 15, rotomolded) I would almost always prefer to paddle the long boat. I took it into the mangrove tunnels at Weedon Island preserve last weekend (which I have done many times before) and freaked out two paddle boarders who thought I was not going to be able to get out! When I told them I was on my 3rd lap through the trail that day they were a bit surprised!

Paddling in San Francisco Bay in a boat of any length would be daunting.
That’s a great story, the mangrove episode.
As we age — at least in my case — the weight of the kayak becomes the most vital stastic.

I have been in some narrow Mangrove tunnels where a short shaft canoe paddle would work better than a kayak paddle for a kayaker. Of course if the kayak paddle is 2 piece one could paddle with half the paddle. Have you had to do that?

I did that on the one paddling trip I took to Florida – we paddled upriver into the glades from one of the canals off the inlets at Everglades City near Chockaloosa. We’d rented one of those odd Mad River Adventure plastic tandem canoes that is a bit like a sit on top kayak with elevated seats but asked for 230 and 240 cm kayak paddles instead of the proffered canoe paddles (since that’s what we used with our Old Town tandem back home). As we worked our way back into the winding channels with the overhanging branches and spider webs, we ended up splitting the paddles and using them as single blades so they would not catch on the overhanging stuff. However, being in the the bow seat I ended up reassembling my paddle so I could use the upward blade to clear the webs ahead, this after getting a rather large and startled arachnid that dropped into my cleavage as we were floating under him.

Similarly, when I took my little 12’ folding Pakboat kayak to the UK to paddle narrow winding streams with a lot of overarching shrubberies I discovered that the 4 piece Cannon breakdown paddle I’d brought (it fit in my airline baggage) could be assembled with one half of the mid shaft omitted, which gave me about a 70" long double blade (like a Greenland “storm” paddle) that would clear the branches above ( and the critters perched on them) without getting hung up.

What is a painter?

A painter can also be used to tie off the boat. It is useful if you are on a narrow beach for a lunch break with an incoming tide or rising water where it’s difficult to get the boat up high enough. It’s also useful if you are paddling with a group and there is not enough room for all of the boats on the beach at the landing spot. Handy if landing on a low dock where you don’t want to inconvenience others by leaving your boat on the dock.

It’s also great if you have to walk the boat through shallow spots as you aren’t having to bend over using the front toggle or dragging the stern.

More convenient than digging out a separate line. Most people run a line from the bow toggle and use a clip or carabiner to the rearmost foredeck bungee. You can make the painter longer than this basic length by using a truckers hitch or similar knot to temporarily shorten the line used and keep it taught. You can use the same type of line as your grab lines.

Me Me!
It hurts to paddle with half a double. I do not have a T handle adapter.
I have a Fox Worx 46 inch bent shaft for mangrove tunnels

untangling a double gets old easy… and involves contact with spiders.

Chokoloskee Willowleaf. You almost had it. There may have been loose boa constrictors in there too. ( which I have never noticed; doesn’t mean they aren’t t here). I have had spider in the face and luckily not elsewhere! You must have been on Turner River

Indeed a short shaft canoe paddle is better than half a double blade.

There is a certain section of the paddling trail at Weedon Island that I always break apart my paddle. It is very narrow, especially when the tide is low. Just enough width to pass two kayaks. It is short, though so not enough time to justify bringing a canoe paddle. 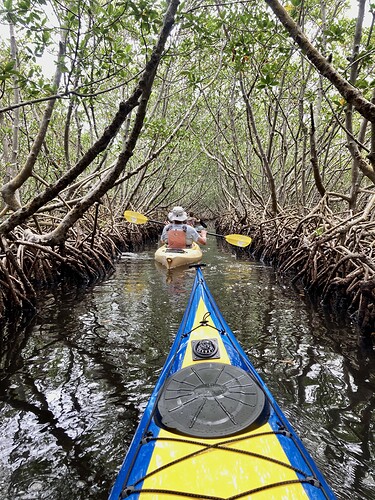 It was actually the southern end of Halfway Creek. Most of it looked a lot like Brodie’s shot from Weedon Island though less channeled and more twisting. Went past a few cow pastures but mostly dense thickets. Did not have the variety of flora and fauna the northern reaches of Halfway (off the Tamiami Trail) are noted for.

I’m not freaked out by snakes or spiders, but getting webs all over me (and things skittering over me) is unpleasant. More “yuck” for me than “eeek!”.

We have done the Loop Trail from the Northern end twice. Last time was the year after Irma and the mangrove tunnels were a challenge… and some trail markers gone… thank goodness for GPS. We got back and went to the Big Cypress Visitors Center and they told us we were the first through it post Irma. I got a LOT of facefuls of spider.

Havent done the other end at all. May do that next winter if we just day trip.