Anchoring 16' canoe on a Chevy Colorado

I just bought a 16’ canoe that I will transport on a dual cab Chevy Colorado with a Yakima rack on the Leer shell that covers the bed. I have never before hauled a canoe that was shorter than the vehicle, so I am trying to figure out what works best. The back half is easy, with two straps on the Yakima rack and one to the bumper. On the front half I have two foam blocks over the windshield, and the bow of the canoe is over the windshield wipers. The canoe is over the passenger side of the truck, and the kayak is over the driver. With two hood anchor loops, the straps are angled back and flapping right in front of the windshield, which is annoying. About 25 years ago on another vehicle, I had a strap that went through the doors and over the canoe, which was also annoying. Any good ideas out there?
Thanks,
Jeff 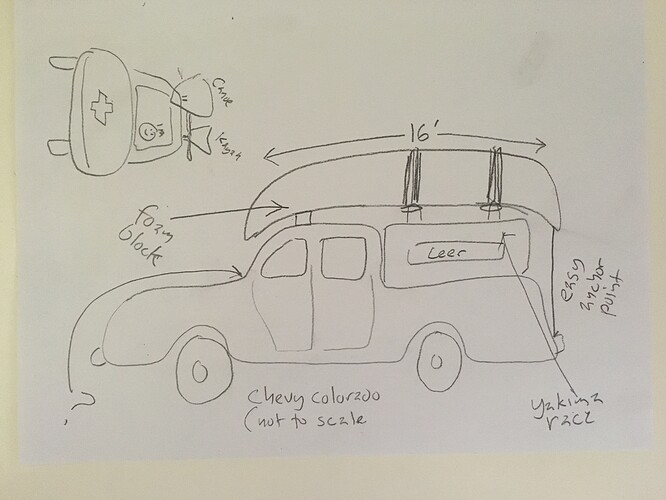 If you put a few twists in the strap that goes from the front of the chebby to the fozzy glock they wont flap as much.
Other than that, you could haul it open end up and pull it to the rear letting the canoe overhang the bumper and strap it on the rack.

I may be missing something obvious, but why not just put a roof rack on the car instead of the foam blocks? Then you can secure the boats to the roof rack and get rid of the straps.

(With sufficient distance between racks, the straps to front and rear of the car is not really needed, because the distance eliminates the torque reactions from the forces at the ends of the boats. Of course unless there is some law saying otherwise at your location.)

I just run the two straps over the hull on my 2012 Durango and it’s good up to 69 mph. I was running some lines down to the hitch but they weren’t accomplishing anything. The canoe vibrates in the wind but doesn’t walk. If I knew I were going on the expressway, I would probably put some tabs along the sides of the hood. Also, watch out for tire wear against that front fender.

I’m not sure what your foam blocks are doing. Be careful because if they move around at all they will scratch your roof (although perhaps no one will ever see it). As mentioned if you put a half twist in your front straps they should quiet down and stay put. Or you can use rope…you only have to learn one or two knots (trucker’s hitch). I’d be tempted to do what Allan says and get one real bar for the front of the cab and then support the canoe on the front bar and the rearmost bar on your cap. That would give a really long and stable span between bars and eliminate the need for bow lines or straps and make loading/unloading even more effortless.

I have a knot in the line, so at the end of the hood it would not be a problem, but the line is hard to ignore just six inches from the glass. Also, although the rocker is not extreme, any farther back and the bow would be poking into the roof of the cab.

The two bars on the rack are mounted on tracks built into the shell, and in addition to the obvious complications of mounting a third bar, the expense for additional equipment would further irritate my wife.
Although the canoe feels secure with only the back half tied down, I worry about vibration.

flip it, open side up. The bow wont hit the roof. Let the stern hang off the back, center the widest part of the canoe over the center of the rack, strap the canoe to the rack at the bars. Tie bow to front rack, and stern to rear rack with rope. If you are not past the bumper by 6’ (your states distance may vary) you dont even need a flag.

The bow and stern lines are not only to secure your boat, but they serve to protect others as well. In an accident many times the entire rack will fail sending your kayak like a missile off the roof of your car. It is much more likely that the rack will fail than the nylon straps will fail. I’ve gotten used to the lines in front of the windshield.

Additionally, most rack manufacturers require bow and stern lines be used to validate your warranty and cover damage to your boat if the rack ever fails.

Carrying the boat right side up will dramatically increase wind resistance and in the event of heavy rain, without a cover, can quickly result in hundreds of pounds of water accumulating in the canoe, possibly exceeding the load capacity of your rack and roof. I once had my kayak on my truck rack with a worthless cockpit cover that only served to keep out leaves and critters larger than a raccoon when I drove through a heavy thunderstorm for a couple of hours on the way to a launch site. When I got there I couldn’t understand why my kayak couldn’t be moved after I unstrapped it. Turns out that the cockpit had over 4" of water in it. Spent some time pumping it out before I could take it down.

Not a big fan of foam blocks for reasons already mentioned. Just buying towers that will work for the front crossbar you already have shouldn’t be too expensive, especially if you can find them used. Would be kinder for the canoe and rack.

I would center the canoe over the rack not over the vehicle. Most canoes do not have the amount of exaggerated rocker shown in your drawing. Make sure you run a line from your front bumper to the front of the canoe and one to your kayak. You probably will not need foam blocks. Secure your boats to your rack. I like rope best with a trucker’s hitch. Some people like straps. . Do not use straps with a ratchet.

The two bars on the rack are mounted on tracks built into the shell,

Yes. Doesn’t really matter. Unless there is a law stating that the third bar will have to be the same type, which would surprise me a lot.

and in addition to the obvious complications of mounting a third bar, the expense for additional equipment would further irritate my wife.

Can’t help with that.

I would center the canoe over the rack not over the vehicle.

That would make his problem worse than it already is. Already now, the bows of the boats are so far back that he has trouble with the front securing line. Moving the boats further back will enhance this problem.

So many ideas. Thanks folks. Although a third rack bar sounds best, since I am not planning any long trips, and to keep my wife happy, that expense will need to wait until next year. Provided I was on a day trip with no rain in the forecast, hauling the canoe hull down on my Yakima Evenkeel saddles would work, anchoring the bow with hood anchors through the back doors, but then I couldn’t take the kayak.
So, I had a couple of crazy ideas that no one has yet mentioned. With the hull up, provided that I only had a dog in the back seat, I would have a strap to the back bumper, straps on both racks, then maybe I could run a strap through the back seat that goes over the canoe, and use my two hood anchors near the top of the windshield of the front doors to strap the bow. Then, with the front doors closed I could probably hang out the window to tighten the bow strap, or maybe just anchor from the back door without hanging out the window. Thoughts?
Jeff

Due to criticism regarding the accuracy of my drawing, I have attached two photos. In addition, although I only remember that strapping through doors is annoying, I have also heard that such might allow rain to leak into the cab. 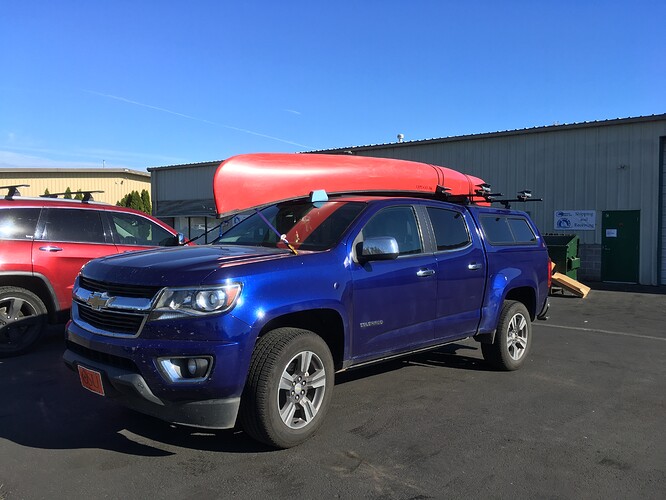 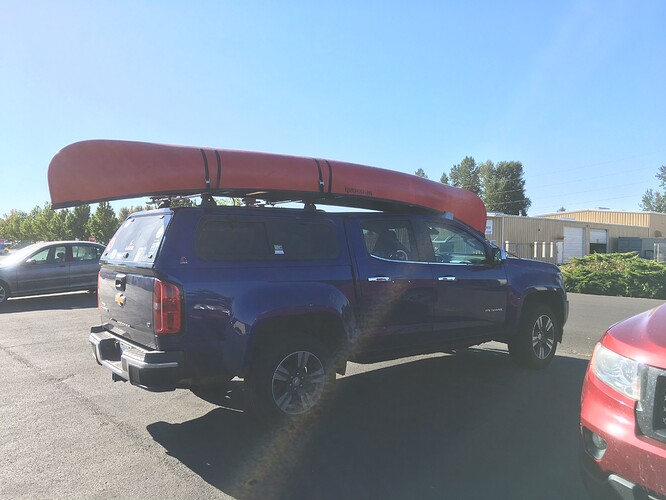 How are the front straps secured under the hood? At that flat angle, any vertical force from the boat will multiply quite a lot, so you get a lot of force in the straps.

For our voyage home, since I had no options other than angled back, although not too flat, because the anchors wanted to slide back toward the windshield, and that part of the hood is mostly rubber and plastic, I had to go forward of the hood lift supports 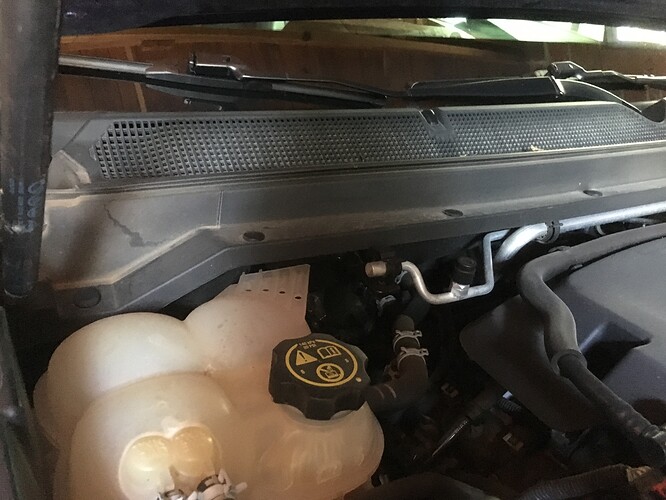 It’s always an emotional topic. With a bar on the cab, another on the cap and a safety line on the stern he’d have to have two rack failures plus a strap failure for the canoe to leave the vehicle. I’m not against bow lines but canoe manufacturers and delivery services don’t always use them when the rest of their system is robust.

You might keep an eye on Craigslist or Facebook marketplace since bars and racks often turn up used at good prices.

There are often more anchor points underwood than it seems like. I use Kevlar “pulling tape” for bow anchors since it’s skinny and floppy so it fits easily in hood gaps but it’s also strong and you can tie it to just about any structure you find in the engine compartment.

The biggest problem I have is how far forward the center of gravity of the canoe is. I think that if you slid it backwards a few feet, it would not touch your roof and would ride better.

Air pressure will push it downwards and strain the gunwales, in this configuration. That will also put more pressure on the racks and the caps are not that well built. I have seen quite a few of them that cracked and broke because of the stresses of hauling a canoe.

Make sure you have plenty of support on the underside of the cap.

Due to criticism regarding the accuracy of my drawing,