Both ends, too. Anybody know if there’s a kind they don’t find tasty?

I store the yak upside down on a wooden pallet, and have nowhere else to put it. 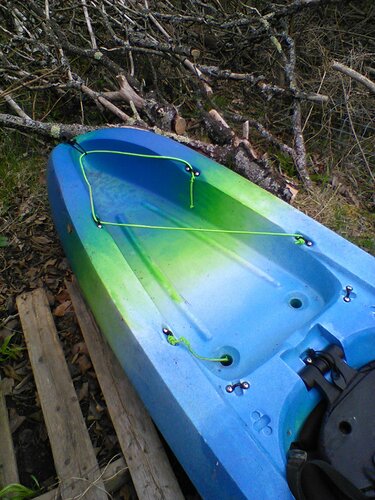 Feed the animals then they won’t eat your bungees!

Mice or squirrels will eat anything . Maybe you had peanut butter on your hands the last time you touched it.

You’ve got to get it up off the ground if you want this to stop.

What about moth balls? I think I heard something about that. Also, whoever ate the bungees showed no interest in my painter, which is buoyant yellow poly rope.

I suspect there may be bungee material of a different formulation that they won’t like, but I don’t know how to determine that.

They will eat anything they can sink teeth into if they have the urge… including the actual boat. Take the bungees off or store inside.

I have a bunch of crap outside on side of garage waiting for a shed. There’s some leather, a collection of buoys found on coast (foam), an archery target etc etc… lots of good stuff for rodents. The only thing they touched was a Rubbermaid plastic tote. Gnawed off one of the molded in handle grabs… fairly substantial piece of plastic, completely flush with the tote.

I’ve gone on bike ride/ hikes where my helmet and grips where totally trashed when I returned to the bike a few hrs later. Sometimes they are untouched after weeks.

Feed the animals then they won’t eat your bungees!

In all my years living where there are an abundance of squirrels, mice and other vermin, feeding them just increases the population and increases the problems.
Extreme sanitation is a better route.

I’ve spent the last couple of weeks hauling windows, doors, and other junk out of a shed attached to the side of my garage. It was a mecca for rodents and had piles of chewed up materials mixed with droppings and ??? Once it was cleaned and aired out, I fixed a hole in the floor then used five cans of spray foam filling every crack and crevice a rodent or insect could get through (one summer wasps built a nest inside).

The shed measures 17’6" by about 5’. My longest boat is 17’, so I have a tiny bit of wiggle room. This fall the snowblower comes out and the 17-footer will be stored in slings on the solid wall. The 16-footer will be on stands against the other wall. The lawmower should fit between them. At least that’s the plan. Haven’t tried getting either boat inside it yet.

Tomorrow I’ll leave a few Cheerios on the floor to see if it actually is rodent proof. 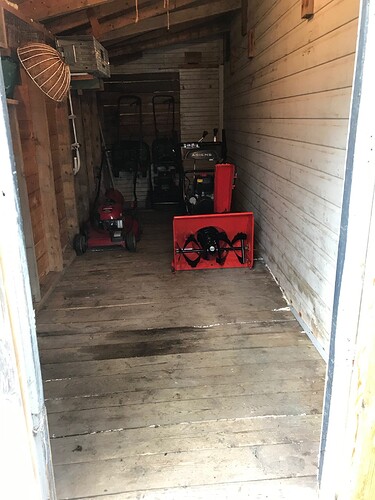 Salt ,as from sweaty or foody hands, is a guaranteed rodent attractor.

Do you paddle in salt water? If the bungees are dacron or nylon they would have absorbed salt water and been attractive to nibbling critters looking for the mineral – even with fresh water there could be organic material absorbed with the water that would be tasty. But the yellow painter, being likely polypropylene, is solid plastic and doesn’t absorb water (and the minerals or goop dissolved in it) hence the lack of attraction as a snack.

Actually you should replace them every year any way. They age and get weak.

Spray foam won’t do anything to keep rodents out. You are better off leaving out traps. You can see if they are there, and you remove them.

Re the salt thing, I have some buoys from the coast… foam covered in salt… that the beasties don’t seem drawn to.

I’ll have to replace them anyway now; they hold the grab handles at both ends. Or maybe I could just devise an alternate handle attachment and use something else to replace the bungees.

I don’t really need the bungees anyway, as such. I secure the handle of my dry bag with them, and my cane, but I can find alternatives.

And no, no salt, no sweat. I scarcely ever touch these.

Any idea what ate them? 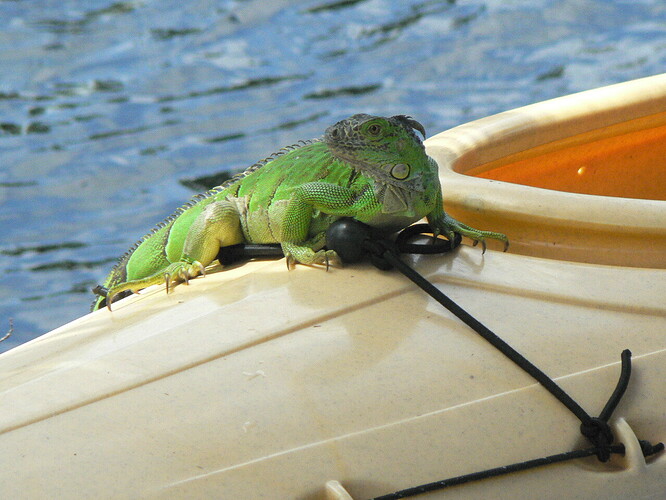 I hear they’re tasty. The critter , not the bungees.