We put off our annual February Au Sable river overnight trip for a week as the take out was iced up 4 days before the trip. We hit a great weekend for a winter trip with light breezes (mostly) and blue skies. Of course the blue skies gave us some cool temperatures Sunday morning. One thermometer in camp read ~ -3 F around 7 AM. Not a problem though as that was expected and prepared for. The day did warm up nicely though & was maybe 35 when we took out around 1 PM. Interesting that we had two well used burgundy Mad River Independence canoes on the trip.

Mine (OK, really my wife’s) 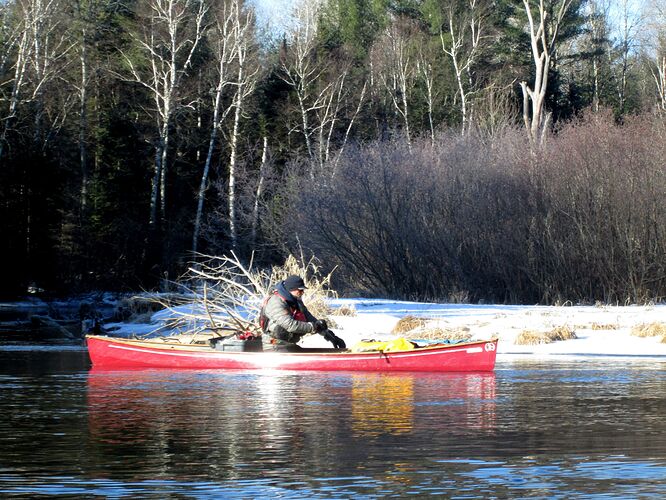 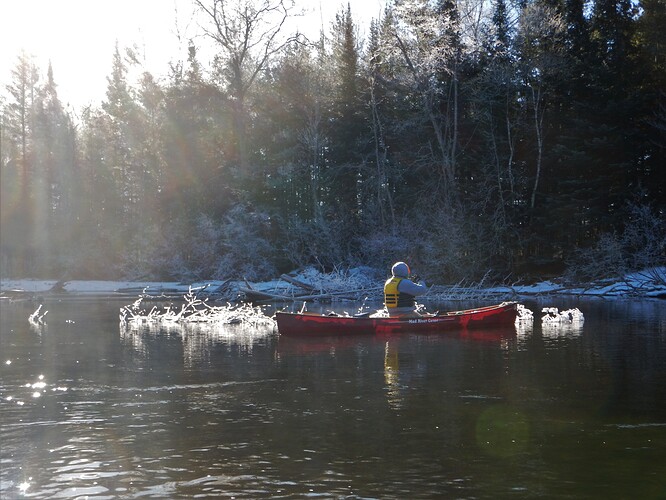 I have paddled the low desert in Feb but would chose a different month for Mich.

What sections did u paddle

Never been there. But, when I hear “Au Sable”, I think trout fishing. I think of Robert Traver and his wonderful books – Trout Magic and Trout Madness. I keep thinking that I want to see Upper Pennisula some day.

The UP is worth the trip! Mostly trees. Plenty of water. Beaches. Dunes. Quiet.

You’re spot on about the AuSable and trout fishing:

I think of this 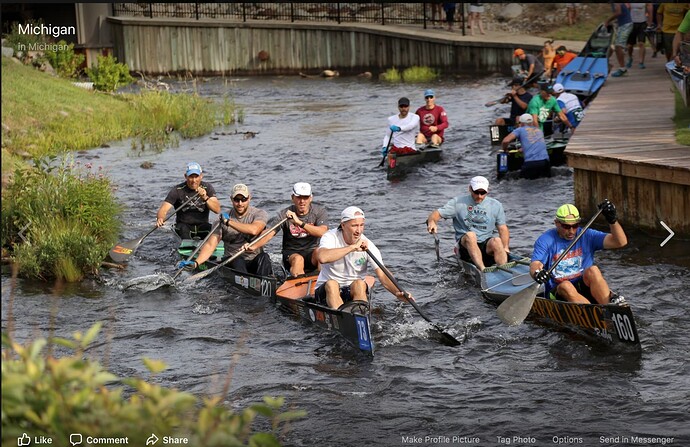 Someday, I’ll visit the UP. I’ve been to Detroit a couple of times. Sorry, would hate to think that is the last image of MI when I pass… LOL!

Seeing those folks working and going at it so close to shore… I want to be handling standing on the side and offering cans of PBR as they go by – “Hey, have a COLD one on me!!!”

That’s me in the bow in the white shirt of boat #73 so just make sure I get the first and coldest one ya got!!

How cool is that! I’ve followed that race every year and LOVE this video for its inspiration for just about everything: 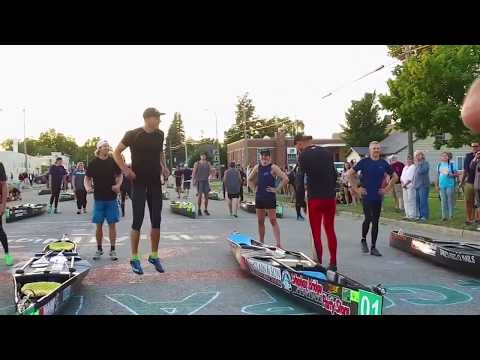 One of the coolest moves ever is at :39 seconds of that above video. Steve lajoie (stern) breaks a paddle on his sprint and grabs his spare without even missing a paddle stroke.

Here’s their sprint video from that year…2017. The break is about :28 here on the upstream portion of the sprint 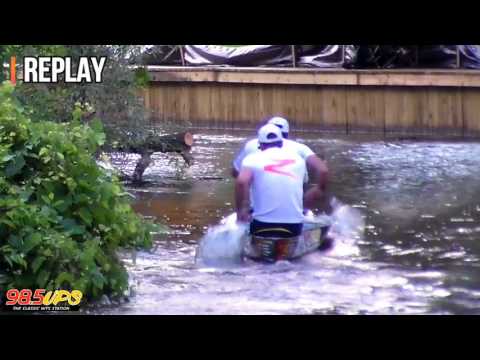 So smooth and fast. I would have missed were it not for your comment. And the replay.

So, the original posting was about last years paddle. My friend Jay had done these for ~40 years or so, starting solo as he couldn’t find anyone crazy enough to go along. I’ve been going for maybe 30 years. This year we ended up passing on the trip. The take out eddy at Parmalee was iced in on Friday with big chunks of ice going down river. Elder care issues meant that Jay couldn’t easily reschedule an overnight trip. I set up both a day trip and an overnight trip on the Manistee this coming weekend (March 19 - 20, 2022) but I’ve passed on those due to a funeral on Saturday. It does look like there are a few still going though.

@darkstar the section we do for the winter trip is Grayling to Parmalee with camp at White Pine. At best we do 1/2 the speed of the racers. It’s not unusual to see black boats going upstream faster than we are going downstream. Of course we do have full camping gear and the canoes have 20 - 40 lbs of firewood. The funniest thing that we have seen on the trip was during lunch at Burtons. It was a really nice February day, partly cloudy, light breeze and maybe 25 deg. A young couple showed up looking just right with a carbon pro boat, a couple of Zavs, and dressed in running clothes. If you know Burtons, you know that there is a moderately grabby eddy line t there, especially if you are trying to pop out and go upstream. Between the eddy line and being pushed around by the current they flipped three (3) times. I felt bad for them the first time but rather less so as the fun went on. Fortunately the van was up in the parking lot so only minor concerns about hypothermia. February in Michigan may not be the best time to learn how to paddle a Pro Boat.

Haha thanks we def held the line there!

Hey, while on the topic, I’ve been planning to kayak the full length of the AuSable over the course of a week or so, hopefully this summer. My family has a cabin just below the Parmalee bridge. I have a friend who might join me, with his SUP. I’ve never seen a SUP on the river, and he has asked how wide and deep the river is where we would start, which would probably be Grayling (I’ve checked out road crossings upstream, and was thinking about starting as far up as I possibly could with a junky kayak, before switching to my better one). Anyway, he could join me farther downstream, but does anyone here know the width and depth at Grayling?

It’s not very wide in grayling but gradually builds in depth and width to Mio dam.it’s bigger below… the upper section is twisty with braided riffles n runs, not too deep but sufficient enough for a sup. That photo I posted above is just below the dam in grayling. The boardwalk you see people putting in at is at the fly shop