Another activity to ward off cabin fever

The maple sap has started to run. I just finished tapping some trees and now hopefully will have 5 or 6 weeks of making maple syrup to keep me busy.

Thought I read there was a shortage of maple syrup due to natural reasons last year or so?

Warm up there? Around here (South Central Michigan) March is more traditional (looks at the 2 week forecast) but the run might start next week.

The season was crazy short last year. The warm day cold, night cycle didn’t start until late February and only lasted about 3.5 weeks. (At least in my neck of the woods). This could have resulted in lower yields in other areas as well

Calling for warmer days in the forecast. May have some no-flow days but it looks good for now.

I think that was it. The price of real maple syrup shot through the roof. I don’t eat French toast or waffles much, but do enjoy it after a dawn patrol surf or paddle session. I remember getting “Log cabin” syrup as the default in of my favorite breakfast place. Had to ask and pay extra for real syrup.

I can’t stand the fake stuff. Tastes like uncarbonated Pepsi to me now.

Sorry. Hopfully, you can feel my pain then.

Unlike you, I have to depend on others to get the authentic amber elixir to complete to a true “north country” breakfast.

Sing, I remember as a kid, Log Cabin had 2% maple syrup. A family member challenged me, so I looked . . . Well I’ll be dad blamed. Nary a drop. Those were the days when you could get a maple fix on a two percent solution.

So the “thing” is that for those have not had real maple syrup, it wouldn’t be missed.

I think I finally had real maple syrup, years out of college. Went up for a downhill ski weekend in Vermont at a B&B. Had a real maple syrup for the first time. What a relevation. So, this is what the big fuss is all about.

Real maple syrup is really good indeed. Costco sells a nice size container of it for a good price. It’s honestly one of the better deals at Costco.

By the way, I hope you aren’t saying you sit and watch as the viscous syrup slowly makes its way to the container

That’s nothing. I sat and watched a wash cycle when I got my first front loader wash machine. I’ve also wondered why dust is always drawn to sunlight. You never see it anywhere else. Must be magic.

I like both real and “fake” syrup, but the real stuff is definitely better. When I was a kid a distant family member used to make syrup so we usually had a pretty good supply. It’s fun to watch the big vats boiling away!

I grew up in MA but spent summers (and many fall and winter weekends) in central NH.

I gather it up and sit in the garage for hours and hours boilling down the sap until I can filter the syrup into bottles. I break the tedious task up by drinking beer and good rum.

I had some commercial varieties and wasn’t impressed. I have heard Costco’s was a good price. My cousin up around Johnston, PA had a number of maples that he tapped and made syrup. It was spectacular. So much better that the commercial brands I tried. My daughter gave me a bottle from her trip to New England. I didn’t refrigerate it. I didn’t read the label, and didn’t know any better.

I grew up in MA but spent summers (and many fall and winter weekends) in central NH.

I used to spend a bit of time in Hopkinton/Contoocook, where my older sister had a pond front cabin. Used to drive around a bit around that part of NH to ply the rapids of the Contoocook, Ashuelot, Souhegan and lowr Pemi for trout and smallmouth bass. Memories of pre-marriage and kids days.

I break the tedious task up by drinking beer and good rum.

Newfound Lake! Where I started rowing (which morphed into paddling many years later) and sailing. 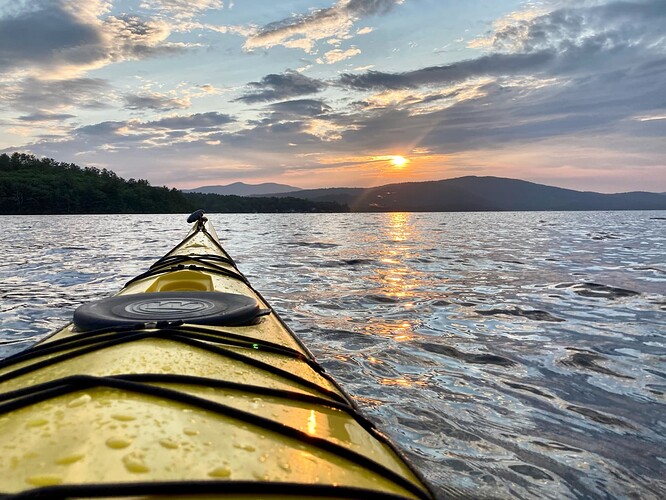 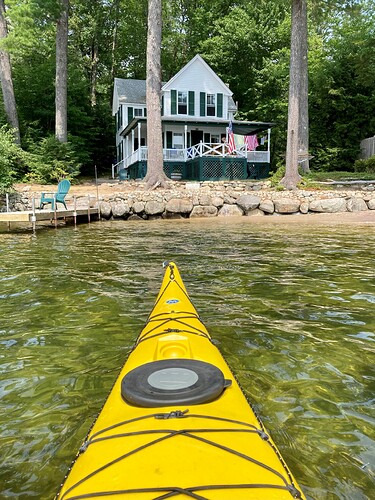 Too bad that doesn’t work on oak trees.
Down heah our syrup is from sugar cane. When I was young my Dad would bring home a stalk and cut it into short pieces. We’d split those into quarters and chew them.
We thought they were great.