Another dam bites the dust

…and another portage avoided. I paddled a section of the Pawcatuck River in RI on Sunday where the old Bradford Dam was recently removed. The dam was a stone and timber structure built sometime between 1819 and 1846 to divert water to the nearby Bradford textile mills. Built on top of a natural falls, the 6-foot dam spanned the entire width of the river. Here is the old dam from a 2016 picture: 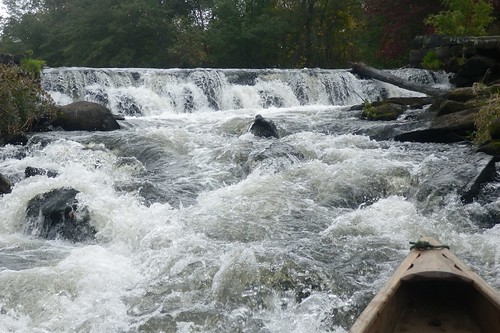 Since removing the dam would drop the water level upstream by about 5 feet and negatively impact wetlands, the decision was made to replace the existing dam with the new rock ramp structure. Here is the new dam: 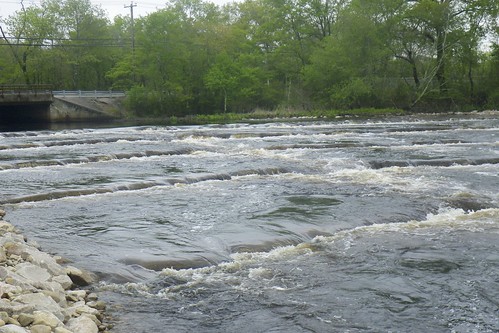 The new dam is made up of 6 gradually ascending stone weirs, which serve like terraced steps – each drop about 8” to 12”. Pools between the steps give fish a place to rest on their way up the falls. Gaps in the weirs create channels for water to flow, including the main current down the middle that forms a nice channel for paddlers. Here we are running the new dam:

In the past 10 years three other dams have been removed on the Pawcatuck, all of which result in a much better paddling experience. 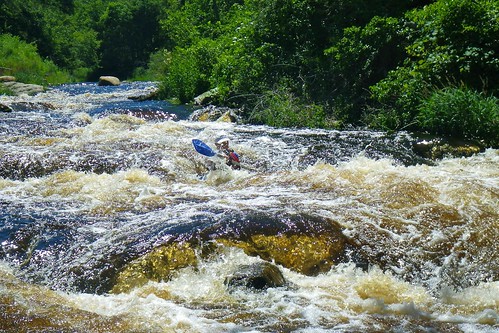 Kenyon Dam (another ramp structure built on the downstream side of the existing dam): 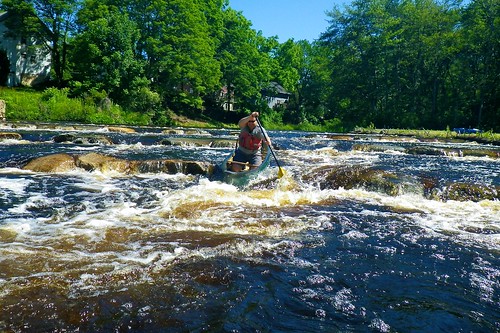 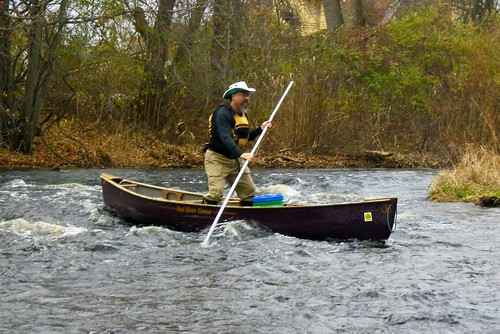 Combined with 2 fish laldders, this has apparently opened up 31 miles of the Pawcatuck River to migratory fish. A lot of this was paid for with flood control mitigation funds - however they did it, I like the result. Few more pictures of Sunday’s trip here:

Very cool. Makes me want to run it and then fish it.

Who says man can’t improve on nature? But I guess technically, this was man improving on man’s handy work.

That’s pretty cool, including the part about maintaining the wetlands upstream. Those wetlands aren’t “natural” of course, but these days losing any kind of wetland is best avoided.

Around here, dams have been removed here and there, and on these rivers that always means that a big flat plain of sediment becomes exposed which never used to be there, and the river immediately cuts down into that until at its former elevation. That dumps a huge load of new sediment into the river downstream and creates ugly, erosion-prone banks on the re-established channel. I’m still all for dam removal, but the resulting situation in the short term is never perfect. It was neat that they were able to avoid having the river cut into old sediment in this case (and I assume that sediment is what comprises the wetlands which were saved).

Great pictures and to see that a somewhat more “natural” flow of water is restored. Similar things being done here in the eastern UP to help return the flow of the St. Marys which should help reduce the sediment build up.

Hope to someday, spend some time on the Boardman River in the Traverse Bay area. They have/are removing 3 old dams that confined 160 miles of river and created a large man made lake. The lake has gone and the natural flow of water is already returning where the work is already done. Wet lands are already recovering, and saw an article where trout are being found in greater numbers. Also a more diverse population of wildlife is using the area. Much of the work here in the EUP and in Traverse Bay area is in conjunction with the tribal governments.

Big brother who is not a fan of these projects, does admit that the Boardman River as it runs through the Traverse City proper on the way to the bay appears to be in noticably better shape even after just 6 years ago when the project took down the first dam.

@magooch said:
Who says man can’t improve on nature? But I guess technically, this was man improving on man’s handy work.

True it’s not a natural wetland, but it has been there almost 200 years, so it is pretty close.

@Guideboatguy said:
Around here, dams have been removed here and there, and on these rivers that always means that a big flat plain of sediment becomes exposed which never used to be there,

That might be less of an issue around here since many of the dams are relatively small since they were built on small rivers to power small textile mills. Sediment is still and issue of course - usually because it is contaminated with heavy metals - but the the river bed is usually quickly restored.

@Yooper16 said:
Hope to someday, spend some time on the Boardman River in the Traverse Bay area. They have/are removing 3 old dams that confined 160 miles of river and created a large man made lake.

Great video - I watched the hole thing. That is a much bigger project than the typical dam removal around here. Folks around here with waterfront property on lakes would really fight that type of dam removal. Where did they get the funding to do it - that must have cost a lot. Even a small dam around here is a couple of million to remove.

the primary website http://theboardman.org/ tells of the genesis of the project. This area of Michigan, while politically conservative is also very supportive of envriomental efforts as they also know that the reason they have the financial success they do is because of the quality of the water and air and the draw that creates. Some of the best internationally acclaimed wines now produced in the US, come from this area. Lotsa monied people up there.

@Yooper16 said:
Hope to someday, spend some time on the Boardman River in the Traverse Bay area. They have/are removing 3 old dams that confined 160 miles of river and created a large man made lake.

Great video - I watched the hole thing. That is a much bigger project than the typical dam removal around here. Folks around here with waterfront property on lakes would really fight that type of dam removal. Where did they get the funding to do it - that must have cost a lot. Even a small dam around here is a couple of million to remove.

Homeowners did fight it, to no avail. And many homes were damaged when there was a dam collapse. http://www.mlive.com/news/index.ssf/2013/05/dam_collapse_63m_lawsuit_claim.html

While it’s true there are wealthy retirees and full/part time residents in Traverse City, its uncontrolled growth has resulted in lots of problems including a lack of affordable housing, difficulty in finding people to work in the service industry because of housing costs and low pay, traffic/parking gridlock, homelessness, and more. Typical big city problems. Away from the confines of TC, the peninsulas are beautiful.

I’d like to see more of this. We’re barely scratching the surface in the PNW…

@Steve_in_Idaho said:
I’d like to see more of this. We’re barely scratching the surface in the PNW…

Wow - that is amazing. Big difference between that dam and most the ones we have here in New England. Most of the dams around here are small 19th century mill dams - couple of hundred feet wide and 10 to 15 feet tall is a good size dam. My home river the Blackstone in Rhode Island is a good example. There are 11 dams in about 20 miles with a total fall of about 200 feet. Each dam might have produced 1,000 horsepower and supported a single mill.

Also, around here there are very few houses actually on the water. Between flooding and pollution, no one wanted to be anywhere near the river, so you don’t tend to have people who care about losing waterfront property on the impound behind the dam.

Taking out those big hydro dams looks like a much bigger issue. Our problem isn’t the size, but the number of dams that we have, and the polluted sediment that has built up behind them.

Rookie-- you’re right about the explosive growth etc in the area.

While I have no issue with progress, in fact I would like to see some progress come to the EUP, I guess I will almost always side with the “let mother nature alone to do her thing” point of view or when it is truly needed, help mother nature reclaim the area.

I first saw the video on a PBS broadcast a couple of years ago, and truly felt bad for the lakefront homeonwers who lost their lake front. And def. for the homeowners affected from the demo gone bad.

We have one left from the cancelled cross Florida barge canal. It was designed to trap water for the canal. Bass fishermen and the industry around them want it to stay. Environmentalists, including the St Johns River Keeper, want it removed to restore flow into the St Johns river without the evaporation from the lake. Lots of gators in that water. Every so many years, maybe 5, they draw it down to expose the bottom and kill weeds. The river gets real small then. It has been on the remove list for about 18 years, without a budget. So the dam is still there.

We have an old dam on the Reedy River that holds a Superfund site I’m place. A hundred + years of chemicals from textile Mills is held behind it. It is a happy home for beaver and waterfowl and a beautiful nature park.
Removing the dam would pollute several towns downstream.

String–at least for now leaving it up is probably the best bet. And hope the mother natures processes will eventually neutralize the issue.

We have a site essentially at the head of the lock area, that is the home to a dumping site of 75 years of tannery byproduct. Fortunately silt etc has covered the estimated hundreds of pounds of arsenic, cyanide, chromium etc.

Hopefully we don’t make the same mistake that earlier generations did by such uncontrolled disregard for air and water. I’ve always bit a bit of a tree hugger type, but the older I get the more I cringe at what we did and what was allowed.

@string said:
A hundred + years of chemicals from textile Mills is held behind it. Removing the dam would pollute several towns downstream.

That is one of the big issues around here. In many cases removing the dam is relatively easy, but cleaning up the sediments is very expensive, so the dams stay.

In many cases dam removal is indeed a good thing, especially for paddlers…and as Erik has pointed out with published info…there still is a lot of sediment that should be removed from out streams/rivers, wherever it is…some of the facts of cleanup that our society has somewhat forgotten since the 70s…however there are some cases where blind dam removal is inviting the destruction of quality salmonoid freshwater habitat…in the kind of habitat that existed before business and development were a part of the picture… namely trout habitat, which needs more riffle and pocket water…and by introduction of predatory fish, namely bass, pike and muskellunge…as access is allowed for all species of fish present to mix. Often this has the potential to destroy quality trout and landlocked salmon water in the upper reaches of river systems. In many cases dam removal is done under the guise of repopulation of atlantic salmon…a fish who have relocated to more healthy spawning waters…where human activities and businesses have yet to encroach upon(imho).