Just one day after this pic was taken and one mile upstream from the location of the pic. Also within a mile of where an experienced kayaker died 2 or 3 years ago. The river is relatively calm but still challenging for upstream paddling and not suitable for swimming. I’ll be on that stretch again tomorrow. 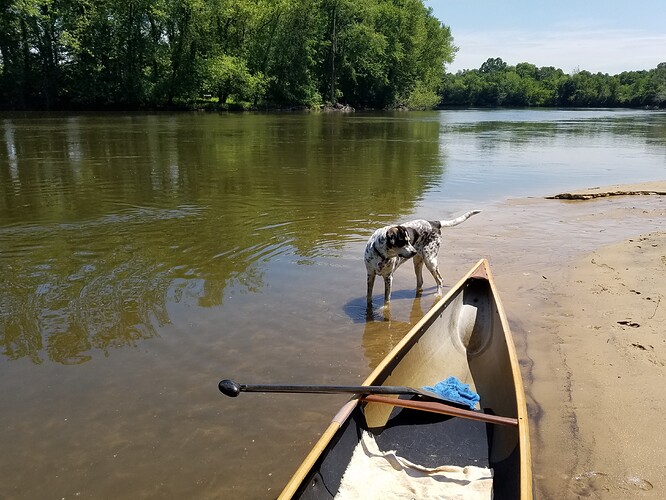 The flip side to this pandemic causing people to travel less as we slowly emerge from shelter in place activities is that people are looking at close to home activities to do. Shops selling entry level bikes, kayaks, canoes, et. are all selling out quickly. Bodes well as growth of paddlesports, but unfortunately will come at the cost of an increase in incidences as people learn the hard way that paddlesports has some risks that aren’t readily apparent to many novices.

Quoting the article: “…two adults and three juveniles were enjoying a summer day on a pontoon boat and were swimming in the water, when one of the juveniles began to struggle in the water. One of the adults jumped into the water and successfully rescued the juvenile, however the adult went under water and was not located.”

A terrible accident of being in the wrong place at the wrong time.

When I had my pontoon boat, flotation cushions were always at the ready when friends were swimming around the boat.

Yep, not paddlers this time. Just another case of folks overestimating their swimming ability or underestimating the danger of where they ended up swimming. And as Rookie consistently points out, another case where buoyancy aids could have made all the difference.

I don’t paddle with people that don’t wear life jackets.

It’s amazing to watch people getting ready to go paddling on the ocean up here in Maine where the water temperature is in the 50s at best and they are wearing shorts and t-shirts and in a very small kayak with no flotation (what I call a bathtub). We wore wetsuits and used our sea kayaks. An hour before these folks put in, we had wind, waves and a few small white caps scattered around. They put on suntan lotion to keep from burning but think nothing of the water temperature. I don’t think they were happy when I pointed out that they should add flotation to their boat for safety. Go figure.

Seems odd that this fellow apparently was a good enough swimmer to pull off a rescue and yet not good enough to get himself out afterwards. It could easily have been two drownings, so there is something of a plus side to this unfortunate story. It also seems odd that he would even attempt a rescue without first throwing on a PFD himself - it doesn’t take long. A few seconds thought might have made all the difference. But hindsight is always 20/20…
The last several drownings on the river where I usually paddle were swimmers as well, though one was swimming off a sandbar that he’d paddled to. Its been maybe six or seven years now, but there was one where several swimmers drowned in a failed attempt to save one who got into trouble - all in the same family. That was a heart-breaker. Is there any body of water anywhere where there hasn’t been a drowning?

Perhaps I’m showing a bias here, but when odd things add up to catastrophic results my first thought is always “was alcohol involved?” It so often is, even if the only role drink might have played is contributing a little to overconfidence on someone’s part. But we don’t know from the account presented, so best not to jump to conclusions.

That’s sad. I paddled that stretch of the St Joe river many times, from Jasper Dairy to Riverview. The first miles after Jasper Dairy have multiple turns, often with fallen trees. Even if the St Joe is slow-moving, one can easily get caught by a tree and be pushed down. False sense of safety, I guess.

Yes. I see a LOT of obviously unprepared and oblivious paddlers. A couple of years ago I ran into a young couple that was preparing to try their new Hobie pedal tandem for the first time…but they would have launched into a river at near record flood stage with very strong current. Fortunately the wife understood my hints and they didn’t launch.

Great point that pausing for just a moment to think is a good idea. I imagine that the rescuer underestimated the river and probably never thinks about PFD’s (or flotation cushions) but that’s speculation. I would also guess that the person that went in was whoever felt responsible for the child in the water and if it was me I’d probably dive in instantly no matter where it happened.

I agree that every body of water probably takes lives. The St Joseph sure seems to do it more regularly than the Huron I used to paddle around Ann Arbor. And it always seems to affect me more/longer when something happens so near by. Makes me think I wish I was there to help, or that hopefully something good can come out of the tragedy. The news says they fished his body out 1/2 mile downstream of where he went in which brings it to maybe in sight of my recently taken picture.

I’m on that stretch often and bump into sunken trees or tree limbs every time I paddle since I try to sneak along the shoreline to avoid the current going upstream. Maybe I’ll see you on the water some time. I’m the only guy in a canoe.

Ya’know, It now strikes me as strange that PFDs are required on board for all passengers on boats these days but I’ve never heard of any boats ever requiring throw bags. (Are there any places where they are?) For by far the greater part of my paddling life I never carried one either and I don’t think I’ve ever seen one on any of the jon boats, ski boats, fishing, or pontoon boats at any landing I’ve ever been to.
But now, after paddling for a while with whitewater folks, it just seems silly not to carry one. Yet, except for the whitewater crowd, nobody else seems to do so. It seems like such a simple and obvious thing to have for anyone on the water, yet where are they in practice? Seems like it might have been “just the ticket” in this case.

Granted, it takes a little practice to use one skillfully, but even in the hands of a complete amateur they offer a good chance of rescue in light of the fact that so many people have, but don’t wear, their PFDs. A second line of defense seems like such a small price to pay for a bit of extra insurance, so why is it so uniformly neglected?.

Besides, I’ve found that when I take kids out for a paddle and a swim in the river (in a previously scouted and relatively safe area) on a hot summer day, the throw rope suddenly becomes a favorite plaything. They love being “rescued”, hauled in fast, and its throwing practice for me - and I can always use more of that.

@TomL
I left St joe in 2017. I miss the lake. Besides the Jasper Dairy-Riverview route, I used to paddle Lincoln Township beach to Silver Beach or Warren Dunes (depending on the current and wind direction). I preferred to go south as it was almost all sand beaches but had to go around the Cook plant. If I was alone, I would just go to the Cook plant and back. I wonder if there is any beach left at Grand Mere with the Lake as high as it has been on the last years.

From a whitewater & tripping background I’ll usually have a throw rope when I’m in a canoe. It’s just a quick grab that pulls down a throw bag, a couple of carbiners, a couple of pulleys, a bailer, and a simple first aid kit all clipped together. I’ve moved my simple contact tow from the deck of a kayak to the side pocket of my PFD.

I agree with your thought process. I should probably carry a throw bag like rival51 does, I’ve thought about it. For a cheap extra layer of redundancy on a powerboat or pontoon boat a good old flotation ring on a rope would be another opton, or a lifeguard rescue tube. They might get used in an emergency since that is what they are for. The rescue tube is pretty versatile and is easy to swim with and has enough flotation for two people.

Throw lines/bags not required under any motor boat rules I am aware of, until you get to commercial boats maybe.

But motor boats generally go out with seat cushions which are there to be emergency flotation. Should be one per person in all states. I have to wonder why this story did not mention one being thrown. Unless they did not have them.

I carry a bailer and a throw bag cause most of my paddling used to be in Canada where both are required to be on paddlecraft. I have a bag with 50 m for flatwater and another with 100 m for whitewater. Plus my kayak hand pump.

Celia, you’re reminding me… I used to use seat cushions back in the old days when I paddled a Grumman all the time. Still use them sometimes with the Grumman when, for some reason of another, I have occasion to use it. (River clean-ups, for example.) I don’t think I’ve ever gone on a group paddle with those cushions that some righteously safety conscious person didn’t inform the ignorance that I am that they weren’t Coast Guard approved PFDs. As if anyone thought they were… Usually I’m wearing a PFD while receiving this enlightenment. Better just to smile, say thank you, and spit on the ground later.

Sometimes one just wants to cushion their butt. Perhaps Coast Guard approval isn’t necessarily required to do so on all occasions. And its just better if a cushion on a boat floats.