Another Rescue -- And Why Training and Safety Practice Matter 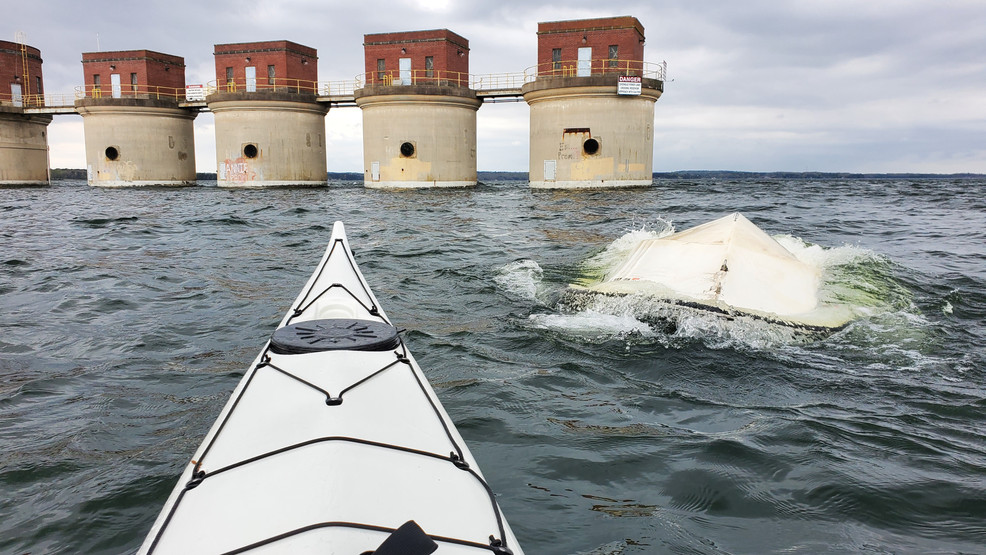 A scary situation on Lake Murray Saturday after a boat with two people on board capsized. Luckily, help was nearby. LOCAL FIRST |Bond denied for suspect accused of stabbing two victims in vehicle“I’ve been paddling for about 35 years and I don’t...

That’s great that he was there with the know-how and was able to get the boaters to safety.

Hmm. If the pontoon boat was not nearby… hope that he could maneuver the kayak with them hanging on to that pile of rocks? One guy at a time, the non-PFD one first? Then hope he had an emergency bivy stashed in the boat.

Very hard to gel distances between things though. Might not have been close enough.

Nice to see a happy ending. Good job by the paddler.

The distance to shore was probably within 200 ft, based on this satellite image of where those brick towers are and the shoreline: 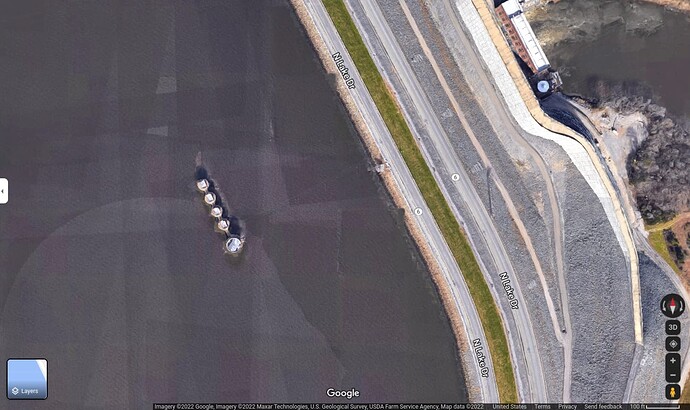 Again, without knowing all the facts of the condition of the men in the water, the type of gear the kayaker had on deck or readily accessible, I would not project too many assumptions into that situation. Suffice to say that the boaters were successfully rescued.

For me, it is worth gaming out in my head “what would I do or be able to do” had a pontoon boat not be around to assist in the rescue. The relevance is how would I train, prepare and gear up for the contingencies. And, the first order of business would be to ensure my own safety by knowing the parameters of my skills and physical conditioning. The more you “train” (meaning having some goal of sorts every so often, rather than just paddling around whenever you go out), the more you begin to know your parameters. Anyway, for me, that’s the start.

I would have been hesitant to paddle up to random people in the water like that for fear of getting capsized. In life saving class they teach techniques that keep you safe from non-swimmers that panic and want to climb out of the water on top of you.

Your point is well taken, I got the same training. Even more hard core, my last formal work was Junior Lifesaving so even a small panicked drowning person could have taken me under with them. The instructor passed us then told us never to get closer than the width of a big life saving ring.

But in good sea kayak training you learn how to use the kayak to keep yourself safe and to avoid having a swimmer take you over. It still can happen, and being safe still involves having a good brace. One time a supposedly seasoned woman took my instructions to get up on my back deck to mean I wanted her sitting up right behind me. After I got her out of the surf in the rocks where she had capsized I figured out that was why I was having to brace so damned much to stay upright. She was supposed to be laying low over my back deck.

In this case, the swimmers were already trying to hang onto their boat so it was just a matter of having them move to the kayak. They were a bit calmer than they may have been in other situations. The paddler had the two swimmers move to the end(s) of his kayak. While it is not fast, a solid sea kayak can be OK in surprising conditions with a swimmer wrapped around a bow or a stern.

As to making sure that is where the swimmer goes, if a dangerously panicked swimmer was flailing towards the cockpit you would probably want to put on a burst of speed backwards or forward fast enough that they could only get an end.

So, have a short tow line? Got a paddle float? Can these be used rather to get to the rescuee if one is not comfortable or concerned of being capsized.

Something to game out and to possibly to outfit/gear up with.

Sometime while playing in your kayaks in quiet water near a beach, get a buddy and practice towing/pushing a each other hugging onto a bow and then the stern. A kayak barely moves, but it does proceed slowly. I cannot imagine one hugging the bow and one hugging the stern - suspect one cannot maneuver…will have to try that next class.

As Celia pointed out, a swimmer (if they can climb on your backdeck and not capsize you) is very efficient though the paddler needs to be ready to brace almost continuously. It is a skill practiced extensively in most L4 classes. Since you cannot see the person behind you, it is imperative to keep talking to the person and direct them to remain lying on the back deck with their head as close to you as possible ( i like their head to be touching my back). Adding a 120-240 lb person to your back deck makes a kayak very wobbly - try it sometime (again, in very quiet water near a beach).

I think it’d have to be one at a time to move them. The real life question would be quickly assessing which one is safest to leave alone while you get the other one to shore.

But thinking about this kind of thing before it ever happens is still a useful exercise. In case you are in this kayaker’s spot.

Worked on that skill in 2015, the year after I started paddling. “Bulldozing” a person hanging on to your bow is hard work. Pulling the swimmer hanging on to the stern is a bit easier. 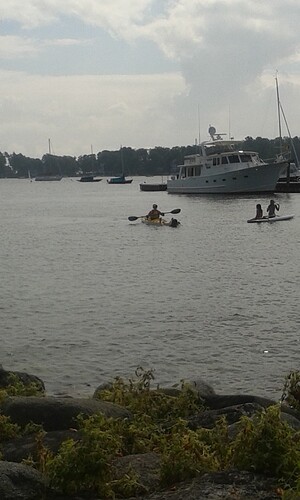 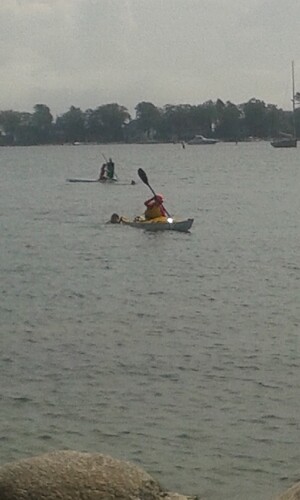 That is 180 degrees out from my experience. Plus, you cannot see the swimmer when they are dragging astern. Fortunately, either option is usually for a very short distance. If dragging, I would attempt to have the person climb on the back deck which is much faster paddling than bulldozing or towing…of course it takes more skill on the part of both paddler and swimmer. It is why we practice.

Each paddler needs to learn their own comfort level when conducting rescues. It’s important to have more than one tool in your toolbox.

I’m not entirely sure I would want to try to get someone who hadn’t practiced the skill to climb onto my back deck.

Team completion on a summer day:
For a team of 4 -

Lots of other ways to mix this up. Similar foolishness have occurred at the WMCKA symposium with the swimmers often being from the kids program.

So, have a short tow line? Got a paddle float? Can these be used rather to get to the rescuee if one is not comfortable or concerned of being capsized.

I’ll usually have a paddle float when I’m out in a kayak but I usually won’t have the waist tow pack along at the local lake unless we are practicing. I nearly always do have a short contact tow along though. That’s in a side pocket on my PFD just now as I’m usually in a canoe this time of year. I probably should make another so I will have on on the fore deck of a kayak.

I’ll usually have a paddle float when I’m out in a kayak but I usually won’t have the waist tow pack along at the local lake unless we are practicing. I nearly always do have a short contact tow along though.

For me, when I am surfing, I am carrying minimal gear as I am usually out on my own. I do have a dangling line from the stern to pull a swimmer for the rare occaison (I have only done this three times in almost 2 decades of surfing). So my practice for surfing really focuses on my rolling, bracing, re-entry and staying in shape to swim my own butt in (which I have to do several times).

Even when touring or kayak fishing, I am usually alone. But, in these situations, I still carry the full complement of self and assisted rescue gear, VHF, phone, etc. because I do see and run into other paddlers out there, especially in the summer. There were several MayDays by different paddlers in the areas that I frequent. I missed two rescues in the areas I was headed to by matter half an hour. I expect at some point to run into and having to provide assistance (or needing some myself). The challenge for me these days is that I don’t have regular paddling partners to practice with. So my focus is almost always on my own self rescue skills.

Agree completely…we always pick and chose who can get on a back deck. Unpracticed but athletic in appearance & relaxed in the water & communicative = I would ask them to give it a try…overweight and nervous in the water = no way it would be suggested, use a more cautious means to rescue.

That looks like a fun drill to practice with somewhat skilled paddlers.

In older times we messed around on ponds with extremes. Like putting a 6ft 4in and otherwise also big guy laying on the back of my Vela. A good bit of him was in the water.

While l stayed upright, it was quite clear that l was not going to move us anywhere. With this guy on the back the Vela, she had about half of the hull out of the water pointing out where the moon had risen.

I also vaguely recall doing a rescue of a fairly heavy, huge wooden canoe w/o flotation bags while in my shrimp Innazone 220. It worked on the pond, but like the huge guy on my Vela it likely would not have succeeded in anything bumpy.

Another silly idea got lots of witnesses. A fellow paddler was feeling a smidge bored on a local flat river paddle. We paddled in front of a large number of folks getting sculls into the water with another 16 ft canoe balanced perpendicularly across the front on my ultralight Merlin II. I think the paddler was in my boat. We got he and his boat deposited back on the water after we had entertained the folks on shore. Got impressive windage from behind.

Point being, some of this stuff may not be practical but it is fun to try.

Small females in a small kayak attempting to back deck carry a huge guy is a non-starter…good to learn that in a practice situation.

I call trying new things “stupid human tricks in kayaks”…it is fun to do when you have some willing and semi-agile paddlers messing around in kayaks in tolerably warm water. If it works in calm waters, then we try in in bouncy conditions. Lot’s of fun even at advanced age by date of birth.

Sometimes it gets closer to real. I had the pleasure of towing a nearly full of water 16’ tandem to shore on the Grand River last summer. Used my contact tow from my canoe. I had to make loud ugly noises to the previous occupant to make him let go as I wasn’t having much success with him hanging on to the stern of his canoe.

The paddler was paddling the canoe from the stern with half of it out of the water & flipped coming under a low bridge with a little riffle below. The picture below is from the next day shortly before he made the wise decision to join up in a tandem with another paddler. 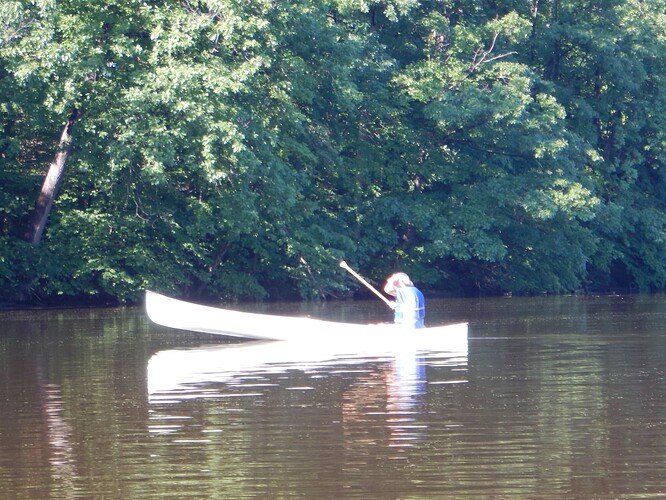