Anyone know the specs? 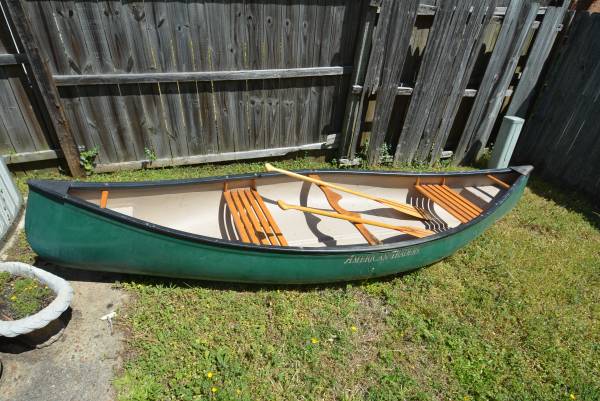 A 10 foot canoe is a bad idea no matter who makes it.
I agree that this is probably made to display. It would be okay for kids.

I’m 68, fly fish alone, on very protected, very small dammed lakes, city reservoirs that are probably not more than 200 yards across, a brackish back area of river with heavy reed channels, think Africa Queen, so I need a 15 foot canoe why?

The alternative are those blow up pontoon lounge chair boats.

I disagree. All depends on the design.

On the flip side, I had a 10.5’ OT that was not fun to paddle due to poor initial stability

Have you fished from it?

as far as specs, I’d think looking at it gives plenty of information. It’s not like it has a choice of engines, suspensions, or cabin arrangements. 10’ long, 2 seats, it’s green, appears to have vinyl gunwales and wood seats and thwarts. Good for doing wheelies if you solo from the aft, and probably be banging your knees if paddling it backwards from the forward. Kneeling from the forward looks doable as hull appears symmetrical enough. Personally, I’m thinking it was designed for kids, thinking a boat that short will be very sensitive to an adults weight placement.

The only time I have seen one before was years ago at a retail trade show. I think it is a display canoe. You see them from other brands from time to time hanging on the wall at an outfitter. They were used to show the construction of boats when fiberglass and plastic boats were a new thing. I was in an outfitter in Arkansas not long ago and they had one full of can koosies, but it was a different brand.

That was my first thought when I saw it the other day as well, only I had no idea if they had show samples and such.

It may have some value as a rare find but if not and someone wanted to use it I would be tempted to putting a kayak seat near the center and kind of make it into a OT Next.

Exactly what I thought it was, looked like a large salesman sample, something to hang in a Bass Pro, the second seat, strange in 10 foot.

Moot point, thing sold within hours of posting. The manufacturer had zero information on it.

It looked like a round bottom with good secondary buoyancy, something their real canoes have.

I’m no fan of flat bottom, flat sides, the tricycle experience, feels safe until you hit an incline.

Around here you may encounter the idiot that can’t read a No Wake Sign nor notice a low riding vessel.

Best to be able to have a hull that can roll with that.

You never know, a small short canoe for real use, there are a few examples, exceptions. Just to $$$ at being retired for me, to build or buy new.

I’m aware of the problems with short, but as I say where I live on a long 80 mile peninsula with nothing but dammed small lakes, and areas of high back river reeds, tight Dutch like Africa Queen channels, good fishing, a small canoe beats a blow up pontoon boat, we do have a water moccasin problem, or a wet kayak.

It is probably a bit wide to sit in the bottom of. I would 86 the rear seat and relocate the front seat closer to center and remove the yoke. Then you could use either a single or double blade. It would be fine for fishing ponds and lakes or a moving stream. Anyplace where you don’t really need t to track straight.